A tragic end to storytelling

By Raksha KumarMarch 7, 2014 No Comments

The TTP prepared a “media hit-list” which includes the names of journalists, media-group owners, the news heads of television channels and prominent anchors 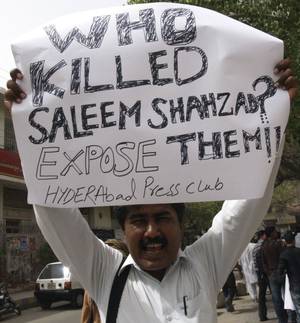 Pakistani journalists have been killed at a rate of roughly one every 30 days for the past six years, according to the Pakistan Federal Union of Journalists. Pictures shows a journalist protesting against the killing of a journalist, Syed Saleem Shahzad, in Hyderabad, Pakistan, in 2011. Photo: AP

In many ways, the Pakistani media today is a microcosm of liberals in Pakistani society. The rules of the game they play are defined by fierce extremist forces, a fragile government and a dominant military. As a result, liberal voices in society prefer to silence themselves rather than fight a losing battle.

“It is almost as if the Pakistani media is left with no option but to self-censor,” says Ayesha Siddiqa, an Islamabad-based political commentator.

The past two years have been particularly thorny for the Pakistani media with many journalists being killed or threatened at gun point. In January, Reporters Without Borders, a non-profit organisation which defends the freedoms of journalists, ranked Pakistan among the five deadliest countries for the media, just behind Syria and Somalia. Pakistani journalists have been killed in the line of duty at a rate of roughly one every 30 days for the past six years, according to the Pakistan Federal Union of Journalists.

The Tehreek-e-Taliban Pakistan (TTP) issued a fatwa against the media in January, and prepared a “media hit-list” which includes the names of journalists, media-group owners, the news heads of various television channels and prominent anchors.

The death of truth

“In a state of war, the first casualty is truth. Both the government and the extremist forces do not want truth reported,” says Haroon Rashid, editor, BBC Pakistan. “Hence we are threatened and silenced.”

Senior journalists in Pakistan agree that the self-censorship exercised by the Pakistani media is subtle. For instance, after the killing of Punjab governor Salman Taseer in 2011, for his opposition to the blasphemy law, several newspapers stopped calling this law the Black Law. They fear to do stories against the law.

Several Pakistani watchers say the situation has been tense for the media since 2001, when the NATO forces invaded Afghanistan, the repercussions of which were felt in bordering Pakistan. However, the extremist forces gained momentum and intensified as the years passed. In 2007, when various Islamist groups in the Federally Administered Tribal Areas of Pakistan that border Afghanistan formed an umbrella organisation called the TTP, the region effectively closed its doors to independent reportage. Mr. Rashid, who reported for the BBC from FATA in 2007, recalls being threatened by the tribals and the military alike. Now the FATA remains a black hole as far as news outflow is concerned. Any news that emerges from there is either military propaganda or the voice of some extremist force.

Though there are independent media outlets in other parts of the country, self-censorship is pushing them the FATA way. “If there is no fearless reportage, it doesn’t matter if you have an independent media. That becomes a farce,” says Ms Siddiqa.

Journalists admitted that they are pressured by the government to not report on the extremist non-state actors like the TTP, as the government feels it would give such groups legitimacy. The TTP killed 23 Pakistani soldiers in February, which stopped peace talks between the government and the organisation.

“But before February, the government gave the TTP legitimacy by talking to them for so long,” retorts Mr Rashid.

This has brought the Pakistani media to a state where they are being forced to report extensively on the extremist forces. The editor of a Karachi-based Urdu newspaper, who asked to remain anonymous as he fears for his life, said he prints handouts and leaflets by the TTP without editing, to ensure that his newspaper remains afloat. Even most of the large newspapers that are Karachi-based steer clear of criticising the Muttahida Qaumi Movement (MQM) as they want to avoid trouble, says Ms Siddiqa. The Sindh-based political party has had a long history of violence.

The media hierarchy in Pakistan resembled that of India’s for several years — English language news outlets had little influence over the masses. Their target audience was the intelligentsia and a limited English-speaking population. However, in recent times, the militant forces have realised that English media outlets influence policy much more than the Urdu press as they have access to the people in power. They have begun to target them systematically as well.

The Express Media Group that reported extensively on religious freedom, minority rights, gay rights and child abuse is now facing the heat. The group which owns The Express Tribune, Express News, and the Urdu-language newspaper Roznama Express has declared on record that it will regulate its opinion columns which are “rather too liberal,” though it maintains that its news reportage hasn’t changed, despite pressure from the extremist forces. “We have become more cautious in how we approach stories that relate to militant organisations. But we have not censored any news story. We cannot do that,” says Kamal Siddiqi, editor, The Express Tribune.

“In January, a friend’s mother was killed by the Taliban in Kabul and I was so angry that I wrote an article articulating my anti-Taliban stance. I called for ordinary Pakistanis to counter the violent extremist narrative by committing to save one human life before they die. This article was turned down by The Express Tribune because three of its staffers had been shot at the same time,” says Muhammad Bilal Lakhani, a columnist for the paper.

Three staffers of the Express Media Group were gunned down in January, and the spokesperson of the TTP immediately claimed responsibility for the attacks. The Express Tribune has been attacked three times in the past six months.

The situation in Pakistan today, according to some analysts, is worse than in the 1980s when the country was under General Zia-ul-Haq’s regime. State-sponsored censorship was the order of the day then and there was forced regulation of media content. “During the 1980s, the newspapers refused to print if there was no freedom,” recalls Ms Siddiqa. “I remember seeing blank front pages of the Dawn back then.”

There seems to be general resentment towards the Pakistani establishment. Everyone from the Urdu media to the English media feels that the government needs to do more. “If the government gave confidence to the media and did not ask us to fend for ourselves, we could have stood up to the militant forces,” says Mr. Rashid.

Power of the social media

The Express Group, which faced flak recently from the civil society for openly stating that it was censoring its opinion pieces, says there is little media solidarity as well. The solidarity they received was from sections of the social media.

The freest of debates in Pakistan happen on social media. Though the social media’s penetration is limited to a few urban areas, it is slowly beginning to make inroads into other parts of the country. The social media is also giving voice to people who earlier struggled to have their say in policy matters. Several members of the Pakistani media believe that the social media, which is difficult to censor, could be the redeeming factor in the future.

Pakistan seems to be caught in a classic catch-22 situation. The country needs a robust media to support its groping democracy and a strong democracy to ensure a free media. Amidst this conundrum, the future of this neighbour could remain a cause for concern to India, given its political uncertainties in this election year.

Published in: The Hindu
Published on: March 7, 2014
Link: http://www.thehindu.com/opinion/op-ed/a-tragic-end-to-storytelling/article5757462.ece?homepage=true