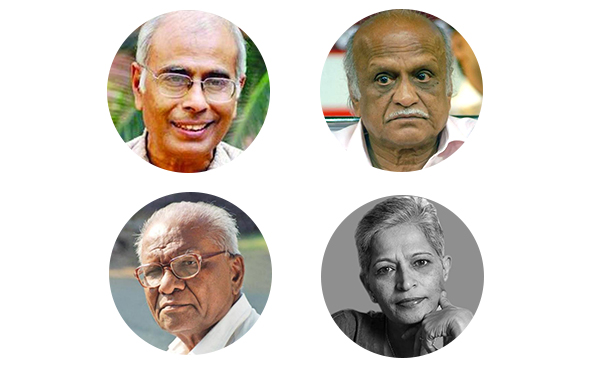 Despite all the evidences of criminal activity against the members of the organisation, the question remains – why is it not banned yet?

Disregarding the torrid summers of Wardha in the Vidarbha region of Maharashtra, a crowd gathered to listen to Prime Minister Narendra Modi campaign for his party earlier this year, just before India went to vote.

No one was disappointed.

In his characteristic roaring voice, broken sentences and predictable dramatic pauses, Modi announced that Hindus were never involved in terror activities. “Is there a single incident in the history of thousands of years of Hindus engaging in terrorism?” he asked on April 2, 2019.

While the crowd seemed to agree with him, influential voices on Twitter strongly disagreed. Many highlighted the most obvious example of Nathuram Godse, an RSS pracharak who killed Mahatma Gandhi in cold blood, others questioned the activities of organisations like the Sanatan Sanstha.

Clearly such speeches worked their magic because the Bharatiya Janata Party won the elections with a massive majority and formed the government in May. Since a large number of people believe that certain Hindu organisations would not use mindless violence in the name of religion, a deeper look at organisations like the Sanstha is warranted.

The Sanstha and its affiliate Hindu Janajagruti Samiti, claim to work towards “creating a Hindu Rashtra”. A country for and by Hindus, where people of other religions will be relegated to second class citizens. Their idea of Hinduism is a homogenous society, with north Indian ideas of Hindu Gods and traditions.

The Sanstha organised the first All Indian Hindu Convention “for establishment of Hindu Rashtra” in June 2012 at Ramnathi, Goa. In the second Akhil Bharatiya Hindu Adhiveshan in 2013, Narendra Modi, who was then Gujarat’s chief minister sent in public greetings and support through a letter.

In order to usher in the Hindu Rashtra, these organisations have not shied away from violence.

Members of the Sanstha and HJS have been accused in bomb blasts in Maharashtra and Goa, named for murders of four well-known rationalists in Karnataka and Maharashtra, convicted under the ruthless Unlawful Activities Prevention Act and held responsible for recovery of massive amounts of explosive material.

In December 2018, the Anti-Terror Squad of the Maharashtra Police filed a case charging twelve members of the Sanstha under the UAPA, after it recovered explosives in Nalasopara, a town within the Mumbai Metropolitan Region.

The chargesheet alleges that those arrested and charged wanted to disrupt the Sunburn Music Festival in Pune. It reads, “the terrorist gang had planned to use country-made bombs, petrol bombs, firearms and engage in heavy stone pelting in order to send a strong message to the followers of western music and culture, and terrorise the minds of all those who would attend the said programme.”

Even though all major political parties – including the ruling BJP, Congress, Aam Aadmi Party, Nationalist Congress Party, Communist Party of India and CPI (Marxist) – have called for a ban of the Sanstha, the organisation seems to be thriving.

The Sanstha is headquartered in Ramnati village of Goa, where there is palpable dissatisfaction among local residents who want the organisation relocated elsewhere.

Yet, the ban is nowhere in sight.

In the light of the Prime Minister’s brazen claim that there is no “Hindu terror” or unjustified violence in the name of protecting (and promoting) Hinduism, investigations into the Sanstha is critical. The moot question is what do Hindu fundamentalist organisations mean to Indian polity and how is their violence justified.

Members of SS and HJS

In 1999, a hypnotherapist Dr Jayant Balaji Athavale set up the Sanatan Sanstha as a charitable trust. In the initial years, the Sanstha was disregarded as a fringe organisation that uses hypnosis for the propagation of Hindu Rashtra.

Today, a massive white and yellow building is sandwiched between Shantadurga Temple and Ramnathi temple in the Goan village. A few CCTV cameras peep out of it, surveying the road. Any one lingering around the building for a suspiciously long time is approached by a security guard and asked to leave. Requests by the media for an interview reaches the official spokesperson, Chetan Rajhans and no one else is authorised to speak.

“Why is a religious organisation so secretive?” asked Kumar Ketkar, journalist and politician from the Congress party. “What do they have to hide?”

Most of the members of the Sanstha are from Maharashtra, Goa and northern Karnataka, said a resident of Ramnathi who sought to be anonymous as he fears repercussions from the Sanstha. Books and literature from the organisation are also predominantly in Marathi, Kannada and Hindi.

According to a local journalist who has researched the Sanstha, the members, called Sadhaks or those seeking to achieve (spirituality), are carefully chosen. “The Sanstha cannot afford to have people who question their objectives or methods,” he said.

Seniors in the organisation identify vulnerable individuals who lack self-esteem, said Vijay Namdeo Rokade, a resident of Khopoli near Panvel. Rokade, along with four others, filed a petition in the Bombay High Court seeking to ban the Sanstha in 2011. The case is ongoing.

Rokade was married to Sunanda Kapade, an Aurangabad-based engineering graduate in April 2007. Months later, he discovered that Kapade was a member of the Sanstha. Since her activities seemed “suspicious”, he began researching the organisation and was convinced that members are brainwashed. “These members will do anything the Sanstha asks them to,” he said.

Academic research on fringe fundamentalist groups confirms that the recruits are individuals with low self-esteem who are looking to establish a strong identity of their own.

According to a paper titled The Psychological Processes and Consequences of Fundamentalist Indoctrination by Josh Cuevas of the University of North Georgia, “indoctrination takes place when one circumvents reasoning and imparts a way of thinking based on something other than the force of evidence, so that the child (person) holds the beliefs irrationally, without regard for evidence.”

In the case of the Sanstha, the members are looking to form their identities as those Hindus who have a larger purpose – to protect the entire Hindu community from extinction or subjugation.

“This also explains why members are willing to stock explosives and use weapons,” said Megha Pansare, Professor of English at Kolhapur University and daughter-in-law of Comrade Govind Pansare, who was shot dead for his rationalist beliefs in February 2015. The accused in Comrade Pansare’s killing are allegedly members of the Sanstha.

When members of the Sanstha were named in the 2008 blasts in Malegoan town of Maharashtra, law enforcement and civil society first began to take notice of the group. A lower court sentenced two sadhaks to 10 years’ rigorous imprisonment for a blast in Thane and for planting a bomb in Vashi.

The very next year, two other sadhaks were killed in Goa when a bomb accidentally exploded in Margao, Goa. Now, the Sanstha was clearly in the view of the law enforcement agencies.

A Marathi book titled Kshatra Dharma Sadhana, authored by Athavale is considered to be the bible for the sadhaks. Among other things, the book has a list of strategies that a good Hindu can use to usher in the glorious Hindu Rashtra. One significant way to do so, the book says, is to eliminate the ‘durjan’ or evil people.

“The members take the book very seriously,” said Rokade. Murders of four prominent rationalists have been linked to the Sanstha.

In August 2014, Rationalist and founder of Maharashtra Andha Shraddha Nirmulan Samiti, Narendra Dabholkar was murdered in Pune. In February 2015, CPI leader Govind Pansare was shot at and killed in Kolhapur and a few months later Professor MM Kalburgi was killed. In September 2017, journalist Gauri Lankesh was shot at inside her house by gunmen who later confessed to have been part of a Hindu fundamentalist organisation, with ties to the Sanstha.

The Karnataka Special Investigation Team, looking into the murder of journalist Gauri Lankesh, released a Forensic Science Lab report, according to which the same gun was used to kill Kalburgi, Pansare and Lankesh.

“The organisation passes on the same weapon perhaps because they are superstitious about it,” said a senior police officer who was investigating the cases in Pune. “Since they got away with the first murder, they feel they can get away with others as well if they used the same ‘lucky’ weapon” he added.

Journalist Nikhil Waghle, who has been slapped with defamation suits by the Sanstha agrees. In a panel discussion in August 2018, he announced publicly that the law enforcement had failed. If the police had acted fast and made quick arrests in the Dabholkar case, the other lives could have been saved, he said.

Karnataka SIT arrested Amit Degwekar, a resident of Sanstha’s ashram in Ponda, Goa, in connection with Lankesh’s murder. Degwekar is identified as the promoter and editor of ‘Sanatan Prabhat’, a publication of the Sanstha, He is an accused in the Dabholkar and Pansare murders as well.

The supplementary chargesheet filed by the CBI in the Dabholkar and Pansare cases calls the murders and act of terror, said Abhay Neogi, senior advocate who is representing the families.

Despite all the evidences of criminal activity against the members of the organisation, the question remains – why is it not banned yet?