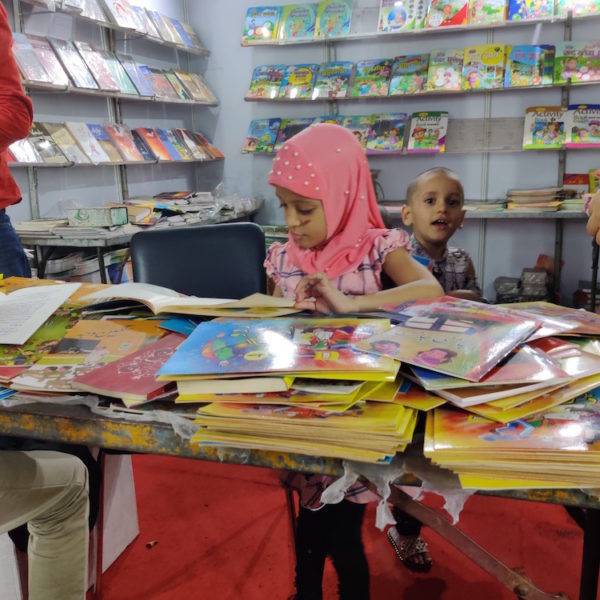 Armed With Protest and Poetry, a Muslim Ghetto in India Fights Back

By Raksha KumarMarch 4, 2020 No Comments

A wide main road cuts across the length of Mumbra. Materials from half-constructed buildings spill into the street throughout this town in western India. Vendors dot the sidewalks, and rickshaws pick up customers in the middle of the road, blocking the way for cars and pedestrians. The smell of fried snacks and a cacophony of noises engulf the busy area.

Like much of India, Mumbra is crowded: 900,000 people live on a piece of land that measures 10 square miles. What sets Mumbra apart is that 80% of its population is Muslim, and it is considered India’s largest Muslim ghetto.

For decades, Muslims have moved to Mumbra — a town about 18 miles from the large city of Mumbai — usually to escape religious violence in Mumbai and other parts of India. But since December, the people of Mumbra have lived in an especially charged environment. That month, India passed the Citizenship Amendment Act, which provided citizenship rights to several religious minorities from Pakistan, Bangladesh and Afghanistan — but which excluded Muslims.

The law attacked India’s constitutional principle of secularism, and critics say it realized an age-old dream of the country’s Hindu nationalists: subjugating Muslims and making them second-class citizens.

Spontaneous anti-government protests immediately broke out across India. Police beat protesters and attacked them with water cannons and tear gas, and almost three months later, the demonstrations are continuing as the government implements the law. In late February, violence connected to the protests claimed at least 42 lives in the capital city of New Delhi. Witnesses say police often did nothing as mobs of Hindus killed Muslims, but when the crowd was Muslim, police reaction could be brutal.

An underlying climate of Islamophobia prevails throughout the country, shaping social interactions, professional settings, even basic livelihoods. Given this politicized, polarized climate, residents of Mumbra share what it’s like to be Muslim in India today.

The new legislation spurred people to action in Mumbra in unprecedented ways. Almost every day since the law passed, residents have taken two-hour train rides to reach protest sites in south Mumbai and demonstrate with thousands of others. They also have organized marches within their town and created safe spaces to discuss issues of identity, religion and politics. (Although the protesters in Mumbai are from various religious and ethnic communities, most of those who make the journey from Mumbra are Muslims.)

“Our sleepy little town was perhaps never so politically charged,” said attorney Shamim Hussain, who has lived in Mumbra since 1961.

The protests have brought people together in new ways. “Now, my best friend is … 62-year-old Nasreen kala (aunt),” said 16-year-old Yusra Mirza. The pair go to demonstrations together and talk at length about how they should resist injustice.

Mirza and many of her peers have become actively involved since the passage of the Citizenship Amendment. “These protests have certainly made the youth of Mumbra more politically aware,” Hussain said.

For decades, Mumbra has been a place of refuge for Muslims in the aftermath of religious violence. In December 1992, Hindu supremacists — mostly from the Bharatiya Janata Party (BJP) — led a mob that demolished the 16th-century mosque in Ayodhya, a city in northern India. That incited religious riots between Hindus and Muslims in Mumbai (then Bombay) and prompted retaliatory bomb blasts by Muslim members of the underworld in January 1993.

Violence over those two months killed nearly 700 people, mostly Muslims, and as a result, thousands of Muslims moved to Mumbra. Since then, any small or big act of violence against Muslim communities led more people to relocate to Mumbra, which has been relatively free of religious violence. “We find strength in numbers,” Hussain said.

Hussain said the “Muslimization” of Mumbra drove out most of the Hindus who used to live in the area. “They didn’t move out because they were afraid to live amidst Muslims,” he said. “They just moved because it was uncomfortable for them in largely nonvegetarian neighborhoods or where they hear the Azaan (Islamic call to prayer) five times a day.”

Although Muslims feel a certain sense of safety in Mumbra, since 2004 they have also felt their town could become a target at any time. In that year, police killed Ishrat Jahan, a Muslim teenager who lived in Mumbra. They claimed she was a member of a terrorist organization plotting to kill Narendra Modi, who is now India’s prime minister. Although there was little evidence of a conspiracy, since then right-wing political parties have called for Mumbra to be “cleansed” because its youth could be terrorists.

Mumbra is a true ghetto — with the implicit living conditions. The definition of “ghetto” has become loose today, according to Christophe Jaffrelot, a French political scientist who specializes in South Asia. “We must reserve it for designating the gathering together of members of a community (in this case, Muslims) irrespective of their other social markers (class/caste or ethnic origin, for instance) in a locality insulated from the rest of the city … where state services are not maintained properly — if at all present,” he wrote in his book “Muslims in Indian Cities: Trajectories of Marginalisation.”

For example, Mumbra is crisscrossed with open drains almost all over the town, posing a massive health hazard.

The town is also filled with substandard buildings that were constructed in a hurry — and not according to code.

“There was a sudden influx of people after the [1992] riots, and they needed housing urgently,” said Shireen Dalvi, a journalist and resident of Mumbra since 1974. “Moreover, they were poor and had come with very little on them.” So builders used cheaper materials and built quickly, and the result was unsafe housing. In 2013, a building collapse killed 74 residents, and several other buildings have also collapsed, causing fewer casualties. Still, families continue to live in dilapidated conditions.

Until 2001, Mumbra had no access to clean drinking water, and electricity outages were common. There were very few primary schools or high schools, and health care was scarce. “I remember a pregnant lady would have to hail down an auto rickshaw and head to neighboring Thane city to access decent maternity facilities,” Dalvi said.

Today, Mumbra has half a dozen colleges and about 36 primary and high schools. One government health facility and several private hospitals have been built. The economy of the town has improved somewhat because many families in Mumbra have members working in Persian Gulf countries. But in the town itself, unemployment is a major problem that stems in large part from anti-Muslim factors. Between 2014 and 2017, beef trade — a major source of livelihood for the Muslim community — was banned in a few states, including Maharashtra, where Mumbra is located.

Mumbra, which already suffered from chronic unemployment, was hit hard by the ban. A large number of meat transporters, resellers and butchers were left without work. Although the Supreme Court reversed the ban in July 2017, many fear returning to the trade because Muslims have been attacked and/or killed on the suspicion of storing beef or trading cows.

“We see people merely sit around all day on the footsteps of function halls [and] mosques and do nothing,” said 22-year-old Yusra Bano, who works as a sales clerk in a mall in Thane.

It is common to see young men and women do drugs at street corners, which many in Mumbra attribute to the lack of opportunity. Young Muslims complain that they are discriminated against and denied work because of their religion. As a result, hundreds of young men in Mumbra are low-paid cab or rickshaw drivers.

“[Mumbra] feels like the state of the Muslim community in India today,” said Rehman Abbas, a scholar and activist who has studied Indian Muslims. “We are better-educated than previous generations and have reaped health care benefits, but unemployment and a general lack of opportunities affect our youth adversely,” he said.

Being Muslim in Modi’s India

Critics say the 2019 citizenship legislation was the most recent step in a multiyear crusade by BJP leaders Narendra Modi and Amit Shah to wipe out the lives and livelihoods of Muslims across the country. The series of assaults has angered and demoralized residents of Mumbra.

Since Modi was elected to power in 2014, thugs supported by the BJP have killed dozens of Muslim men. Pehlu Khan, a Muslim dairy farmer, was lynched in the northern state of Rajasthan in 2017 because he was suspected of smuggling cows.

Ajmal was enraged. “I knew he was targeted only because he was Muslim and [for] no other reason,” he said. “That was his crime: being Muslim.” (Ajmal, who works in an electrical shop in Mumbra, requested that his last name not be used in this report.)

Immediately after Khan was killed, Ajmal and his friends gathered to plan an attack on the offices of Bajrang Dal, a Hindu militant organization. But their families stopped them. “Why do you want to start a war?” Ajmal’s mother asked him, and that made him abandon the effort.

In May 2019, Kashmir — India’s only Muslim-majority state — was stripped of its special autonomous status overnight and put on a 140-day lockdown, crippling its economy and frustrating its population. This represented a wider issue to the residents of Mumbra. “Muslims cannot be independent in this country anymore,” said Abid Dalvi, a student and rapper. “The message is loud and clear.”

Shortly after Kashmir’s autonomy was withdrawn, the Supreme Court of India issued a ruling in the decades-old dispute involving the Ayodhya mosque that had been destroyed in 1992. While acknowledging that the destruction had been illegal, in November the court ruled in favor of the Hindu petitioners and ordered a temple be built on the site.

Past offensives against minorities — especially Muslims — created small splashes and smaller ripples. But the recent citizenship law has unleashed the strongest backlash and united many sections of society in Mumbra and elsewhere. “We were living in relative poverty and deprivation anyway,” Dalvi said. “Citizenship and identity are perhaps the only things we have. We will fight for them.”

Hindus, Muslims and people of other faiths are walking together, singing resistance songs and reciting poetry that celebrates the secular values of India. As a particular symbol of hope, young people are playing a big part.

“With the latest protests … it almost seems like the youth of Mumbra have come together,” said Abdul Hamid, a 22-year-old Mumbra-based poet. “Every young boy and girl has become a poet, writing songs about the death of secularism in independent India.”