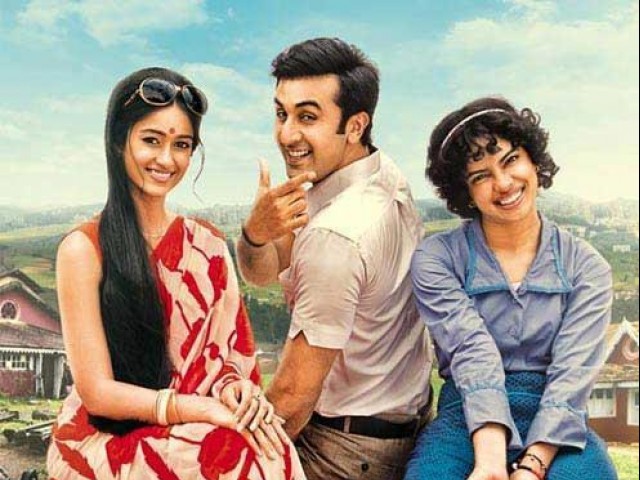 Barfi!: A sweet cine-treat for all

By Raksha KumarSeptember 21, 2012 No Comments

For someone who had not seen the rushes, Barfi! was a pleasant surprise. When I walked into the theatre I was unaware that I was about to watch a film where the lead actor had a speech and hearing impairment, and that the lead actress was autistic.

About ten minutes into the film, when the audience is told that Barfi, Ranbir Kapoor’s character in the film, had severe impairments, I braced myself to watch another emotive movie that would leave me crying profusely and feeling sorry for the differently-abled.

Until the end, I kept waiting for that moment.

The film manages to constantly put a smile on your face and gently sprinkles bouts of laughter in several scenes.

Director Anurag Basu had proven that he understands the myriad complexity of human emotions when he made Life In A Metro in 2007; with Barfi!, he has gone a step further.

Barfi had all the reasons to be a traditional Bollywood tragic hero – his mother died at birth, he’s poor and penniless through his youthful days and is left brokenhearted by a rich girl. However, Barfi is different and so is Jhilmil, Priyanka Chopra’s character, an autistic child who is loveless and companion-less for most of her screen life.

Attempting to carefully understand the lives and needs of autistic and differently-abled people, Basu has pulled his lead characters out of their traditional roles in a cry-fest.

Ranbir Kapoor is not only the current hot-favourite among the girls, but has also been consistent in getting critics’ accolades. This is another such performance which can bag a huge chunk of the awards next year.

At the start of the movie, where Ranbir Kapoor is being chased by a policeman, played by Saurabh Shukla, Ranbir’s expression of youthful carelessness and joy comes alive on the screen. The scene is also shot wonderfully well with interesting camera angles, and contributes a great deal in building up the pace of the movie.

I felt, however, that Priyanka Chopra has overdone her bit. The worst criticism for an actor is when the audience can see the actor as being separate from the character, and that is exactly what Priyanka does in several scenes. Jhilmil is lost (or overdone) reminding the audience constantly that they are watching Priyanka Chopra’s pretence. The scene when Jhilmil is brought back home from ‘Muskaan’, a foster home for differently-abled people, exemplifies my point.

South Indian actress Illeana D’Cruz surely gets into the skin of her character named Shruti, who is also the narrator of the story. She is crafty, both at the romantic scenes and at the emotional ones.

More than once during the 180 minutes, the audience is caught sitting intently on the edge of their seats, predicting the character’s next move. Some of those moments are when Shruti holds the train ticket in her hand and is deciding whether to leave her life as a wife of a rich man behind; when Shurti hears Jhilmil scream out Barfi’s name and is in the dilemma of whether to convey that to Barfi, and the scene in which Jhilmil runs behind Barfi’s moving bus.

The music is exceptional and keeps in tone with the changing mood of the film. Music director Pritam does the trick again in getting the music just enough attention that is required. The songs do not take away attention from the scenes, neither are they too insignificant that they go unnoticed.

Barfi! is an enjoyable watch, mostly because it springs a surprise on the audience and let’s them carry a sweet, happy feeling back to their homes.

Published in: The Exrpess Tribune
Published on: 21 September, 2012
Link: http://blogs.tribune.com.pk/story/13987/barfi-a-sweet-cine-treat-for-all/