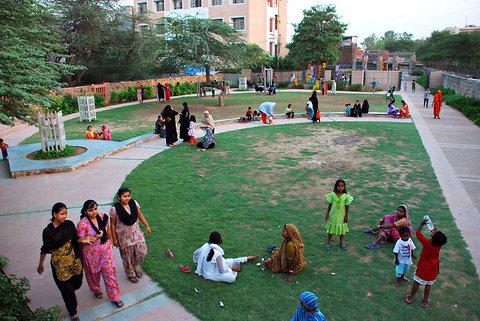 For Muslim Women in Delhi, a Breath of Fresh Air 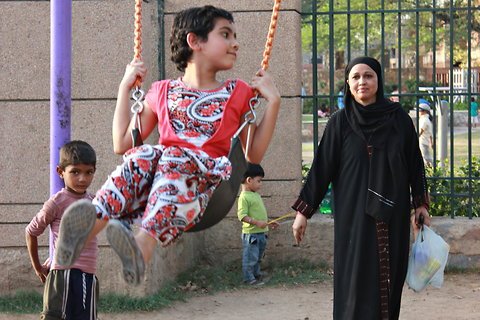 Yasmeen Khan, right, at the “Pardah Bagh,” a park exclusively for women and children in Nizamuddin in south Delhi. Photo: Raksha Kumar for The New York Times

Yasmeen Khan dons her burqa and steps out of her house in the Nizamuddin neighborhood of Delhi every evening to walk a short distance to a 10-foot-high stone wall. Behind the wall is paradise — a place where she can remove her burqa and hijab, enjoy cool fresh air in her hair, exercise and gossip with friends.

Hundreds of women regularly visit the “Pardah Bagh,” a park as large as a football field, exclusively for women and children. While there are other parks in the city marked only for women, particularly in Old Delhi, they are usually unkempt and frequented by men.

The women’s park in Nizamuddin is being maintained by the Aga Khan Trust for Culture, a non-profit group which has been working with the Municipal Corporation of Delhi to redevelop the Nizamuddin slum area for the past five years. “The concept of a ‘Pardah Park’ has existed in traditional Muslim societies across the world,” said Shveta Mathur, an architect and the program officer for the trust, “however, this is the first such park in Delhi that is well developed and extensively used by the community.”

Women and children come to relax at the ‘Pardah Bagh,’ in Nizamuddin in south Delhi. Image: Courtesy of Aga Khan Trust for Culture.

Mrs. Khan said she used to feel locked up inside her one-room, ground floor house, because she would not leave her home alone. “I only went out when my husband came back home early in the evening,” she said. “I craved for some open air, as did my children.” 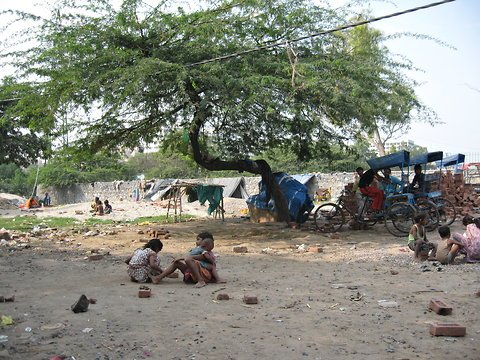 The open dumping ground which existed at the site of the park before it was developed. Image: Courtesy of Aga Khan Trust for Culture

“Sometimes the lanes are so narrow that I have to angle myself to pass through them,” Ms. Mathur said. Because of the dense population and faulty sanitation, tuberculosis and asthma are common. “During community meetings we realized that many women wanted open spaces in their neighborhood and the freedom to be able to go there,” said Ms. Mathur, who also is an urban planner. Before the women’s park was developed, it was an open dumping ground.

“The green stretch of the park is a bit of a solace in the ever-busy, overcrowded slum,” said Jahaanarah, a 32-year-old woman who said she only goes by her first name and who frequents the park with her four children.

The park is divided in half, and the area farthest from the road has been turned into a children’s play area. “The kids fight all the time to use swings and slides first,” said Mumtaz Begum, the 42-year-old caretaker of the park. The other has exercise equipment for the women to use, including a thigh-firming machine. “Women come here to be burqa-free in open air,” said Ms. Begum, “but also to exercise. They are all health conscious.”

Farida Khannum, a professor of Islamic history at the Dr. Zakir Husain Institute of Islamic Studies said the women’s-only park is a welcome addition to Delhi.

“The cultural background and the social setup of these women is such that don’t mingle with men, even socially, the way women in other parts of the city do,” Ms. Khannum said. “Their idea of personal space is different.”

“If the park had not been exclusively for women, the smiles you see on these women’s faces would not be there,” she said. “If you want to service the community, it should be according to the needs of the community.”

On most evenings, Mrs. Khan takes care of her two children, but on a visit to the park this week, she had the responsibility of four more. “They are my sister-in-law’s children,” she said, lightly pushing the swing her daughter was sitting on. “Life used to be hell when relatives came to our tiny home in large numbers,” she said. “Today I have an escape from every frustration and sorrow. I come here and forget the world.”