By Raksha KumarNovember 4, 2014 No Comments 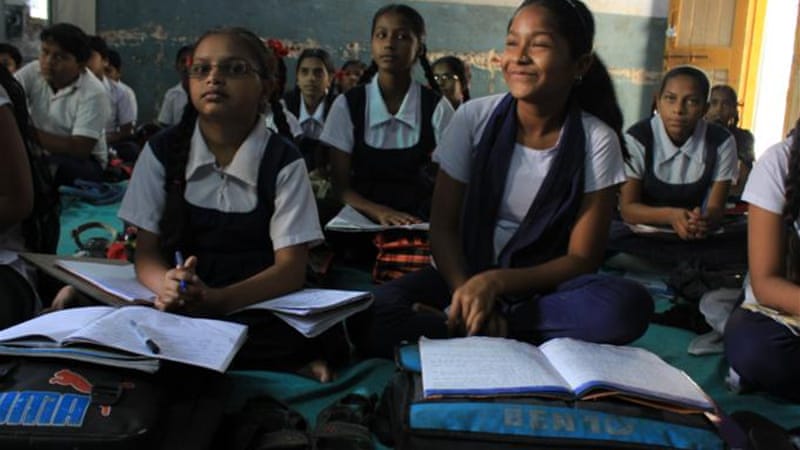 Ahmedabad, Gujarat – You cannot blame Bhavana Vaja, 12, for telling you that the first aeroplane was invented during the mythical Dvapara Yuga, when the Hindu God Ram flew from Sri Lanka to Ayodhya in India with his wife Sita and brother Laxman in a Pushpaka Vimana – a swan­-shaped chariot of flowers.

By claiming that they familiarise students with India’s ancient heritage, some books printed by the education department of western Gujarat state teach children that aeroplanes existed in India since Lord Ram’s era. And that is just a sample of how religious content is included in science, history, environment, and mathematics books.

“Every week we are asked to do projects in our science and social studies classes. We refer to these books then,” says Saras Solanki, age 9.

The Gujarat government has introduced nine new books this academic year for classes 1 to 12. These books, written by Hindu nationalist ideologues, have been delivered to 42,000 elementary schools across the state free of cost.

Eight out of the nine books have been penned by Dina Nath Batra, founder of the Hindu nationalist organisation, Shiksha Bachao Andolan Samiti. Batra was responsible for forcing Pengiun India Publishers to withdraw all copies of Wendy Doniger‘s book The Hindus in February this year.

Enthused by its success, Batra went on to force two other publishers – Aleph and Orient Blackswan – to withdraw books that he deemed “hurtful to Hindu religious sentiments”.

In fact, Modi wrote a foreword in Batra’s books saying his “inspirational literature will inspire students and teachers“

Education in India is the responsibility of both the state governments and the federal government. A state textbook board formulates curriculum based on the guidelines specified by the National Council of Education Research and Training (NCERT). However, these nine books deviate vastly from those guidelines by relying heavily on religious subjects and mythology.

Hence, they have been introduced as “supplementary reading” for the students. These books are stored in the libraries and are made available to students any time they want. Use of these books for extracurricular projects and presentations are encouraged.

“I find that children want to show off their knowledge. More often than not, they are averse to textbooks. Though, they are happy to sit in the library and leaf through other books so their presentation can be better than others in the class,” said Jayashree Ben Solanki, a 6th grade teacher at a municipality school in Ahmedabad, the capital city of Gujarat state. “Therefore, these books end up being read more widely than textbooks.”

“Gujarat is an experimental ground,” said Gaurang Jani, a professor of sociology at Gujarat University. “The BJP and the RSS [Rashtriya Swayamsevak Sangh] will test their methods in the state and if found successful, will replicate it throughout the country,” he told Al Jazeera.

“The move to infuse right-wing ideology in mainstream curriculum has been started by printing books with a religious bias using taxpayers’ money. If the books are received without major opposition in Gujarat, they will introduce such books at the national level as well,” Jani said.

There is already some talk of changing the school and college curriculum at the national level.

In Indian political context, “saffronisation” is used to refer to the policies of right-wing Hindu nationalist organisations, which, according to critics, are divisive. The term refers to the saffron-coloured robes worn by Hindu sages.

Barely four days after India’s new right-wing government was sworn in this May, Human Resource Development Minister Smriti Irani, a former TV actress, issued her first statement saying the Vedas, the Upanishads and other ancient Hindu texts should be introduced in the classrooms.

Consequently, in July, a consultative body called The Bharatiya Shiksha Neeti Ayog (Indian Education Policy Commission) was constituted by the Hindu nationalist organisation, RSS and is mandated “to study the present education system and suggest corrective steps to make it Bharat-centric.” Bharat is the Hindi word for India.

“The problem is that they are equating India to Hindus. What about the India that houses the Muslims, Christians, Jains, Sikhs and other religions? India’s defining character is its diversity – including religious. That will be subtly and efficiently destroyed by introducing religious content in school books,” said Sveta Joshi, a former professor at Delhi University who has done extensive work on the 2002 religious riots in Gujarat.

One of the nine books in question urges students to visit Hindu pilgrim places like Jagannath, Badrinath and Rameshwaram to “cleanse themselves”.

“Students who are slightly older do question the lack of any Muslim or Christian places of worship,” Solanki, the elementary school teacher, said.

“Four of the nine books are titled Prerna Deep, they are meant to have short biographies of ‘inspiring Indians’.” Dalit, Jain, Sikh, and Buddhist heroes are mentioned prominently. The mention of Muslim and Christian heroes is almost negligible though,” said Jani of Gujarat University.

Since 1952, when it founded the first Saraswati Shishu Mandir (nursery school) in Gorakhpur in northern Uttar Pradesh state, the RSS, the ruling party BJP’s mother organisation, has always had schools that propagate its ideology. In subsequent years, the RSS founded Vidya Bharati, an umbrella body for thousands of educational institutions based on Hindu values, from the nursery to the post-graduate levels.

“Until now, the Hindu system of education was running parallel to the regular NCERT curriculum, which was formed collectively by eminent scholars from all walks of life. But now, the danger is that they want to merge the two,” said Jani. “The Sangh ideology is slowly becoming the state ideology,” he adds.

“If children are taught from a young age about Hindu supremacy and glory, they will not question it at a later stage in their life,” said Lila Visariya, a scholar at the Gujarat Institute of Development Research, at a conference organised in Ahmedabad last month.

Achyut Yagnik, founder of the Centre for Social Knowledge and Action, said that the “saffronisation of education” began in Gujarat slowly and subtly since the BJP established power in the late 1990s.

A report by NCERT states: “While communal perspectives have been present in textbooks in earlier periods too, studies done of textbooks rewritten from this perspective, for example in Gujarat, highlight their ready potential to contribute to a culture of divisiveness between religious communities …”

Gujarat was witness to gory religious riots in 2002, which killed about 1,000 people, mostly Muslims. Religious faultlines in the state, however, go back several centuries.

Last year, the Committee for Resisting Saffronisation of Textbooks protested against the textbooks in another Indian state, Karnataka, which, they said, strengthened stereotypes of Muslims and Christians and subdued the voices of women, Dalits and non-Vedic traditions. The textbooks remain unchanged.

“If anyone has problems with any of the books, I urge them to go to court,” said Harshad Patel, the media coordinator for Gujarat BJP. “Let them do what Dinanathji did. Get the court to pass orders to withdraw the books,” he told Al Jazeera.