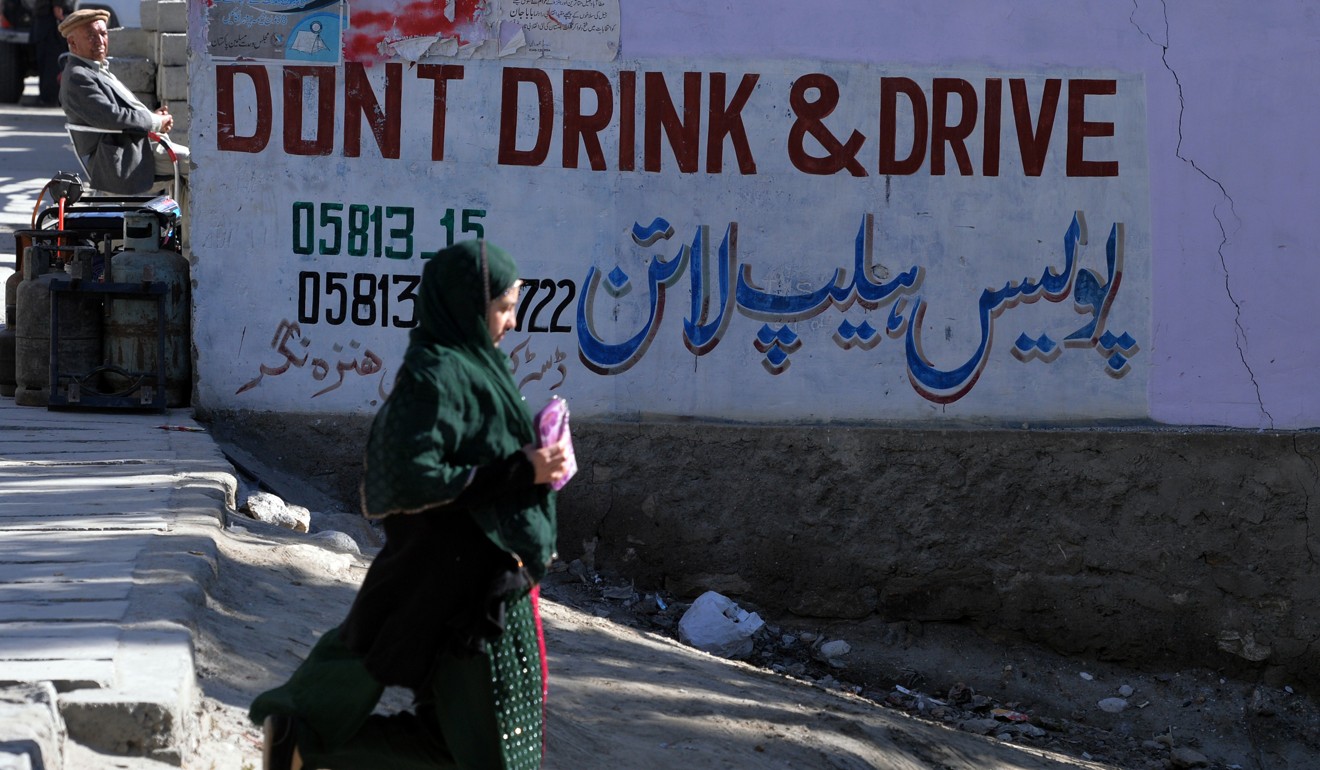 HOW UYGURS AND TIBETANS FOUND UNITY IN KASHMIR

On the banks of the Jhelum River in downtown Srinagar, capital of Indian-administered Kashmir, stands a nondescript two-storey building. Most people are unaware of the glorious and colourful history behind this pale brown, brick structure.

While some people claim the structure, Yarkand Sarai, was built by the Mughals in the 19th century, others believe it was a gift to the local community from the Dogra rulers in the 18th century.

Either way, like most sarai (marketplaces that doubled as resting places for travellers), its walls have heard tales from across Central Asia, told by the tradesmen who came to exchange their stories along with their goods, many of them from Yarkand, the city that gives the structure its name.

In 1949, this particular sarai became home to a bunch of scared and distraught people who had trekked from Kashgar, a Silk Route outpost near what is now the Afghan border, to Ladakh through the ice-capped Karakoram mountain range that divides present day China and India. About 70 families of Uygurs – a Turkic ethnic group based mainly in China’s far west that practises a branch of Islam – had escaped a clampdown by Beijing on their religion in eastern Turkestan – now China’s Xinjiang (新疆) province – and fled to Kashmir, seeking refuge in the sarai. 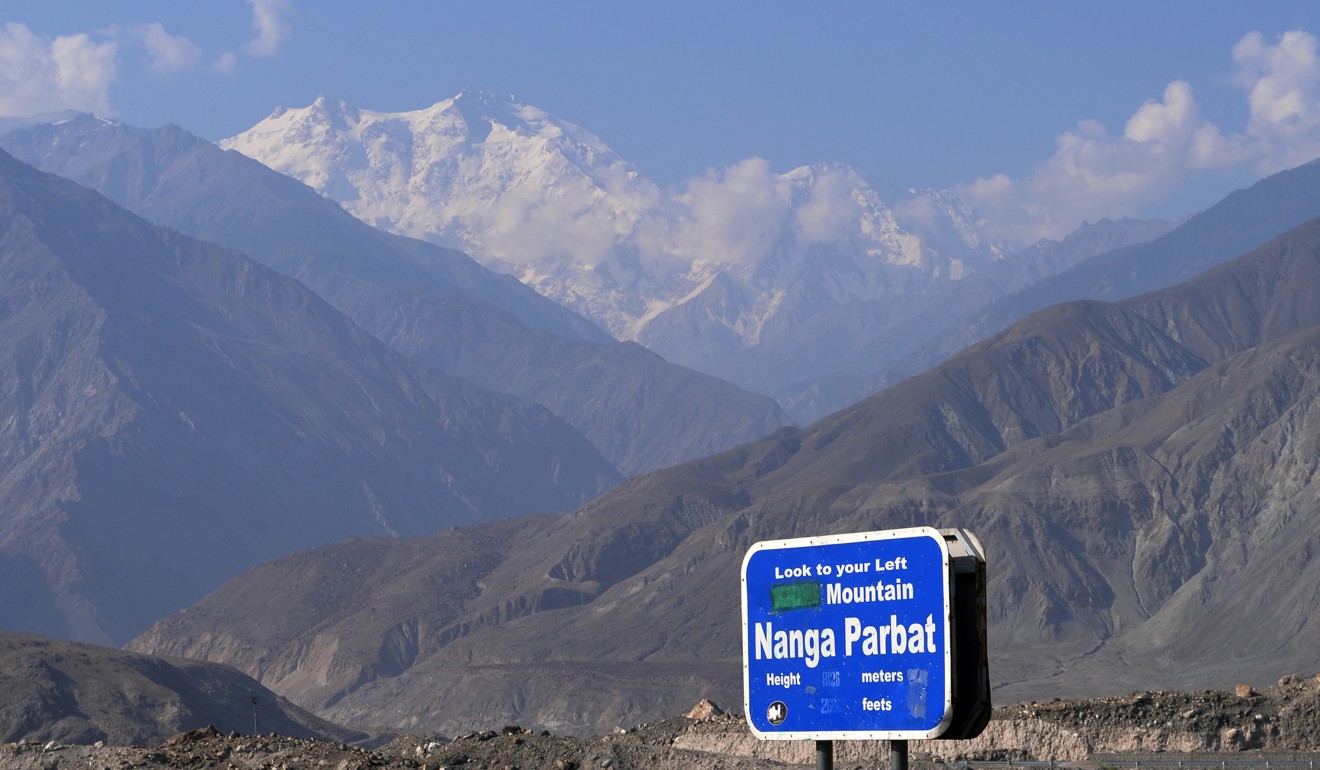 The route was not new to the Uygurs. For centuries before their arrival, silk and horse traders had taken that arduous path to the markets of Central Asia. But this time was different. These families had left their homes forever.

What the Uygurs did not realise when they arrived was that they had traded one crucible of violence for another. The year before their arrival, the newly formed states of India and Pakistan had fought a war over control of the border territory of Kashmir, claimed by Pakistan due to its predominantly Muslim population. 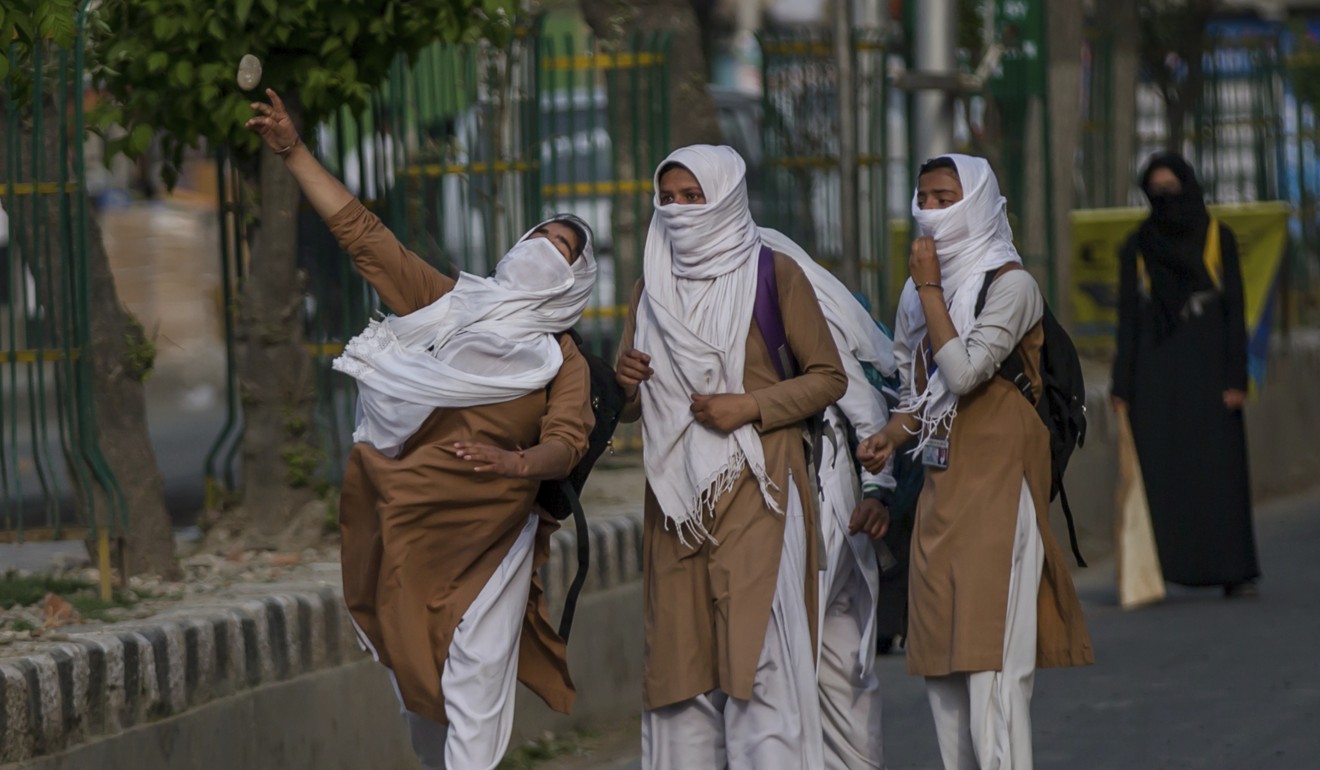 A Kashmiri school girl throws stones at Indian paramilitary soldiers in Srinagar. The situation in Kashmir has remained tense ever since a border war between India and Pakistan in 1948. Photo: AP

The situation in Kashmir has remained tense ever since – much as it has for the Uygur communities the families left behind in China, where separatist movements are blamed for frequent outbursts of violence and Uygurs complain of suppression by Beijing.

Mohammad Haji, 71, was three years old when his family moved, and he grew up listening to his parents’ stories of exile. “I tell those stories to my children so they don’t forget that we are still in exile,” he said.

“We love it here, but our home is East Turkestan.”

His children and grandchildren, who were all born in India and have married Indians, care little for his outbursts. “We are Indian, we don’t feel like we have to go anywhere,” said Ahmed, Haji’s son.

The Haji family is one of the 30 Uygur families still in Kashmir, spread over Ladakh and Srinagar. The community might have been larger, except India asked several to leave soon after their arrival due to Chinese pressure. In addition, many families, under Isa Yusuf Alptekin, a prominent Uygur politician, left India for Turkey in 1954.

The Uygurs who remained have seen the conflict in Kashmir evolve from its inception, though initially they were too busy rebuilding their lives to take part in politics. 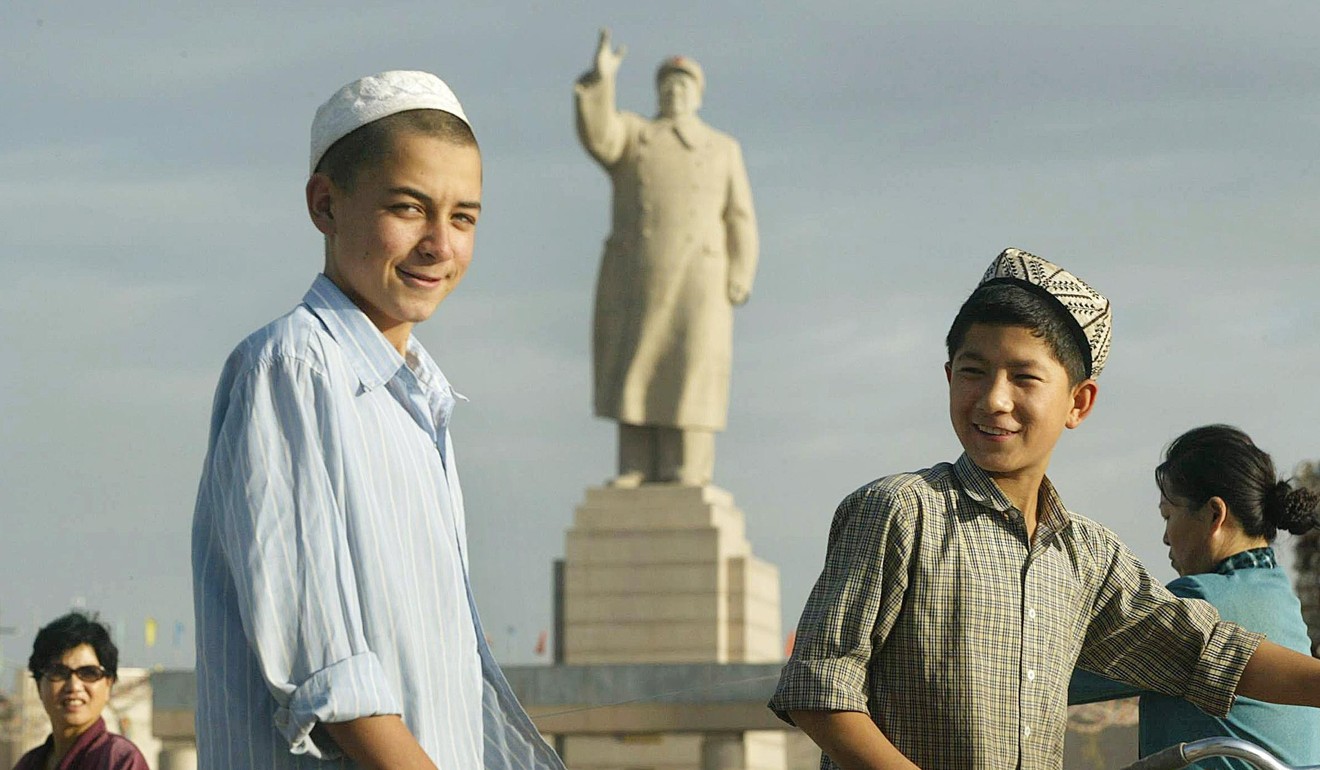 Uygur boys in front of a statue of Mao Zedong in Kashgar. Photo: AFP

Local Uygur families who remain do not identify with either the Kashmiri separatists or the Uygur separatists in Xinjiang. But they observe both issues closely.

“China and India are different. The oppression within Kashmir is not as brutal as it is in East Turkestan. However, Kashmir seems to be headed there,” said a 29-year-old Uygur in Srinagar.

Those who left their homes in Xinjiang in the 1950s feel fortunate to live in Kashmir, where they can practise their religion fearlessly. But the younger generation that was born in Kashmir and is exposed to life in countries like the UAE and Germany, are increasingly disgruntled with the Indians’ behaviour.

Armed militancy broke out in Kashmir in 1989, killing thousands of people, causing the exile of Hindus from the valley and prompting the Indian state to densely militarise it. “In East Turkestan we, the Muslims, were persecuted. But, in the 1990s we saw the Muslim majority persecute the Hindu minority here in Kashmir,” said Haji. Since the early 1990s, Kashmir has remained one of the most militarised zones in the world. 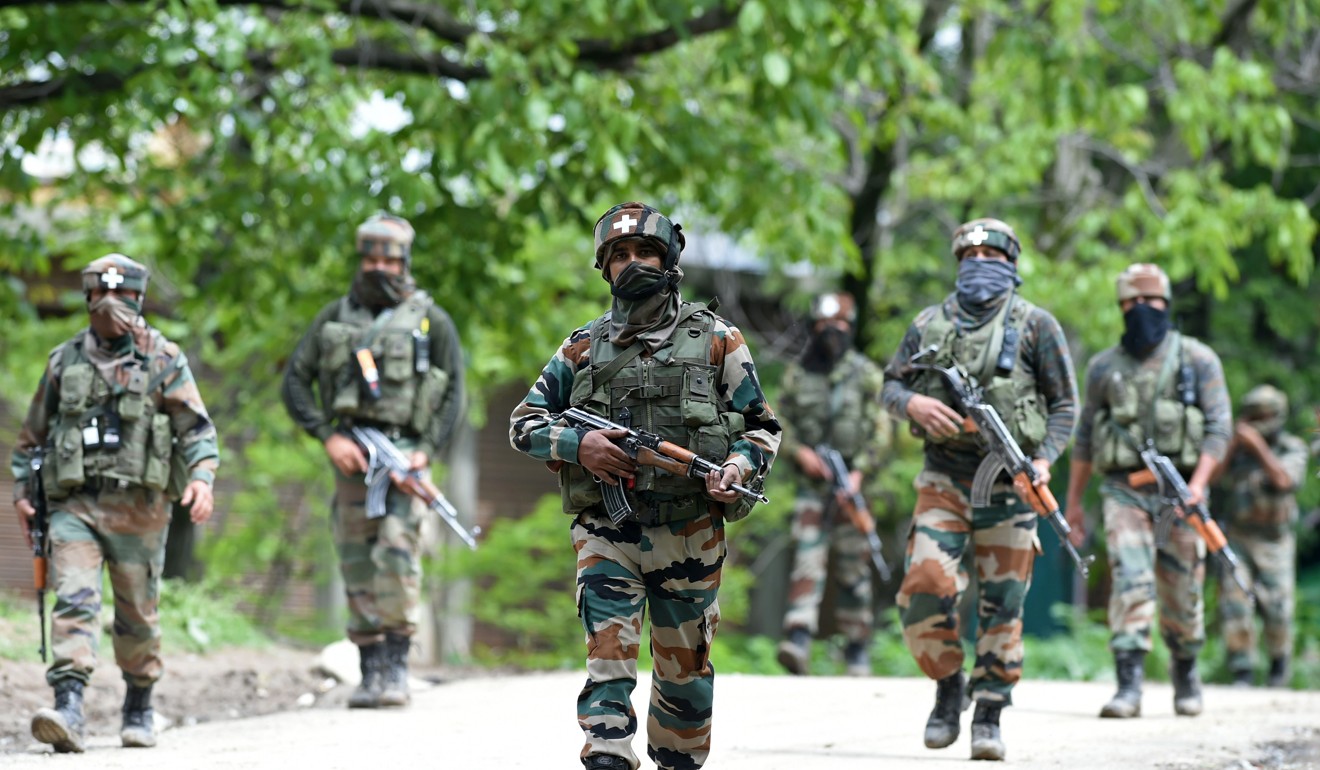 Indian troops patrol near Srinagar. Tensions have been high in Kashmir since India and Pakistan fought a border war in 1948. Photo: AFP

The spread of the internet helped the Uygurs reconnect with some of their families in Xinjiang. Even so, many view the unrest there from a distance.

On April 9, Kashmiri separatist leaders called for a boycott of elections in Srinagar. The Uygur community supported it. “Our fates are now completely entangled with the Kashmiris’ fates,” said Sitara Bi, 81, who moved to Kashmir from Xinjiang in 1956.

Since the Uygurs look different from most Kashmiris, they are often mistaken for another ethnic group that once fled China claiming religious oppression: Tibetans.

“Even though we came to Kashmir almost a decade before them, their history is better known,” said Bi.

Since the Tibetan uprising in 1959, India has offered asylum to thousands of Tibetan refugees, including the Dalai Lama, their Buddhist leader. However, the Tibetans who settled in Kashmir are Tibetan Muslims. 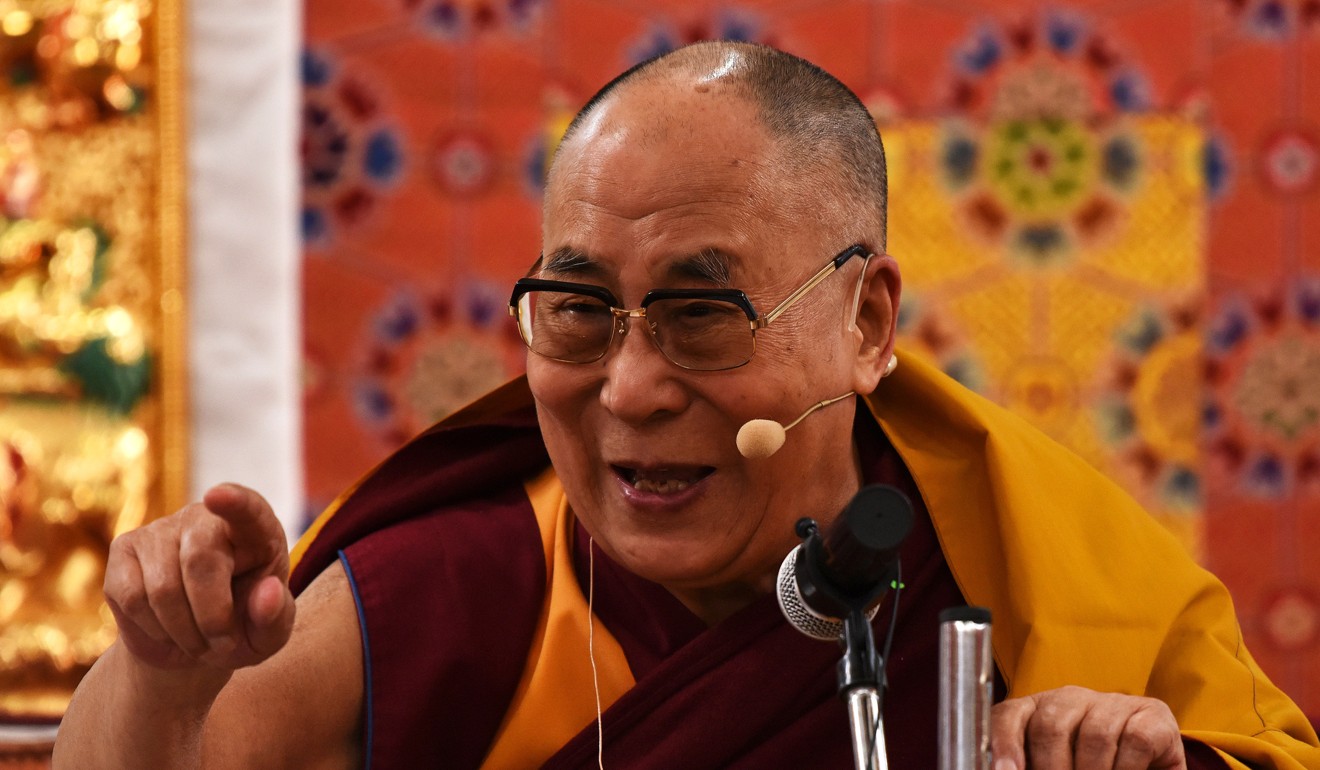 Since the Tibetan uprising in 1959, India has offered asylum to thousands of Tibetan refugees, most significantly the Dalai Lama. Photo: Reuters

Unlike the Uygurs, who are sprinkled across Srinagar and Leh, the capital of Ladakh, the Tibetans live in a cluster in Srinagar known simply as the Tibetan colony.

Umar Adil Kazi remembers the arduous journey across the Himalayas when his family was forced to leave Tibet. Kazi trades in ethnic jewellery and has businesses in Dharamsala in India, Kathmandu and Dubai.

Kazi’s is one of the 350 families in the colony. The Uygurs are too small in number for politicians to court their vote, unlike the Tibetans. The flip side is that the Tibetans are used by the politicians. For instance, many Tibetan men were corralled into SUVs and taken to the polling booths for the election. “We had to forcibly cast our votes,” said Rasool Muhammad, 42.

Currently, the sentiment for secession from India is strong in Kashmir. And most separatist leaders do not believe in the elections India conducts.

While the Tibetans wanted to support the boycott – as the Uygurs had – they didn’t have a choice but to vote. “They threatened to cut the water supply to our colony or to create problems with our documentation like passports,” said Muhammad.

A Muslim woman on the Karakoram Highway, not far from the India-Pakistan border. Photo: AFP

And while the Tibetan Muslims and Uygurs share common stories of fleeing Chinese oppression, their experiences in Kashmir are very different.

The Tibetan Muslims share food, language and ethnicity with 150,000 other Tibetans in Delhi, Dharamsala, Kushalnagar and Darjeeling in India. Everyone in the colony speaks Tibetan. People from across Srinagar flock to the colony to taste the lamb momos and rice noodles that are famous across India.

But the burden of safeguarding Uygur culture, cooking and other traditions rests on just 30-odd families. Only some rise to the challenge. Haji wears the doppa,the Uygur skullcap, while praying and some of the traditional Uygur dishes are cooked regularly.

“We are a Himalayan people and the Uygurs are Central Asian,” said Kazi. “There is nothing in common between us apart from our religion and the fact that China has been brutal with us,” he said. Now, he feels, they are united by the beauty and pain of Kashmir.