In Chhattisgarh, Pressure Mounts on Lawyers Taking Up Cases of Tribal Prisoners

By Raksha KumarOctober 6, 2015 No Comments 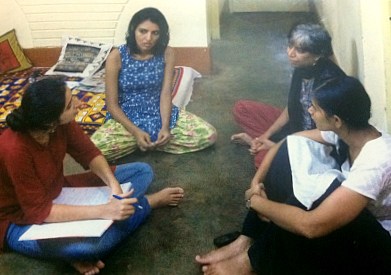 Jagdalpur (Chhattisgarh): Beside a small mosque in the Vrindavan Colony of Jagdalpur, Bastar district, runs an open sewage drain. On the other side of the drain is a nondescript two storied house, the office of the Jagdalpur Legal Aid Group, and home to Shalini Gera and Isha Khandelwal, the two human rights lawyers who run it. Thousands of adivasis in this region of Chhattisgarh rely on them.

As on any other day, Shalini and Isha woke up worrying about their cases, only to find out, however, from the morning newspapers, that their work in the area might come to an end soon.

The Bastar Bar Association has reportedly passed a resolution at their general body meeting prohibiting any lawyer from “outside” from practicing in the Jagdalpur courts. Gera and Khandelwal are registered with the Delhi State Bar Council and are not enrolled in the state. The Bastar Bar Association Resolution is not available and the Bar post bearers have refused to give a copy to JagLAG.

All advocates are registered with a state Bar Council which is a statutory body. Each Bar Council has its own rules regarding practice of advocates in that state. For instance, the Delhi Bar Council does not impose any restriction whatsoever on advocates from outside. The Chhattisgarh Bar Council allows outside lawyers to practise so long as their vakalatnamas and other documents are countersigned by a local lawyer.

The Bar Association, however, is not a statutory body. “If indeed such a Resolution has been passed even orally it would be absolutely illegal, akin to a fatwa/ khap diktat,” said Sudha Bharadwaj, a human rights lawyer practising in the Bilaspur High Court.

For a few months now, the Jagdalpur Legal Aid Group have been issued oral notices and complaints from the Bar asking them to submit complete documents required to practice.

“One day, in the course of a bail hearing, the presiding judge informed us that the Bar President had complained against us, and therefore he (the judge) would not hear our argument,” said Gera. “They made claims that we were not entitled to practice there, which is quite untrue – section 30 of the Advocates Act gives us the right to practice anywhere in India,” she added.

An anonymous police complaint was filed against JagLAG, which alleged that its lawyers did not have the right credentials to practice in Bastar. The complaint was signed by someone who called himself ‘Aam Nagarik,’ or common citizen.

The police, of course, were only too eager to act, since many JagLAG cases involve allegations of human rights violations. The police made inquiries in courts and with lawyers about the credentials of the JagLAG team to practice law in the region.

“These present actions not only violate the rights of advocates to practise freely anywhere in the country and the rights of local advocates to choose their associates, but most importantly it attacks the constitutional rights of voiceless adivasis facing false cases, illegal detention and torture. They have the right to be defended when accused and to have legal representation of their choice,” said Bharadwaj.

The group works largely in five districts – Bastar, Dantewada, Kanker, Sukma, and Bijapur. When JagLAG began work in the area a couple of years back, they started by speaking to local lawyers to get data on the legal cases. But there was very little to be found. They filed RTI applications to procure information about specific cases. They also released shocking figures relating to teeming jails in the Bastar region and the high rates of acquittals of those under trial – essentially, bringing to attention the fact that most arrests are unfounded and that the courts are compelled to let the tribals free, but only after they have spent several years in jail.

“I used to look forward to the times when Isha didi used to visit me in jail,” said Kawasi Hidme, 24, who was acquitted this June, due to efforts by JagLAG, after spending seven years in jail where she was raped and tortured. “Those were the only moments of hope for me,” she added.

The members of the Bar Association of Bastar were unavailable for comment.

In May this year, the Chhattisgarh government signed agreements with mining companies to start new mines in the state. “Because of those agreements, the violence against the local population has increased. They just want us out of here so they can extract minerals effortlessly,” said Lingaram Kodopi, a local journalist in Dantewada. “And anyone who is helping us is not helping the authorities,” he added.

Harassment of human rights lawyers is not new to the state. Advocate Amarnath Pandey of Sarguja, who had taken up the case of sexual violence by the police against an adivasi woman, faced vandalisation of his car and a false FIR which was only recently quashed by the High Court in Bilaspur. Advocate Girju Ram Kashyap was detained by the police when he was helping villagers of Lohandiguda to prepare affidavits regarding alleged illegalities by the TATAs. Advocate Satyendra Sahu of Pratappur was arrested for defending Naxal prisoners but had to be released on statutory bail when the police failed to file a chargesheet.

Recently, JagLAG’s work had increased manifold with many cases of false arrests, encounters and other police brutality being reported to them. “We are relieved on the day we get just one or two SOS calls,” smiled Khandelwal, sitting on the floor at her Jagdalpur office-residence. Bastar is now the most militarised zone in India.

Undeterred by the mounting pressure, JagLAG is considering challenging the Bar Association resolution.

Published in: The Wire
Published on: 6 October, 2015
Link: https://thewire.in/12482/in-chhattisgarh-pressure-mounts-on-lawyers-taking-up-cases-of-tribal-prisoners/