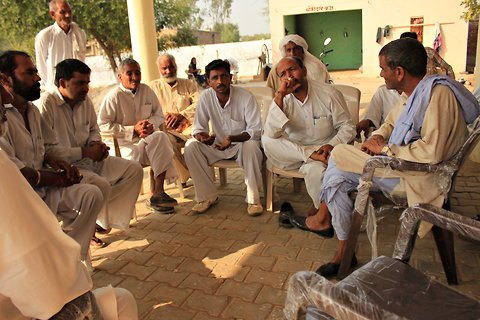 In Rural Haryana, Women Blamed for Rape Where Men Make the Rules 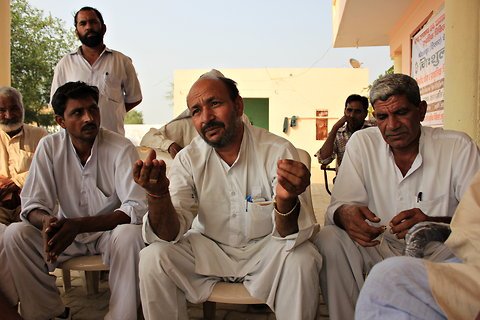 Disputes in this small Haryana farming village, 70 miles from Delhi, are settled by 11 men dressed entirely in white, who hear arguments in a roomy hall and then retire to an underground room to make a decision.

The group, the Sarva Jaateeya Venain Khap, is one of the largest khap panchayats, or unelected all-male village councils in Haryana, with a jurisdiction that extends to 52 villages. The system garnered national attention recently, after a series of rapes in the area were followed by a suggestion from a khap member that the marriage age be lowered to 16, thereby keeping women sexually satisfied, to prevent further rapes. The suggestion comes on the heels of several “honor killings” in the area, in which families killed couples who had married against their wishes.

During an interview Thursday, a khap member, Balwan Singh Nain, a 48-year-old farmer, explained the khap’s view this way: “Women maintain a family’s honor. Not men. If she cannot keep her honor, it is solely her fault.”

This week in a nearby village under the khap’s jurisdiction, a teenage lower-caste girl was raped by several teenager boys who dragged her into a house, one of more than a dozen rapes this month in the area. On Wednesday, she committed suicide by setting herself on fire.

Khap members said in interviews Thursday that if the girl’s family comes to them, they will ensure that the “right” culprits get punished. But, they said, they do not take up cases on their own.

Women are protected, they said. “If someone forces himself on her, the village will not let him lead his life peacefully,” said Mr. Nain. “We will all ensure he is punished.”

While khaps are technically illegal, and have recently been condemned by India’s Supreme Court, their word is still de facto law in parts of Haryana and nearby states. Historically, the khaps were started by Jats, a caste of peasants who became land-owning farmers and are now a powerful voting bloc in these areas, to consolidate their power and position. Khap panchayats generally govern a cluster of villages whose dominant population is from a single gotra, or clan, but make decisions for all castes.

Khaps have existed for several hundred years in the north Indian states of Haryana, Rajasthan and Uttar Pradesh, but are now in danger of extinction, their members say. “What existed through centuries of Mughal and British rule is being systematically demonized by the Indian government in 60 years,” said Raghuvir Singh Nain, 45, a member of the Sarva Jaateeya Venain Khap.

“Not once has the decision of the khap been overridden in this village,” Mr. Nain said. “If anyone wants to challenge a decision they are free to go to the courts in this country,” he said. India’s judicial system is notoriously slow, and prone to corruption, so for many, the khap system is the only solution.

Sabitri Nain, 62, is a resident of Danoda Kalan and follows the purdah system, which requires women to cover their face in front of men. She said that since the time of her grandmother, no khap has made a wrong decision. While she votes in elections for legal village leaders, she said she looks up to the khaps for all the decision making in the village.

Ranbir Singh, 32, another village resident, said he would never approach the legally elected sarpanch, or mayor, of the village, with a dispute. “They are politicians; they exploit us,” he said. “The khaps are our elders; they would never discriminate among us.”

Although the local khap is made up mostly of Jats, members say they are open to others. “This doesn’t mean we discriminate against other castes or clans,” said Balwan Singh Nain, another member. “Our panchayat members include a Brahmin and a Shudra also,” referring to both the highest and lowest castes.

Because khaps are social organizations formed on the basis of trust and social standing, there are no records of the exact number of in India. At the annual Sarv Khap, or All Khap, meeting, the number of khaps varies every year, attendees say. “There are new khaps formed every now and then, if there is a person of great social standing in a particular village, and some weak ones tend to die out,” said Subhash Nain, a senior member of the Sarva Jaateeya Venain Khap.

Members are nominated through consensus, and usually a man of high social standing is put forth. “We see if he has made sacrifices for the society and if he is morally upright,” said Satyavan Nain, a junior member of the khap. The leader of the khap, called the pradhan, retains the post until his death.

Despite their views on women and honor, the members of the Sarva Jaateeya Venain Khap are by no means elderly. Several are in their 30s and 40s, and some even send their children to prestigious schools in Delhi.

If a rape is reported to the khap and a man found guilty, the punishment is even stricter than the law, members say. “We in the khaps punish the culprits of rape by taking away their property and banishing them from the village,” said Raghuvir Singh Nain. “Your courts tend to imprison them for not more than seven years, and that too, after decades-long court battles.”

The groups have been condemned in Delhi and elsewhere for encouraging honor killings, a charge that Raghuvir Singh Nain denied. “Do you think we can order honor killings?” he asked, with a smile. “Why would we want bloodshed in our villages?”

A khap, he explained, works on the principle of social pressure. If a man’s “honor” is violated because his daughter or sister or wife “overstepped their social boundaries,” Mr. Nain said, then he cannot live in the village with his head held high. In order to save himself from that persecution, he might decide to kill his daughter or sister, he admitted.

Overstepping the social boundaries in this part of the country is not difficult, because residents of these villagers do not approve of marriages within their clans. “I cannot get my daughter married off to anyone with my gotra or my wife’s gotra or my mother’s gotra or my grandmother’s gotra,” Raghuvir Singh Nain said.

So, who is left? “Many,” he said. “My father found my wife for me when I was 8, and she was from a neighboring khap.”

Another way to overstep social boundaries in the area is by marrying for love. “There is a fundamental difference between village life and city life,” said Subedar Surajvan Sharma, 71-year-old member of the khap. “We, here, have only arranged marriages.”

Khap members on Thursday reiterated that the right answer to the 13 rapes that were reported across three districts of Haryana in the past 30 days was to get girls married off at a young age. “They say empty mind is a devil’s workshop, so if girls quit studying at the age of 15, how will they keep themselves engaged?” asked Balwan Singh.

The khap doesn’t insist on early marriage, he said. “We said either educate them or get them married off. Many people here are not economically strong enough to educate their girls, so for their safety, they should marry them off,” he said.