By Raksha KumarNovember 21, 2015 No Comments 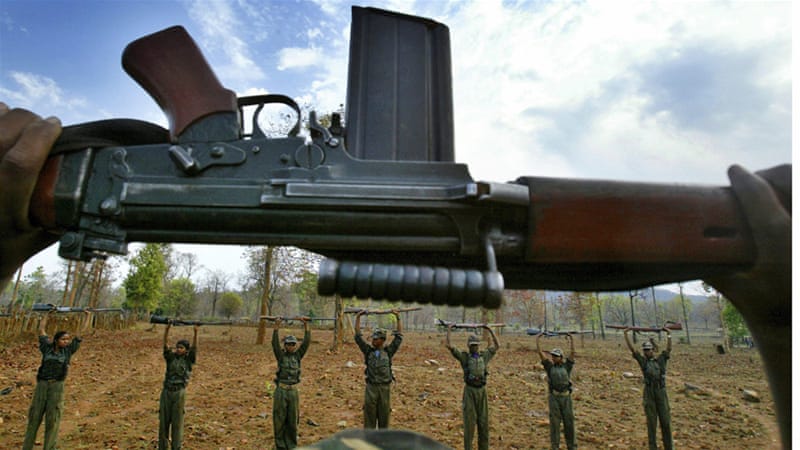 Bijapur, India – The violence that took place in this village nearly a decade ago is still visible. Charred logs are all that remain of a razed home, and barren land has replaced a once-thriving forest.

Residents of Bijapur district, in the central Indian state of Chhattisgarh, fear the prospect of more fighting as a once-banned militia, Salwa Judum, has been reincarnated to fight communist groups opposed to resource extraction in the area.

Chhattisgarh has witnessed armed conflict for several decades now, partly over the region‘s rich deposits of coal, iron ore, and bauxite. The Indian government, which uses these minerals for electricity generation and steel and cement production, has fought Maoist groups known as Naxalites.

They oppose large-scale mining, arguing it disrupts the socioeconomic fabric of the forest-dwelling tribal people and harms the environment. The Naxalites began their armed campaign in the 1970s because of what they say is an unequal distribution of wealth.

In 2005, however, after nearly three decades of fighting the Naxalites, the Indian government began arming a civilian group to fight its battles. This militia, Salwa Judum, had a better understanding of the terrain and the local language – and was more ruthless than Indian security forces. Many villagers were forced to join the militia.

“The state was making us fight its battles,” said Rosan Nikam, a Bijapur resident for the past three decades, speaking of how civilians were armed. “That had never happened before. The security forces fought the Maoists, not common villagers.”

Many Salwa Judum members were civilians who received arms training from the state government. The young tribal members who were trained by the government came to be known as Special Police Officers (SPOs) and Koya Commandos.

“It was clearly a state-sponsored counterinsurgency programme,” said Nandini Sundar, an academic who petitioned India‘s Supreme Court against Salwa Judum in 2007, a case that led

About 670 villages in the Bastar region were affected by the ensuing violence, and although the residents have by now rebuilt their homes, many of them remain destitute.

The Supreme Court of India banned Salwa Judum in 2011, in light of the human rights violations it found it had committed.

But in May this year, shortly after the Chhattisgarh government signed agreements to build massive steel plants in the Bastar region, a group called Vikas Sangharsh Samiti was launched by Chhavindra Karma, with the aim of continuing Salwa Judum’s struggle.

Salwa Judum had been led by Karma’s father, the late Mahendra Karma, a Congress party leader assassinated by Naxalites along with 12 others as their convoy traveled through a forest in May 2013.

Chhavindra Karma claims that the Naxalites have killed 93 members of his extended family.

“Salwa Judum started with peace marches in villages. The objective of these marches was to make the people aware of Maoist excesses,” said Karma. “It is the state that began to train tribals with guns.”

The militia’s critics say it is impossible to think of Salwa Judum as separate from the state. The SPOs and Koya Commandos drew their salaries from the state, earning as much as 9,000 rupees ($138) per month.

The Supreme Court ruling banning Salwa Judum forbids the creation of similar groups, but Vikas Sangharsh Samiti hopes to get around this by using a different name and a different structure.

Authorities in the Home Ministry in Delhi and the state government in Chhattisgarh did not respond to Al Jazeera‘s repeated requests for comment.

Chaitram Attami was a central figure in Salwa Judum, and used to call the shots in the mineral-rich Dantewads region.

He is now a local politician and travels with four rifle-wielding bodyguards. Attami lives in the Kaasoli camp, which is covered with barbed wire on all sides and has armed paramilitary men manning the entry and exit points.

Given the public outcry against Salwa Judum’s new incarnation, Attami is taking a cautious approach.

“We will try and make it peaceful,” he said. He admitted that Vikas Sangharsh Samiti has begun to go into the villages to warn their residents against supporting the Maoist agenda – which is exactly how Salwa Judum began its activities.

Meanwhile, villagers who are not affiliated with Salwa Judum or the Naxalites say they have borne the brunt of the violence. Many people in the south Bastar region give dreadful accounts of how their lives were turned upside down during the Salwa Judum era.

“We haven’t completely recovered from the violence unleashed on our villages a few years ago, and there is already talk of more violence coming our way,” said a 26-year-old man, who spoke on the condition of anonymity, fearing reprisals from either government security forces or the Naxalites.

Nikam, the Bijapur resident, said: “My house was burned twice in 2007. Everything I had, including my land documents, grains, bedding and clothes, were burned down.”

Today, he cultivates what he believes to be his land. He is not sure because he no longer has his documents. If the authorities decide to evict him from his land, he will have no proof to fight his case.

He said he does not dare to take on the security forces for fear of false arrests, torture and extrajudicial killings.

And the Naxalites have been known to turn violent when villagers do not support them with information, food, water, and shelter when asked to do so.

“I think we live between a rock and a hard place,” Nikam told Al Jazeera. “Sometimes, one is softer than the other; but mostly, we are crushed.”