“It is not hidden, but it is so seamless that it goes unnoticed. That reflects how the Parsi community has quietly sunken into the societal fabric of India over the past 1,500 years,” said the 74-year-old Cyrus Dajee, talking about the Parsi Colony — a bunch of buildings owned by the Parsis in Dadar, Mumbai.

Unlike the other Parsi Colonies in this coastal city, it is not bound by a wall or fence that would isolate it from its surroundings.

The corners of his starched white kurta flapped in the moist evening breeze, a black oval cap sat comfortably on his head. He spoke with ease and confidence, even though age had made his voice slightly shaky. Wielding his walking stick was his favourite distraction, I noticed.

It was 2013 and I was strolling in a garden in the Dadar Parsi Colony, when Dajee approached me and struck up a conversation. We just sat on a nondescript bench in the middle of the worn-down park. When asked for details about his religious community, he said, “I am a nobody; there are those who run the religious bodies, ask them.”

But, in time, he went on to tell me all about it anyway.

“Well, you certainly haven’t spent enough time in a Parsi household, then!” he smiled. “All we talk about over dinner is the decadence in the present generation.”

When I said turbulence, I didn’t mean that the young were at fault, I pointed out. But, Dajee didn’t seem to concur. “When we were young, Zoroastrianism meant something to us — a religion, a way of life,” he began his long monologue. “Today, the religion and its practices are lost,” he shook his head disapprovingly.

According to several accounts, the Parsis first came to the subcontinent from Persia in the eighth or 10th century, in order to avoid persecution by the Arabs who were conquering that country.

The Parsis follow Zorastrianism, a religion based on the teachings of Zoroaster. According to the 2001 census, there were a little less than 70,000 Parsis in the India. More than half of them, about 45,000, live in Mumbai. And about one third of those live in the upmarket Dadar Parsi Colony.

Even though Dajee began his monologue with the rehearsed contempt for the younger generation of the faith, his views on the problems Parsis face, gradually became more nuanced.

Any community that imposes rigid rules on its people relentlessly is walking straight into its end days, he said. “Remember,” he continued, “the Zoroastrians came from the Iran of yesteryear where the pressure to convert to Islam was really intense. Therefore, the Parsis began to marry within the community. I think when they arrived on the shores of India, they were scared of the caste system in this country. They feared the upper castes would not let them be one of them, and they didn’t want to be relegated to the lower castes. So, they were left with no option but to continue their tradition of endogamy.”

I nodded at his complex historic reasoning. “But, why should the young girls of today be forced to marry within the dwindling community?” he asked rhetorically. When a woman marries outside the community, her children are not considered Parsi. 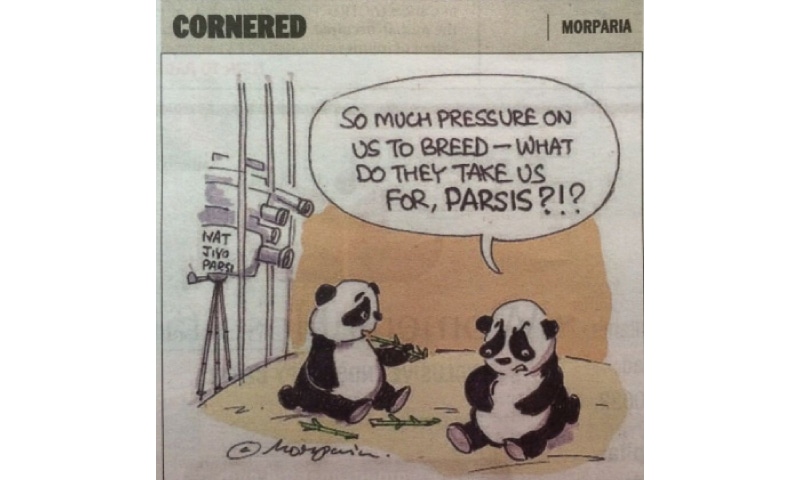 Advertisements run by Parsi organisations such as the one on the left returns to the original legend of the raja of Sanjan and Parsi elders to encourage procreation. Cartoonist Hemant Morparia takes a dig at the campaign through a drawing published in the Mumbai Mirror on November 14, 2014 (above)

Dajee’s granddaughter is 28 and works as a business analyst at a technology firm. While Dajee would love to see her married off to a Parsi following all the religious ceremonies, the way he and his wife of 50 years did, he understands that there might not be a suitable match for his outgoing, intelligent granddaughter within his small community.

“After all,” he waved his hand at no particular thing, “religion is only one of the identities of a person, isn’t it? My granddaughter is a professional, she is a confident global citizen who also happens to be a Parsi,” he said.

Such lucidity of thought is absolutely uncommon even in majority communities in the country. Whatever happened to the young generation bashing he began with, I asked teasingly. “Well, we are unhappy at the way things are, but I love my granddaughter too much to let my obsessions with religion affect her,” he said

Newspapers have reported that women in the Parsi community have been under pressure to bear more children so as to increase their numbers. Some Parsi organisations have also announced SOPs (standard operating procedures) such as subsidising visits to fertility doctors and providing for larger homes to accommodate bigger families.

But the community is one of the richest and highly educated in India. Therefore, women in the community tend to marry while in their early or mid-thirties, after the passing of some crucial fertile years. Also, most Parsi women are professionals, making it very tough for them to have many children.

Dajee has four sons. His wife used to teach at a local school in Dadar before she retired. “It was easier back then,” he said. “Neither of us worked too much,” he laughs. He was an employee at the state excise department and retired 14 years ago.

Since then, he walks around in the tiny park at dusk every day. I found my daughter-in-law in this park, he proclaims happily. Dajee was walking one evening when he bumped into his old-time friend who had come down from Gujarat. A few months later, Dajee’s oldest son married his friend’s daughter.

It is only Dajee’s oldest son who has married a Parsi woman. The others have married out of the community. But, Dajee insists that it is not why his oldest daughter-in-law has been his favourite. “She is simply a nice woman, the daughter I never had.” he said.