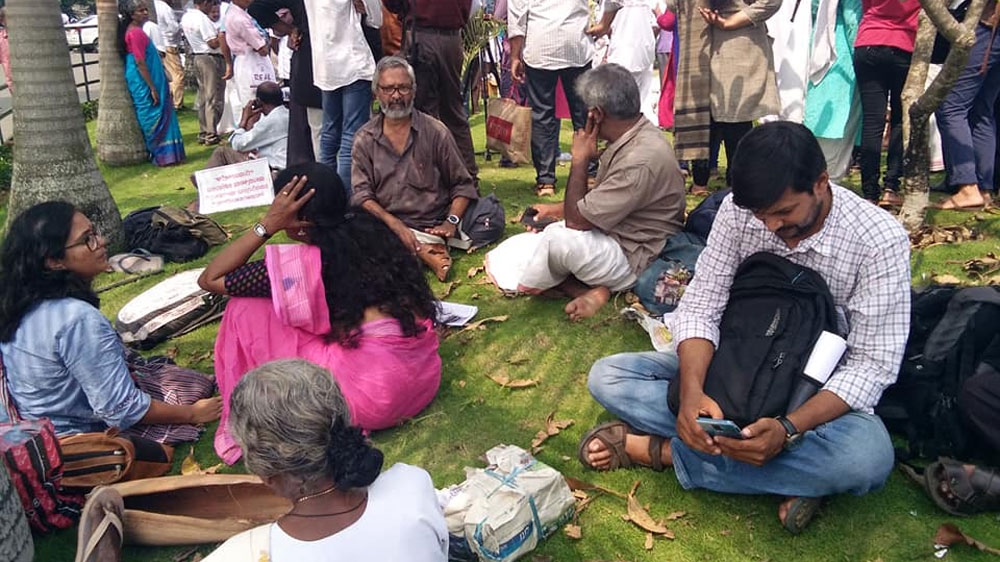 Protest against sexual abuse in Catholic church grows in India

By Raksha KumarNovember 20, 2018 No Comments

Nuns are joined by crowds in Kerala to demand justice for those who allege sexual abuse by powerful church figures.

Kerala, India – The Catholic Church in India is facing a trying time, with a growing protest movement in response to allegations of sexual assault by clergymen.

In June, police in the southern Indian state of Kerala registered a case against the bishop of Roman Catholic Diocese of Jalandhar, in the northern state of Punjab.

A nun had alleged that the bishop, Franko Mulakkal, had raped her repeatedly between 2014 and 2016 at a convent in Kerala.

The nun is a member of the Missionaries of Jesus congregation based in Jalandhar.

The bishop was arrested but then released from prison on October 15 on bail on the condition that he presents himself in the police station once every fortnight.

Five nuns of the same congregation have come out in support of the complainant. Six of them live in a convent in Kerala, under police protection.

A few weeks before the case involving Mulakkal, in a separate incident, Kerala’s Malankara Orthodox Syrian Church set up a panel of lawyers and priests to investigate allegations of sexual abuse by a woman from Thiruvalla, a town in Kerala.

She accused five priests of using her confession to blackmail and sexually abuse her for several years.

“We intend to clean up the system and also seek justice to the nuns who have been wronged,” said Father Augustine Vattoly of Eranakulam, Kerala.

He now leads a newly formed umbrella organisation, Save Our Sisters (SOS), which was set up to fight for nuns who speak out, and is one of few church officials to back survivors.

On November 14, about 250 churchgoers, women’s rights activists and concerned citizens marched to the Kerala Government Secretariat in Thiruvananthapuram, the state capital.

In front of the North Gate of the building, they called for action to be taken against powerful clergymen.

Fighting back tears, the nun in the case against Mulakkal said: “Perhaps God chose me as a tool in this fight against injustice.”

M.Sylvester, a Kochi resident, said: “All my life I have believed in the sanctity of the Church. I want that sanctity to be restored.”

Officially, all arms of the Church have come out in support of the accused priests.

The October issue of Christward, a monthly magazine published by the Diocese of Jalandhar, of which Franco Mullakal was the bishop until recently, blamed “pressure from the media and the scenario created by some sisters and their supporters” for Mulakkal’s arrest in Kerala.

Father Kuriakose, a priest with same Jalandhar diocese, was a witness in the rape case against the bishop. He was found dead in his room in October; no investigation was ordered into his death and the priest’s family suspects foul play.

Initially, the complaint against the bishop was viewed with suspicion.

“Many within the Catholic Church saw the nun’s complaint as malicious,” said Anita Cheria, a journalist and activist based in Bangalore.

PC George, a member of the Kerala state legislative assembly who is also a Catholic, called the nun a prostitute.

In a September press conference in Trivandrum, he said “the victim nun is not eligible to be a nun, she has ceased to be a virgin the day she was abused the first time”, but failed to question the celibacy of the accused bishop.

However, as public pressure increased, church officials have made fewer statements.

The fallout has highlighted a lack of infrastructure to deal with allegations of sexual harassment within the church.

While India has the Sexual Harassment of Women at Workplace (Prevention, Prohibition and Redressal) Act of 2013, churches and other religious institutions are not covered by it.

“Even if we assume that there was an internal committee set up, the Church is so prudish about sex that I am not sure how such complaints would be addressed within the setup,” said Rima Thomas, a resident of Ernakulam.

In October, Cheria, the journalist, wrote: “Despite the passage of the ‘CBCI Guidelines to Deal with Sexual Harassment at Work Place’ by the Catholic Bishop’s Conference of India’s standing committee in September 2016, these guidelines provided no support to the survivor nun.” CBCI refers to the Conference of Catholic Bishops of India.

The Church has not formally acknowledged the nun’s complaint.

She has said that she was she forced to approach police after attempting – and failing – to communicate with church officials.

Between September 8 and 21, five nuns staged a sit-in protest in Kochi in support of the alleged victim.

“She has been a kind soul who has helped us for nearly a decade, how can we not support her now?” said Sister Anupama, a nun.

Anupama has written to the Vatican several times demanding attention but says she has not received any letters in response.

Despite the lack of action, the survivor nun, however, has not lost hope. “I trust that God will grant me justice,” she said.