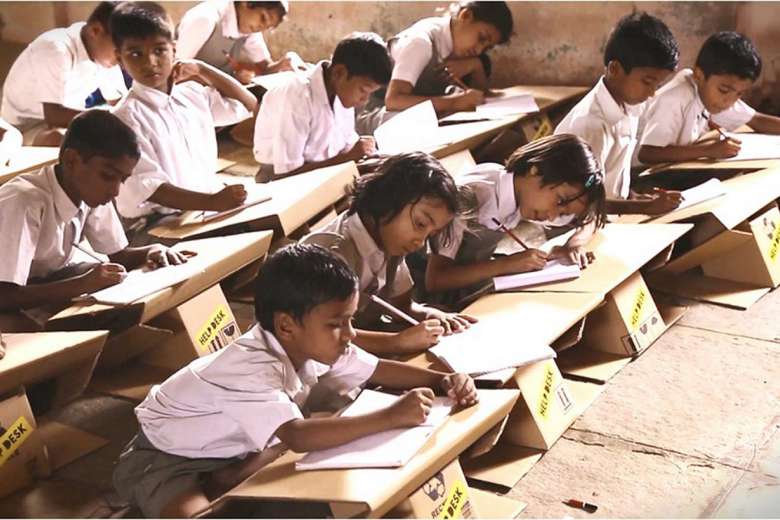 By Raksha KumarSeptember 20, 2014 No Comments

By recycling cardboard boxes into combination backpack-school desks, an Indian NGO has given children a way to study in comfort – and a reason to stay in school 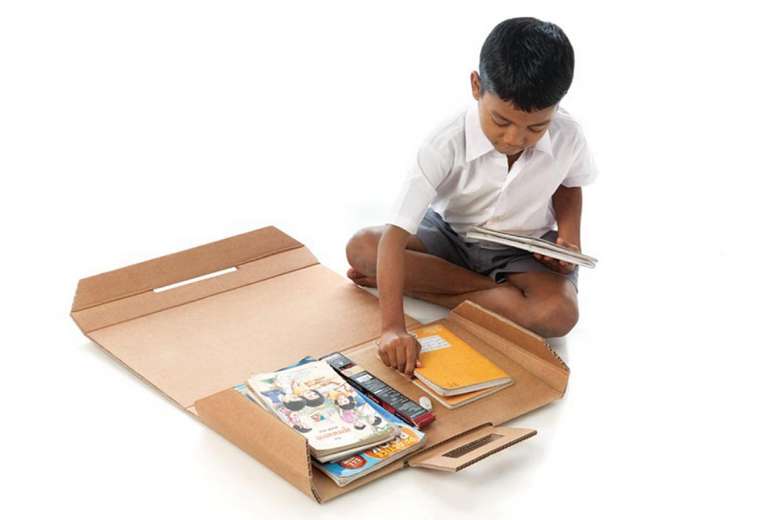 Ganesh Sanas used to walk 3km every morning to school in the heat of Wai district, in the western Indian state of Maharashtra, with his books in his tiny hands. But last year, something changed that brought a smile to the seven-year-old’s face.

He and his classmates were each handed a strange-looking cardboard box. It had enough space for their books and lunch bags. When emptied, it could be miraculously transformed into a desk.

The desk allows children to sit comfortably cross-legged on the floor and to work upright.

For a child who owned neither a backpack nor a desk, this hybrid object was a new and compelling reason to go to school.

Education in India is as varied as its diverse population.

While international schools in cities have facilities that surpass those of classrooms in some Western countries, rural schools often lack walls and clean toilets.

So a huge chunk of the country’s population – those who cannot afford expensive private education – go to school in their early years and then drop out, looking for jobs instead.

In 2009, India’s federal government passed the Right to Education Act that promised free and compulsory education to all children. The equivalent of roughly US$500 billion (S$634 billion) was allocated to it.

However, programmes under this Act do not ensure the availability of desks, bags or even toilets.

Children often sit on the floor with their backs hunched for about five hours every day, affecting their eyesight and posture.

This is one of several reasons that many drop out of school.

According to the government and NGOs, dropout rates in elementary schools in rural India stand at about 40 per cent.

An inexpensive solution to the problem came from a volunteer at a non-profit organisation called Aarambh, based in Navi Mumbai.

It collected used cardboard refrigerator boxes and spare car parts from recyclers, created a stencil design and made cardboard cutouts, then folded these to form simple school desks they dubbed “help desks”.

It also designed a machine to facilitate the cutting and folding process which cost only about US$100, bringing the price of each help desk to a mere 20 US cents.

Thanks to the desks’ affordability, Aarambh was able to distribute them to 2,000 students in rural parts of Western Maharashtra last year.

“When other schoolchildren began asking for the desks we realised that we had achieved a small victory,” said Ms Shobha Murthy, the founder trustee of Aarambh.

Aarambh is now working to expand the project and improve the product, making it with a different material that will withstand the trek to school in the rain.

As for the children, the help desk has given them a reason to stay in class all year.

Published in: The Strait Times
Published on: September 20, 2014
Link: http://www.straitstimes.com/world/the-foldable-deskbag