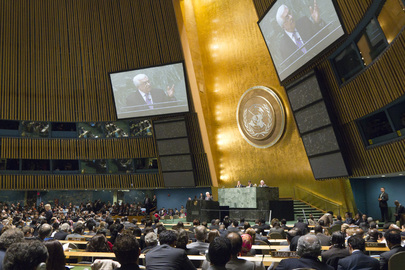 UN Vote: Will it matter to Palestinians?

By Raksha KumarNovember 30, 2012 No Comments

Palestine’s elevation to a non-member observer ‘state’ of the United Nations is an exciting development. However, at the other side of these celebrations, there needs to be an objective stocktaking of the challenges ahead in the Israel-Palestine logjam.

Since the main takeaway for the Palestinians is to make use of their new status to try to join the International Criminal Court, the question is, how well is the US prepared to accept this fact and what concessions it is willing to give?

Earlier in 2011, the US Congress cut off financing to UNESCO after it accepted Palestine as a member. Therefore, if Palestinians use this as an opportunity to seek membership in other UN organisations, funding to those agencies might be under danger.

This is the biggest defeat in the recent times for both the US and Israel, isolating and defeating them by the vote in the General Assembly – 138 countries in favor of the Palestinians, 9 opposed and 41 abstaining.

Apart from the challenges internationally, there are certain internal challenges to the peace in the Holy Land – the borders between Israel and Palestine being the major issue, especially, given Hamas’ unwavering stand on the issue. Several Palestinian refugees were forced out of the newly formed Israel in 1948, their future needs to be bargained. The increasing number of Jewish settlers in the occupied territories would surely be a dispute that needs immense work on. And, the most obstinate of all issues is the fate of Jerusalem. What will the future of the city be? How will East Jerusalem be divided?

At some level, I am sure, everyone realises that this significant step could mean very little if the larger challenges went unmet.

I remember my trip to the ghostly city of Hebron in the West Bank. Walking in the Israeli-controlled areas of Hebron, one could smell fear, devastation and a dark history. It is the lives of these ordinary citizens that should change in order for Thursday’s vote to matter.