What’s all the fuss about?

By Raksha KumarFebruary 14, 2015 No Comments

Can the removal of the words ‘secular’ and ‘socialist’ from the Preamble distort the Constitution? What do these words mean to young India? We bring you reactions from across the nation. 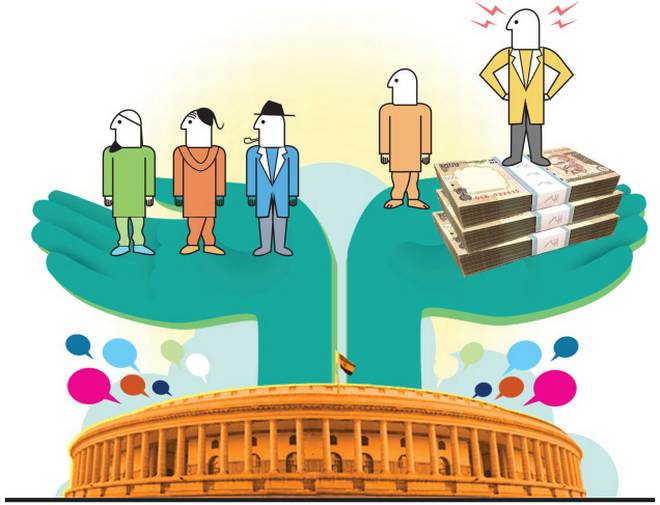 Vrinda Bedi, 26, doesn’t have the time to read newspapers as she rushes to work every morning. On January 26, she did not notice the advertisement issued by the Ministry of Information and Broadcasting that showed the Preamble of the Constitution without the words ‘socialist’ and ‘secular’. “It really doesn’t matter to me,” she says. “How does it matter what is written and what is omitted? What matters is what we follow.”

The ad used the Preamble before its amendment in 1976, which was when the words were included. Not surprisingly, there was an outcry. However, the controversy posed an opportunity to let young India think about their relevance and import.

Many agree with Vrinda. “Clearly, those words being part of the Preamble has made little difference. Taking them off might actually be just as immaterial too,” says Ravi Daithankar, 31, a management professional from Pune.

However, some said that the omission was a signal of the times to come. “We grew up learning that India is a secular country. This thought has allowed me to follow my faith the way I wanted. But I feel there is a slight imbalance in our secular values of late; with people coming up with statements on how this country originally belonged to the Hindus and their outcry against religious conversions. I do not know how secularism will survive in future,” says 27-year-old Safa Abdul Razak from Coimbatore.

There are those who strongly feel that India’s secular credentials are safe. “Yes, India is secular because the term is an undisputable part of our Constitution. Different communities can display their gods, worship them, and celebrate festivals,” says Neha Mathur, Programme Director, Bright Spark Education, Hyderabad. Keshav Kumar Singh, a Pune-based businessman, agrees: “India, despite the blights in its democracy, is a remarkably secular country.”

But there are others who don’t agree. Are we even secular, asks 23-year-old Hyderabad-based entrepreneur Abhinav Reddy. “In reality, I don’t think so,” he says. “The fact that we have religion-based political parties suggests that we aren’t really people who abide by what’s written.” Sneha Johari, a 28-year-old from Pune, points out, “Both the anti-Sikh riots of 1984 and the post-Godhra 2002 anti-Muslim riots are cases in point that India is no longer secular.” Others recollect recent instances that they have witnessed, which have shattered their idea of India being secular. “I was 18 when my town was engulfed in massive murders,” says Rameshbhai Solanki, a businessman from Ahmedabad. “How can I then call this country secular?” A student of Delhi University, Deepti Mishra travelled to neighbouring Muzaffarnagar in 2013 when the religious riots happened. She still shudders at the thought of going back there.

Interestingly, the discussion around socialism was based in the past. “India has never been a socialist country. Look at the number of foreign direct investments. Also, we are the biggest tax-paying country. How much of this money is spent on the poor? Just compare the infrastructural facilities and quality of teaching in Government schools and the private ones. This will give us a sense of how socialistic India is,” says Razak.

Hari Shanker, a banker in Thiruvananthapuram, believes that India retains strains of socialism, despite being capitalist. “Despite a paradigm shift in our policy towards capitalisation and disinvestment, I believe that our country still holds the tenets of socialism close to its heart,” he says. “Post-liberalisation, a host of multinational giants have set shop in our country. Yet, the government strives to cater to the needs of the ordinary citizens through many welfare schemes. We still have a large public distribution system; rural employment programmes etc. Through a host of such welfare programmes, the government tries its best to ensure the welfare of its citizens. Of course many of these systems are far from perfect.”

Again many youngsters have a contrary view to this. Sundar Yazhin a student from Coimbatore, says “Every sector in the country is privatised. Education has turned into business. Medicine is just another tool for private players to fleece the poor.” Arun Daniel Yellamaty, founder of the Youngistaan Foundation in Hyderabad agrees with this. “The rich are getting richer and poor poorer in India,” he says; a view echoed by Alifiya M. Mamoowala, a home-maker from Coimbatore.

In fact, the terms ‘secularism’ and ‘socialist’ words were added during the 42nd amendment to the Constitution, during the Emergency. The rationale behind it was to reassure the nation that minorities would be safe and the moneyed class would not dominate the economy. To people like Ratnesh Jain, 31, from Pune, those words were important and remain relevant. “Apart from some cultural and industrial development in a handful of states like Maharashtra, Gujarat and Karnataka, others like Orissa, M.P. and Chhattisgarh lag behind in many welfare indicators. Even the progressive states are not free from the taint of chauvinism and communalism. So, I think the retention of secular and socialist, even though discarded in practice, acts as a check on mindless development and communalism.”

On January 26, activist Kavita Krishnan launched a signature campaign against the ad. “Shocking Govt ad on R-Day that cut ‘secular’ & ‘socialist’ from Preamble of Constitution of India,” read her tweet. Rajyavardhan Rathore, Minister of State for Information and Broadcasting, responded, “Are we to say that the governments before 1976 were not secular? That’s not the point. We were secular we will always be secular. We are honouring the first Preamble, hence this picture for the advertisement.” A day after the ad was published, the Shiv Sena demanded permanent deletion of the words “secular” and “socialist” from the Preamble to the Constitution.

In order for such debates around secularism and socialism to be more nuanced, the country needs to focus on education, says Jain. “Our country needs a thorough overhauling of our education system. We need students to start thinking critically of their environment from an early age.”

Devavrat Ravetkar from Pune, on the other hand, feels we need to encourage more political participation from the people. “We need to redesign our systems to strongly encourage increasing participation of citizens,” he says. Amla Sheen, 32, agrees. “We can’t just wake up one day and ask people what they feel about secularism and socialism. It needs to be a constant process. Also, we need to bear in mind that their definitions change periodically.”

During the Constituent Assembly debates, B.R. Ambedkar had expressed his concern over including the two words. Calling them superfluous, he said that the nation is free to decide what path it wants to chart. In this context, it seems pertinent to ask: what is the path the nation is now charting?

With inputs from PARSHATHY J. NATH in Coimbatore;