Hit enter to search or ESC to close
Land & Forest

In January, police in Bhangar, West Bengal, shot two people dead as residents of the village protested a dangerous and unwanted electrical grid 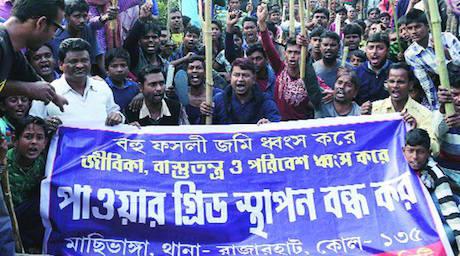 Protestors in Bhangar in January. Kabeer Katlat. All rights reserved.

In a country that is constantly hungry for electricity, residents of Bhangar, a sub-district in the state of West Bengal, are protesting a power grid in their backyard.

In the first two months of this year, palpable tension in Bhangar sub-district in West Bengal raised important questions about state repression in the world’s largest democracy. Men, women and children flooded the streets, claiming the government lied to them and was quiet about the health hazards of an electrical grid being built in their area. The state, in turn, used force to quell protests.

On January 11, villagers began protests in Bhangar, 35km southeast of the state capital of Kolkata. On successive days, there were police raids and arrests. On January 17, two villagers were shot dead. Since then, the issue has gained unprecedented traction, with agitators preventing police from entering the area for seven days in mid January.

Bhangar sits right beside the upwardly-mobile New Town-Rajarhat neighbourhood of Greater Kolkata. It has one of the most fertile tracts of land in India, with farmers harvesting four crops a year. Many villagers work in fisheries as well.

The government took their land in 2012. Since then, the villagers say, they have been painstakingly gathering bits of information about the power grid. Today, they say, they do not want the grid. The electromagnetic impact of the high tension lines crossing above their fields would have an adverse impact on their livelihoods and ecology: “moreover, we fear the leakage of SF6 gas, which can be potentially hazardous,” said Kallu Islam, a resident of Bhangar who protested last month. “If we were not lied to during acquisition, we would not have given up our lands at all,” he added. They were told electricity would be generated for their use and there was no mention of negative health implications.

People have many misconceptions about the power project in Bhangar, said Sobhandeb Chattopadhyay, Minister of Power in West Bengal. “Projects like the one in Bhangar have been set up in several parts of the country, just go and see. We have the necessary clearances and we will reassure the people that there are no health hazards,” he said.

Acquiring land for industrial purposes has always been contentious in the story of India’s development. In trying to compete with China’s galloping growth rate, India has accelerated mineral extraction and industrialisation, the first step for which is land acquisition.

In a traditionally agrarian society like India’s, people do not not easily trade in their land. The state regularly sidesteps consultative processes with residents before taking away their lands, and many of these deals are shrouded in secrecy.

For instance, in October 2016, when the construction of Bhangar power grid was in full-swing, the residents found out that it would not generate any extra power for the region but transmit it to other parts of Kolkata, Bihar and Jharkhand.

“They took our lands for a pittance to transmit power to other places, while we have to face the health hazards emanating from it,” summed up Islam.

High-handedness of the State

The people of Bhangar claim that the Power Grid Corporation of India Limited, which was setting up the grid, did not hold fair public hearings to seek consent of the village leaders. “We speak Bengali in these parts, and certainly do not understand bureaucratic jargon written in English. So, they should have explained the consequences to us in our language,” said Rameez Khan, another resident and agitator.

Such a complaint is commonplace in many large infrastructure projects across the country. India’s diversity requires that literature related to centralised projects be printed in local languages and the officials conduct public hearings to sincerely listen to the concerns of the residents.

On 22 January 2017, K. N. Ramachandran, general secretary of Red Star, alleged he was overpowered, blindfolded and abducted. He resurfaced in Delhi two days later but around that time three of his comrades, Sharmishtha Chowdhury, Shahnawaz Mandal and Pradip Singh Thakur, were arrested by the police in Bhangar. A week later, they were booked under the Unlawful Activities (Prevention) Act, which is usually used in terrorism-related cases. On March 15, two more protesters were booked under the Arms Act.

“If we protest for our lands, they shoot at us and book us under a terror law. How is that fair?” asked Islam.

In the last week of January, after bloody protests, the West Bengal government backed down and called off the power grid. However, this move was retracted in a few days. The residents of Bhangar are furious about the inconsistency of the government’s stance. Even when the government made assurances to the residents that the grid will not be built, the construction work for that very project was proceeding within the boundary walls of the acquired land.The District Superintendent of police, Sunil Chowdhury, said they understood the concerns of the people. “We work for the people and would rather keep violence away. We don’t use force if there is another option,” he said. 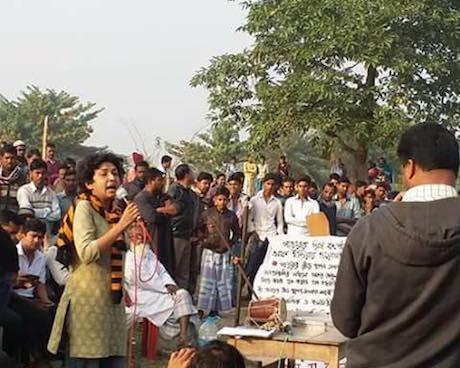 Ironically, the current Chief Minister, Mamata Banerjee, catapulted to power in 2011 protesting land grabs and unfair land acquisition by the previous government. She ended the 30-year rule of the Communist Party of India in the state.

The then-state government of West Bengal had acquired close to 1000 acres of farmland in Singur village of Hoogly district. One of India’s largest corporations, TATA Motors, was to build the world’s cheapest car on the site. But Banerjee had challenged this, saying the rule under which lands were acquired was only for public improvement projects. She came across as an activist-politician who would uphold land rights of small farmers.

“Even Buddhadeb did not slap UAPA, the law for terrorists, during the Singur and Nandigram struggles between 2006 and 2009,” said Ramachandran of Red Star.

However, Banerjee has a tough role to play. Power demands in the state are expected to grow at an annual average of 5% – to 62,926 million units by 2019. Even though the state has achieved near 100% rural electrification, according to power minister Sobhandeb Chattopadhyay, the problem is the quality of supply. “What is the point of connecting all the villages with power cables if there is a low voltage problem for more than 14 hours in a day?” said a senior official at at the Department of Power, West Bengal, who didn’t want to comment on the issue as the matter has reached the courts.

On February 8, the Calcutta High Court questioned the state government and asked why the bullets that killed two protestors were not collected for ballistic examination. The judge said that the court would now monitor the investigation into the police violence in January.

For now, Bhangar is quiet. “After all, how long can we protest?” asked Khan. “We all have our work to return to.”