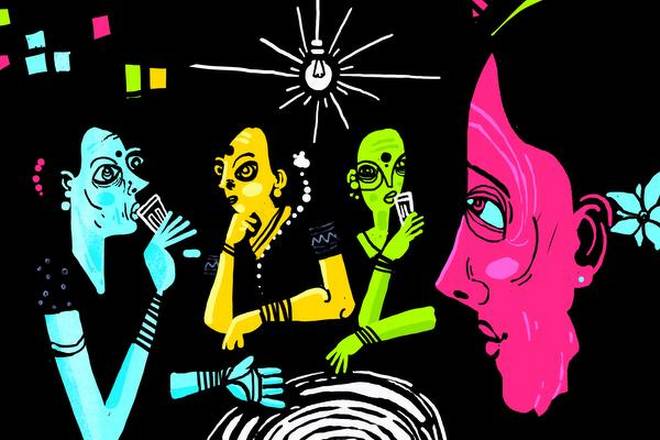 The handmaid’s tales: When we set up a kitty party for Noida’s domestic help

By Raksha KumarSeptember 2, 2017 No Comments

What would the middle-class be without its kitty parties? The women getting together, the snacks, the endless cups of tea, the rounds of rummy or poker, the gossip and, of course, that time-tested staple — the incessant complaints about house help.

‘These people are so ungrateful.’ ‘What about the endless loans I give?’ ‘She always comes late!’ ‘I gave such an expensive sari for her daughter’s wedding.’

In the weeks after July 12, kitty parties across Delhi must have buzzed with extra indignation. That was the day an angry mob of around 200 people — many of them domestic workers — stormed into a gated community, Mahagun Moderne Society, in Delhi’s Greater Noida. They alleged that a house help, Zohra Bibi, had been confined overnight and beaten up by her employers who had accused her of stealing cash. Her husband had complained to the police the previous night that Zohra was missing, but they couldn’t find her. The next morning, a group of people entered the complex, allegedly armed with sticks and stones, and damaged property. A ‘riot-like’ situation ensued and 13 people were later arrested. Zohra was eventually found inside the building complex.

A slum opposite Mahagun Moderne was demolished overnight, and workers across Delhi now have to submit verification forms at police stations. Employers don’t have to fill any such forms, although news reports are usually full of stories of the abuse of domestic workers by employers.

We wondered: Do these workers ever get to meet up? Do they have the luxury to vent about their employers across cups of tea? We decided to set up a ‘kitty party’ for some domestic workers in, where else, Noida. And we listened in on the conversation that swirled around animatedly.

It is 7 p.m. Geeta, in a green salwar kameez, strides through narrow lanes to reach Zoya Bibi’s shanty just in time. “Late ho gayi kya?” she pants, as she throws herself in through the tiny door. Am I late?

Zoya lives in a two-room, tin-roofed shanty. It is the ideal space to meet. Not just is there more space to accommodate the many guests, but the tin roof makes it water-proof too. The incessant drizzle has made many homes in this slum cluster near Noida’s Sector 49 dank and moss-ridden.

“Aaja,” smiles Zoya, her head covered by her sari pallu. “Abhi chai banayi hain.” We’ve just made tea. The room has a small TV and a calendar with a mountain scene hangs on one wall. A rope is strung across to dry clothes. On a stove in one corner an aluminium vessel bubbles with milky tea.

The eight women gathered here this evening sit on the rough cement floor, chatting animatedly. They almost never get to do this, they say.

“We are so busy earning a living, caring for children and rebuilding our homes every season that we don’t ever get to meet just for fun,” says the wide-eyed and effervescent Fatima. “Today, we are having our first ‘kitty party’ ever,” she chuckles at the unusual phrase.

The women are in their 20s and 30s; all migrants from Bihar, West Bengal, Assam and Jharkhand; and all of them work as domestic help in the neighbouring gated communities. Some of them, like Geeta, have come straight from work. “Chudail (devil), she just wouldn’t let me leave,” she complains

This gets Fatima, the chatter-box, all fired up. First, she gives the group a low-down of her tiring day, generously embellished with expletives and then moves on to talk at length about one of her four employers, an affluent cloth merchant. In all four homes, Fatima sweeps and mops the floors, washes dishes and clothes. Her work day begins at 8 a.m. after she is done with her domestic chores. She cooks two meals for her family, cleans her shack, and packs off her three children to school. Fatima ends her rant with “Behen****, itna bhi bura nahi hai. At least he is not like that Moddrren waale.”

She is, of course, referring to the residents of Mahagun Moderne, the luxury housing society in Noida’s Sector 78, not far from where they live. In July, Zohra Bibi was allegedly held captive overnight by her employers there. The news spread and several dozen workers broke into the society, forcing the security guards to fire in the air.

In the days that followed, Noida police arrested 13 people in connection with the violence, all of whom were picked up from the nearby slums that provide these housing societies with the workforce for their homes. Three FIRs were registered against Zohra’s employees. The cases, however, were closed on August 10 with the police citing lack of evidence.

At the mention of Zohra, the women get excited. They start to speak over each other, forgetting the cups of tea in their hands. They have so much to say. “Journalists came to meet us after the incident. They wanted to know if Zohra had stolen anything!”

“Of course they will say she had stolen something. That is their first resort. Why would we work our butts off if we could just steal?”

“Just because we don’t have papers, they think they can make us work for as long as they want.”

“Will they work in their offices after 8 o’clock if they aren’t paid extra?”

Many such comments pour into the circle that the women have spontaneously formed on the floor. They pass around colourful ceramic cups of tea. Some of them are sitting cross-legged and they lean forward, egged on by fury. Others are leaning against the fragile tin walls, almost defeated.

Is there a law?

After a burst of complaints, there is a sudden silence. “The silence after the storm,” laughs Zoya. Several others join in. Zoya works for a businessman. According to her, he is a compassionate man, but he doesn’t allow her to rest at all during her 10-hour shift. She has had two miscarriages and yearns for a break in the afternoons when the children and women of the house sleep.

Sitting in a corner, Rabia, wearing a cotton sari, who appeared to be brooding until now, speaks up. “So, is there a law that regulates domestic work?” she asks no one in particular. The group acknowledges that the 27-year-old Rabia is the most intelligent of them all.

“Rabia has more intelligence than the lawyer I work for,” laughs Fatima.

No one has an answer to Rabia’s question. But she decides to ask the lawyer who visits their slums every now and then. He works on some of their cases. Rabia works for a glass merchant. She says her happiest moments at work are when her employer’s three-year-old daughter comes running to her.

Rabia has to carry her own breakfast and lunch to work. All she gets is two cups of milky tea. “Many days, I have to be at work by around 8 a.m. Before that, I finish my chores at home. There is no time to cook lunch. My children eat mid-day meals in school and my husband manages to eat at work. I go hungry on many days,” she says. 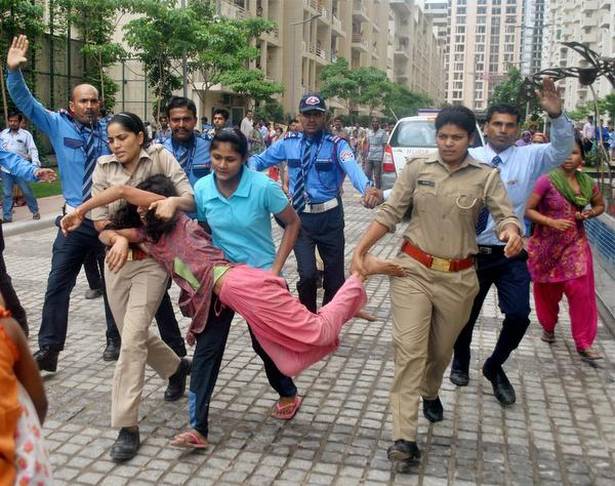 The conversation turns to the police. Zoya is angry that the husband of one of her friends was detained by the police after the Zohra Bibi case happened. “Arre, why go after us?” she asks. “Look at this: Zohra was held captive. She fainted. She was taken to the hospital. She wasn’t given her wages. And when we stood behind her, the police attacked us! Wah ri duniya!”

Fatima’s only complaint is against the old man, the ‘buddha’, in the house where she works. “He must be my father’s age, but stares at me all the time.” It is as if Fatima has opened the floodgates. Every woman in the room then speaks about being uncomfortably stared at or inappropriately touched at some point during their work in people’s homes. “It used to be far worse when I was a teenager,” says Fatima.An hour later, another round of tea is brewed and served. The conversation seamlessly slides to other matters. “So, 502 waali purchased four new shades of lipstick from phoren,” says Fatima. She is referring to the woman residing in Flat 502 in the building she works in. “I wonder how it is that her husband doesn’t restrict her at all.” Before long, the various shades of women’s freedoms and misogyny are being discussed.

“Those women earn their own money and are independent. They don’t listen to their husbands and all,” Geeta retorts.

“So? We earn too! But we have to listen to those mushtandas, no?” says Fatima, her voice a mixture of frustration and amusement. “In fact, my husband has a job one day and the next day he prowls around the house like a tiger in the forest. But he always gets to have a say when it comes to how we spend.”

“In Mehta saab’s house, his wife doesn’t even work. She watches TV, speaks on the phone and instructs her cook. But even her husband doesn’t question her about what she buys and how much she buys,” says Geeta. “Paise ka khel hain.” It is all about money.

“In the penthouse I work in, they have the best of everything. Bhabhi works in some big building. But every now and then, I hear them fight loudly. The man always wants to know what she buys, how much she spends. When she bought a phone for her sister, he went berserk,” points out Rasheeda, who has been rather quiet until now.

After that, Rasheeda is unstoppable. “I think in this man’s world, we have no space. In my village, women are treated worse than dogs, but how different are we in the city?”

“I think employers want to recruit women because they can wield power over us,” she continues. “Ask anyone. They will prefer a woman for domestic work.” After Rasheeda’s tirade, everyone goes silent for a short while, until Geeta asks, “Arre, have you all watched Bareilly Ki Barfi?”

And the chatter begins again.

*The names of the women have been changed on request.

Published in: The Hindu
Published on: 2 September, 2017
Link: http://www.thehindu.com/society/the-handmaids-tales-when-we-set-up-a-kitty-party-for-noidas-domestic-help/article19608802.ece