By Raksha KumarOctober 4, 2016 No Comments

At the recently concluded conference of investigative journalists, Raksha Kumar discovers that collaborative journalism is possible. 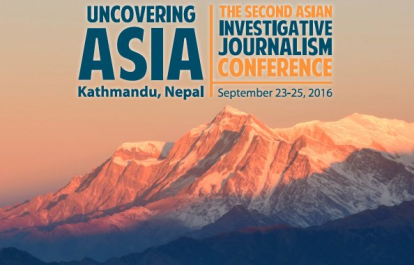 It was one of the most surreal moments of my life. I sat in the middle of a football field sized room, decorated with golden motifs of Hindu gods and expensive chandeliers. About a hundred journalists filled the room, with a sprinkling of media funders, journalism academics and commissioning editors. Their aim: to come up with credible cross-country ideas and to form teams to report on them.

For someone familiar with the 1990s notion of savage competition between journalists, witnessing more than a 100 of them eager to collaborate, was incredulous.

A consortium of investigative journalists from across Asia came together from September 23 to 25 at the exotic Hotel Yak and Yeti in Kathmandu to exchange notes on the trade.

Organised by the non-profit Global Investigative Journalists Network, it was titled ‘Uncovering Asia‘ and attended by dozens of journalists who have a proven record of conducting rigorous investigations in their own countries.

To me, the most intriguing session was on the second day when journalists put aside ruthless competition to concentrate on stories. There were no panels or training which were the norm in other sessions.

Sheila Coronel, Director, Toni Stabile Center for Investigative Journalism at Columbia Journalism School, who was moderating the session announced that there were funders in the room, waiting to finance exciting journalism. They were only looking for good story ideas and a commitment to follow through.

I thought I saw many journalists nodding their heads in disbelief. Few had heard that the problem in journalism was not money. She went on to say that if there are credible pitches from groups of journalists, funding will find its way soon. Groups of journalists to work on one story? It seemed a bit like Panama Papers hangover. Collaborative journalism didn’t happen everyday. I sat there, smiling to myself about the complete impracticality of the idea. How soon I was proved wrong!

The microphone was passed along from one journalist to another. And out came amazing story ideas from across the continent.

In most newsroom meetings where ideas are discussed, words like ‘consumer’ ‘target audience’ and ‘market reach’ are inevitable and considered normal. No one uttered such words in the room. It was clear very early on that stories were their priority.

Anyone who was present there was in a journalist’s la la land. With promises of funding for meaningful projects, journalists were only concentrating on what a good story could be and how it would impact society.

While three people spoke about organ trade in their respective countries, several others felt there was a need for a follow-up of the Panama Papers. Climate change and water availability were other ideas that gained traction. At the end, close to five groups formed organically.

The journalists who had similar ideas came together and exchanged their contact details. Each group was given about two weeks to develop their story ideas into actual pitches. I am a part of one such group and we are doing some pre-reporting in our respective countries. We are trying to look at the root causes of human trafficking in many Asian countries. Where does human trafficking originate, which are the transit countries and which are the destination countries. About 17 journalists working across seven countries are going to contribute reporting.

Over the three days at the conference, there were close to 60 sessions. Investigative reporters from Korea who unearthed a sex scandal relating to the nation’s biggest company, Samsung; those from Nepal who worked on faulty government programmes after the earthquake last year; Indian journalists who uncovered the nexus between government and business that is leading to large scale corruption were all a part of the conference.

While the organisers had made it clear that the GIJN conference was ‘a buffet and not a sit down dinner’, where participants and speakers were encouraged to sample as many sessions as possible, this was one that I wanted to savour in full.