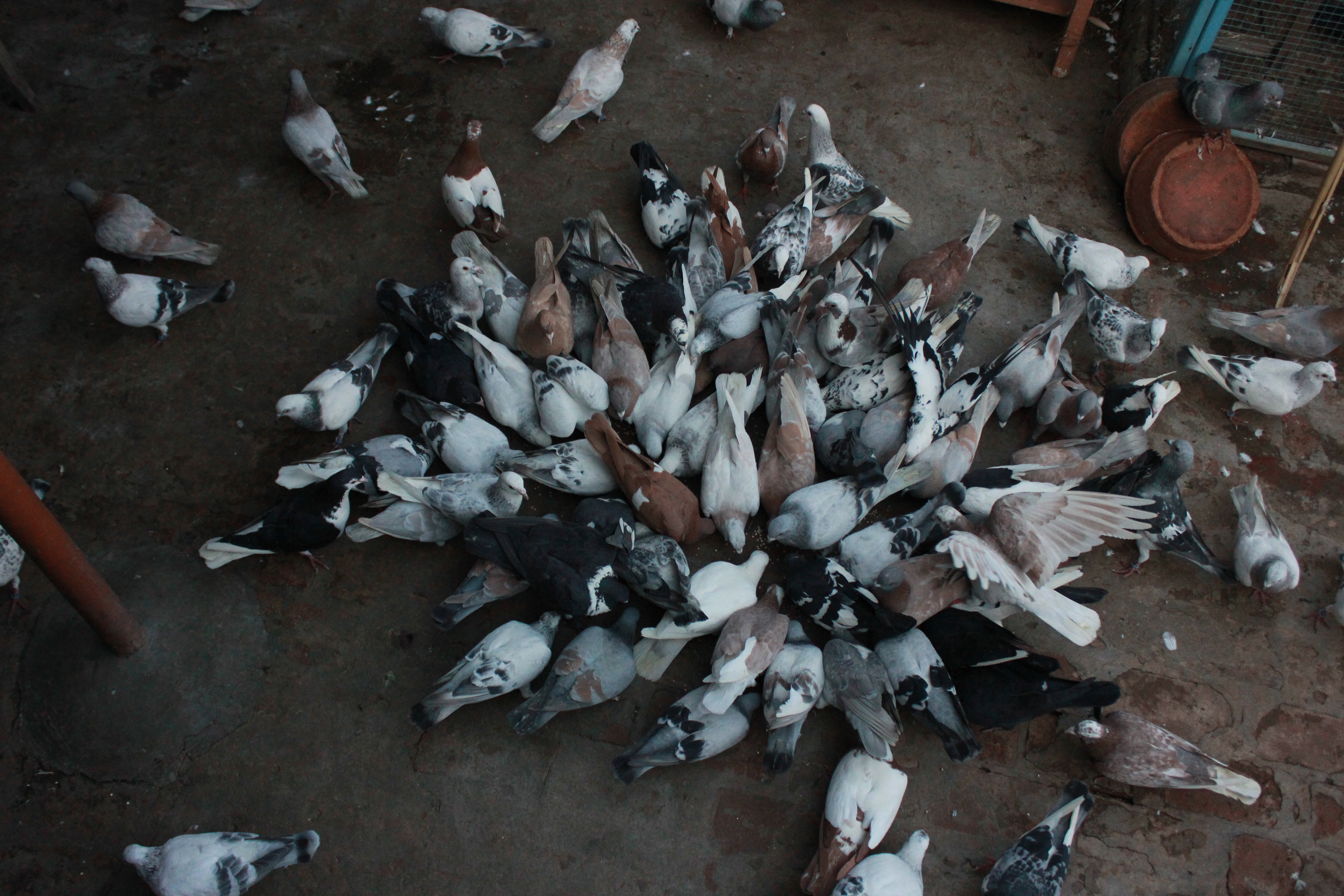 In Old Delhi, the Ancient Art of Kabootarbaazi (Pigeon Rearing) Lives On.

By Raksha KumarSeptember 27, 2012 No Comments

Mateel Qureshi, 27, feeding his pigeons on the rooftop of his house in Old Delhi. 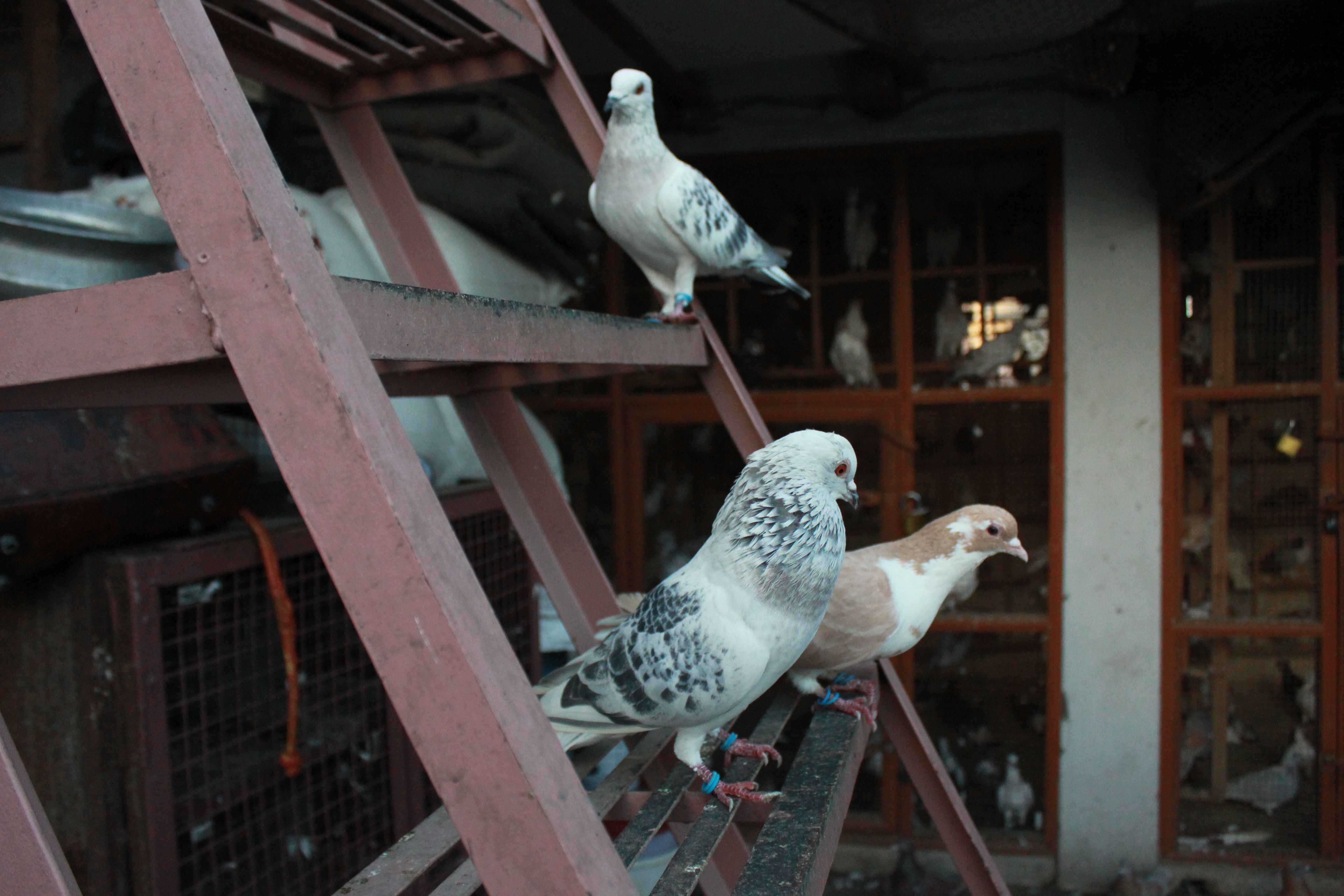 The Qureshi family has owned pigeons for more than a hundred years. They brought pigeons from several cities like Rohtak, Hyderabad, Agra, Kanpur, Patiala, and Ambala.

Mr. Qureshi is struggling to rear the 700 pigeons his family owns now. “It’s a very expensive and time-consuming hobby”, he said. 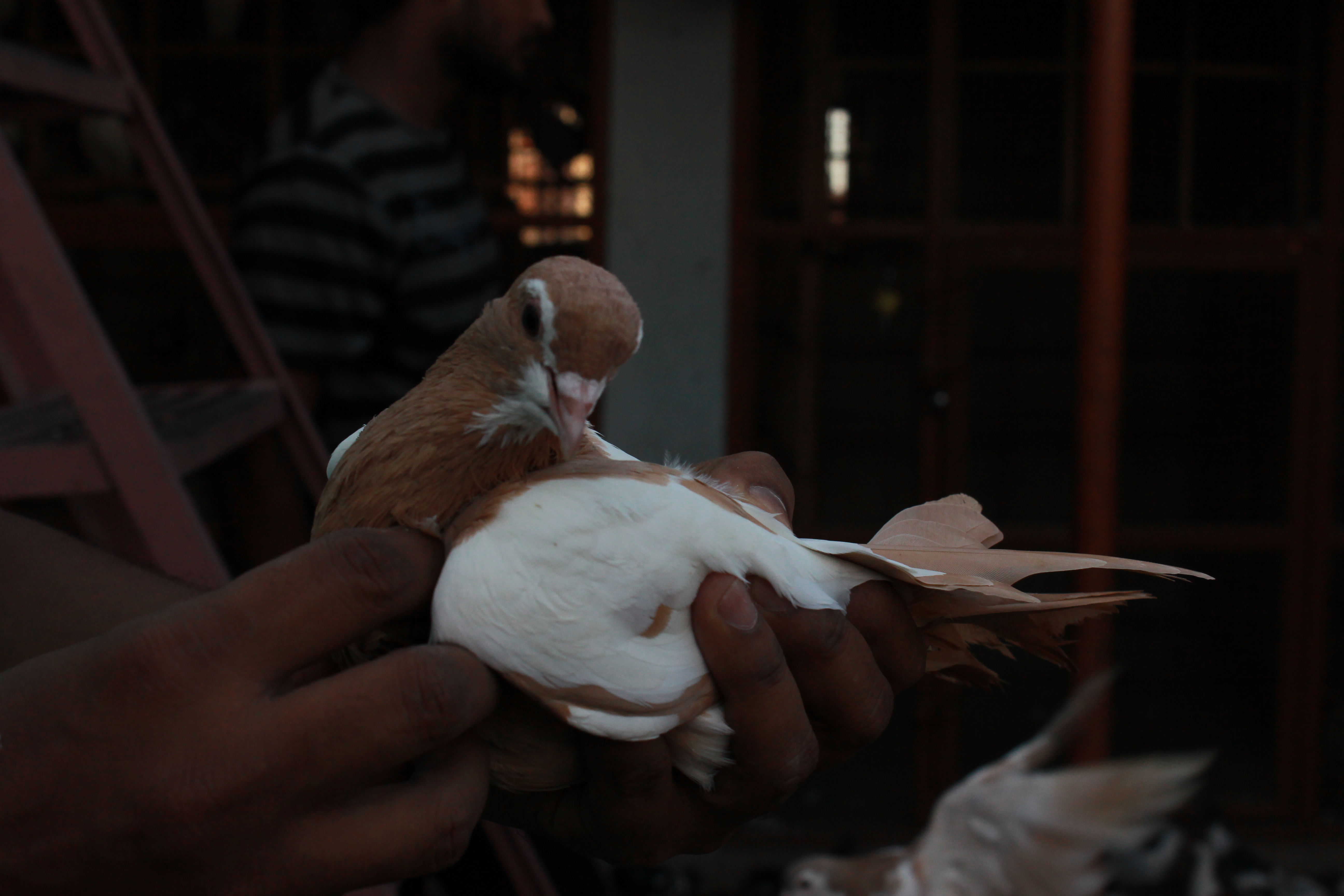 The family bought pigeons to add to their collection. Each pigeon costs more than 2000 rupees ($ 36) and certain varieties, like this Hyderabadi Jungla, cost more. 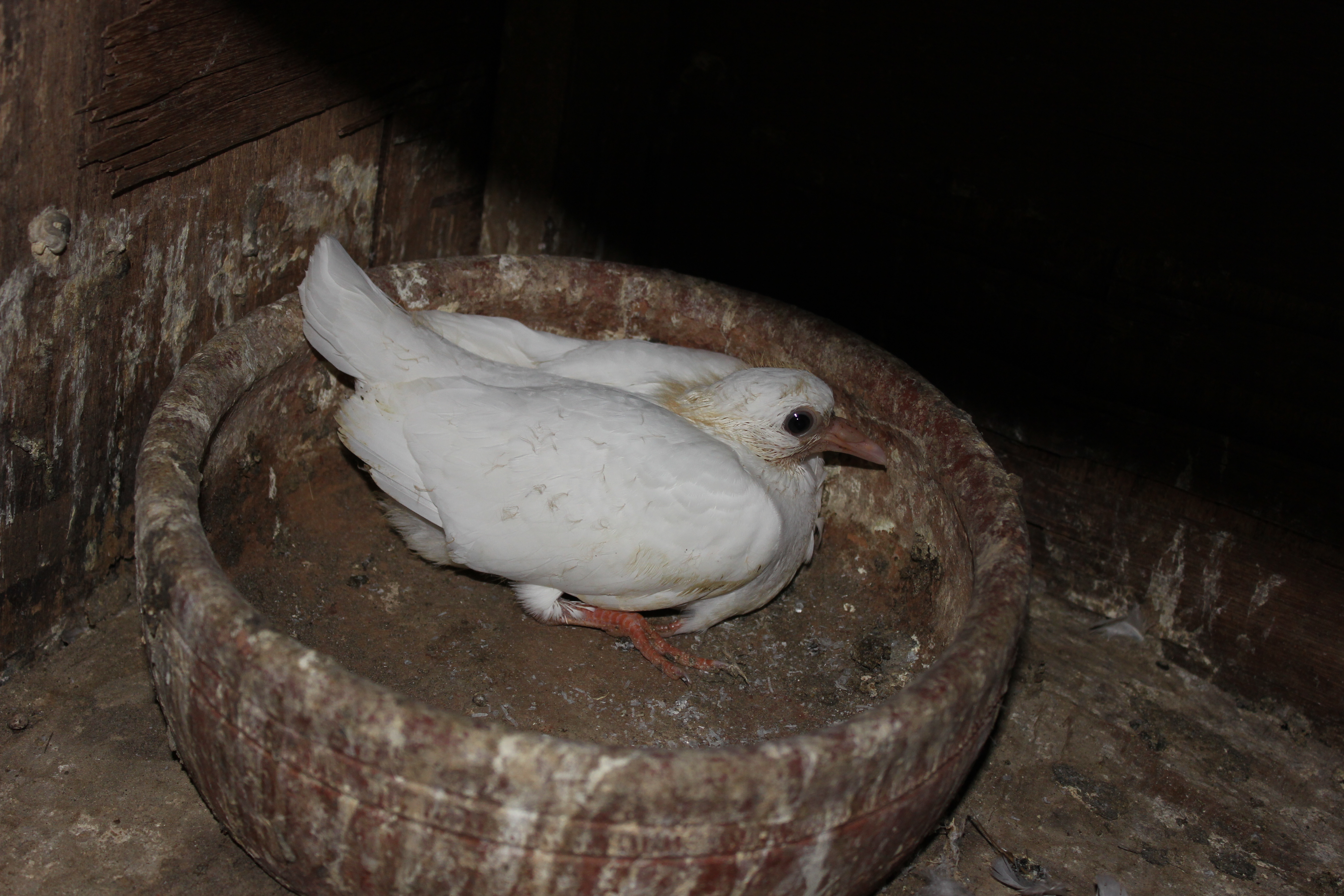 The Qureshi family neither bred nor sold the birds, but this 15-day-old was born in their house. Mr. Qureshi called it ‘a mistake’. 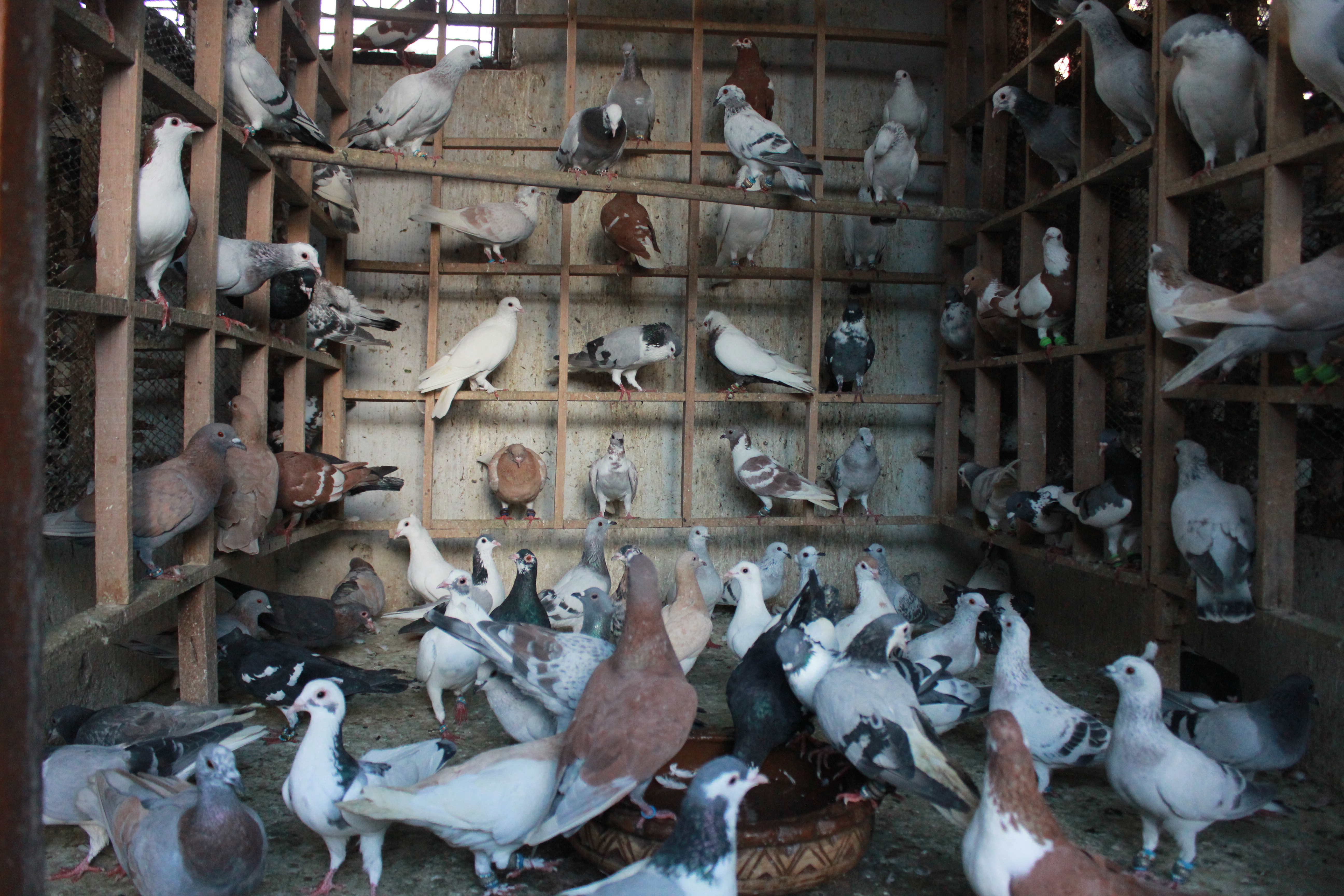 Each pigeon has its own perch so the birds do not get into fights. There are also separate cages for the trained and the untrained as well as for the male and female pigeons.

A pigeon is fed 12 grams (0.4 ounces) of corn, black gram, and wheat per day during summers as they shed their wing feathers to grow new ones. During winters their diet is restricted to black gram. 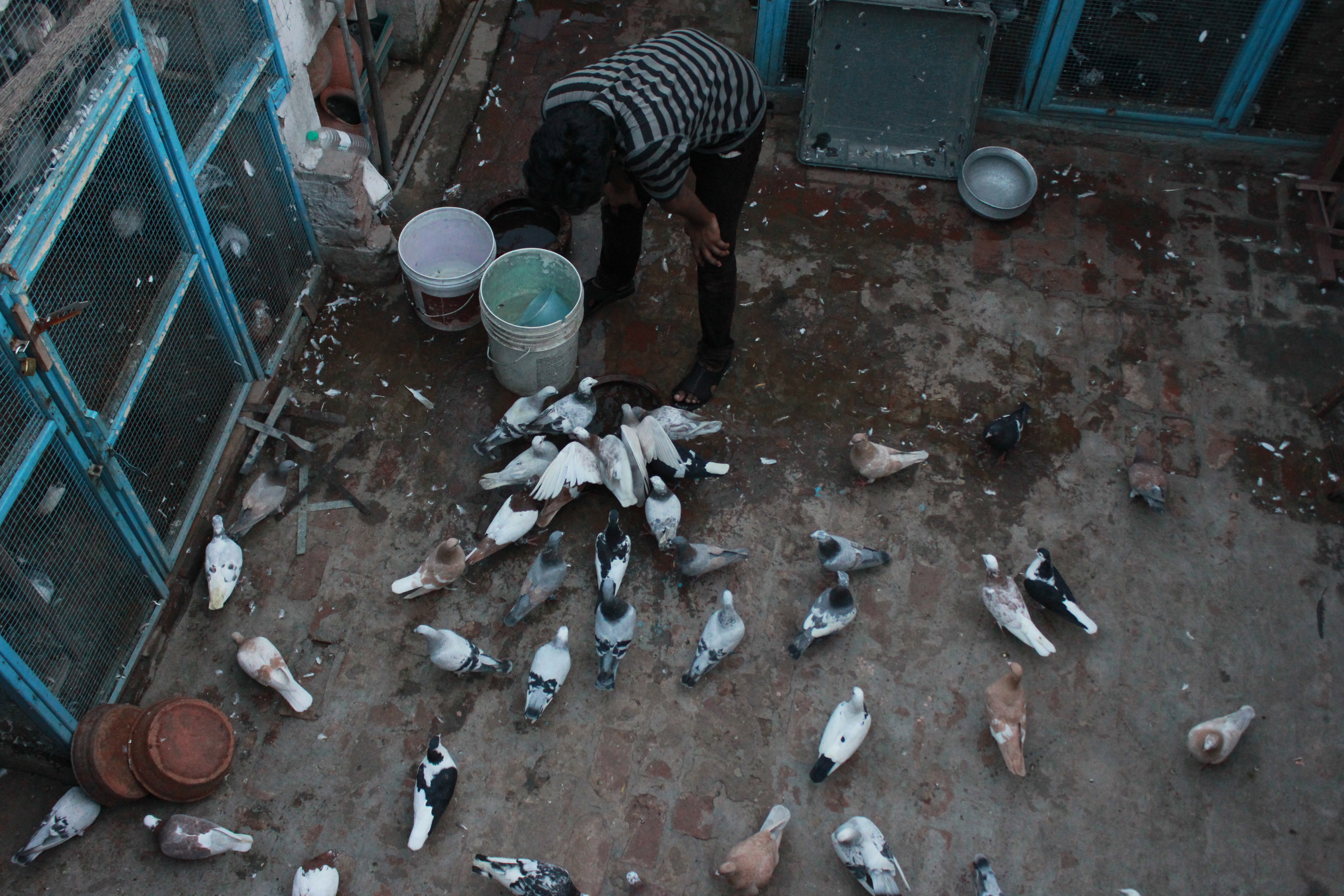 Scented water is kept on the rooftop for the pigeons to bathe in. The scent makes it easier to differentiate one owner’s pigeons from the others.

Owners like Mr. Qureshi also made their pigeons wear small bands around the pigeons’ legs, to help identify them. 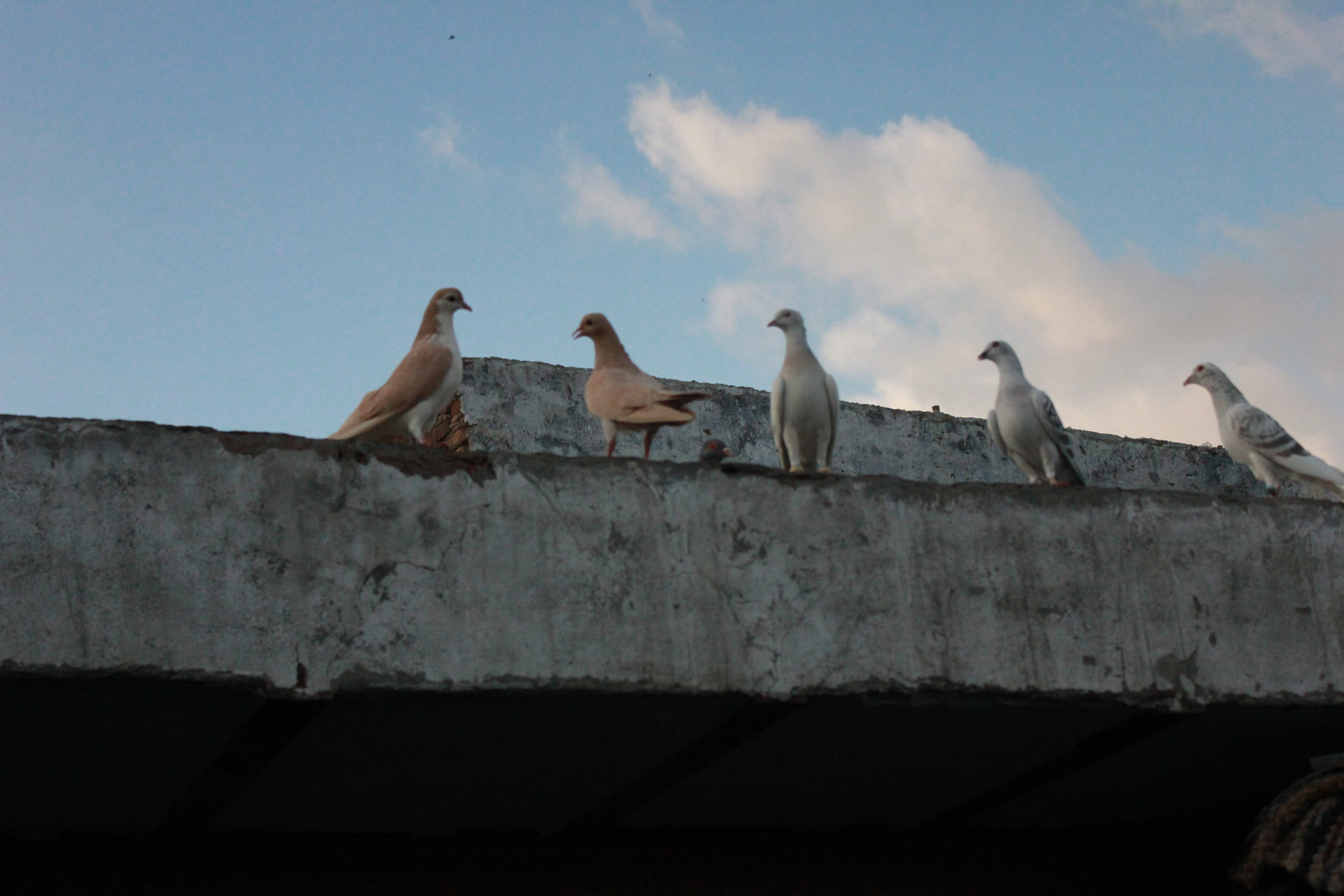 NEW DELHI–One of the winding alleys of the Chitli Qabar neighborhood in Old Delhi leads to a four-story, narrow white house, where several cats hungrily ply the stairs almost constantly.

“We have to keep a strict vigil on these cats all the time,” said the home’s owner, Mateel Qureshi. “They eye my pigeons.”

On the rooftop of the building live 700 pigeons in seven huge cages, one of the most diverse collections of the birds in Old Delhi, where the ancient art of kabootarbaazi, or pigeon rearing, is alive and well. Visitors will notice a distinct odor of pigeon droppings mixed with ittar, or perfume, but the perfume isn’t for covering up the odor – it’s an integral part of rearing pigeons in this part of Delhi.

Old Delhi has been home to pigeon coops like these for generations. Sohail Hashmi, a historian, said pigeon rearing began in the Mughal period, which started in the 1500s, because the rulers wanted to communicate with their aristocracy on a regular basis. Sending messages through pigeons, they learned, was the best way to do so. Mughal emperors supported the pigeon-rearing tradition in Old Delhi. “Almost every noble man had a kabootarkhana (home for pigeons) in his house,” said Mr. Hashmi.

Old Delhi held pigeon competitions in January and February during the Mughal period and for decades after. Owners of flocks of pigeons traditionally spent all year training their birds, as these competitions were very prestigious and the winners highly respected.

Today, the only competition left is the distance-flying competition, in which the pigeon that flies the farthest and returns to its owner wins —a sort of marathon for pigeons. Owners of pigeons gather at a specific place and set their pigeons free. The birds take to the sky and follow a rehearsed route within Old Delhi. Several organizers are stationed at specific points, taking stock of how far each pigeon has flown and within what time. The first pigeon that completes the route and returns to its proud owner at the starting point is the winner.

It is here that the perfume plays a role. Owners bathe their pigeons in scented water so that it is easy to differentiate one pigeon from another. Small bands are also placed on the thin legs of the pigeons, which help the owner identify his bird.

When Mr. Qureshi, 27, opens one of the cages on his rooftop, several pigeons fly out and go straight for the grains that are scattered on the floor. Then, like clockwork, they return to their cages when he blows a shrill whistle.

Mr. Qureshi’s neighbors say he has the largest variety of pigeons in his collection among the estimated hundreds of families that still rear them. He doesn’t sell the birds, Mr. Qureshi said, because “they have been our family’s passion for over a hundred years now.”

His grandfather started kabootarbaazi with only about 200 pigeons, he said, and his uncle took the numbers up to 1,200. But Mr. Qureshi said he can only handle the 700 he has now because he also owns a famous sweet shop, Shireen Bhawan. He spends a couple of hours with the birds each day after he returns home from work.

For the distance-flying competitions, pigeons are trained to recognize the owner’s voice as the owner teaches the birds the route. As Mr. Qureshi and his brother would drive, they would whistle or call to the pigeons as the pigeons flew alongside. On quiet mornings, sometimes the owners would drop grain on the streets for the birds to follow.

Once a pigeon has gone over a route a few times, Mr. Qureshi said, it knows where to go and how to get there, although some pigeons are better than others at memorizing the route.

The pigeons are like any other pets, he said. If you train them to listen to you, that is enough.

It is 5:30 p.m. and Mr. Qureshi pulls away the delicate net that covers the two cages of the birds he considers well trained, about 150 out of his collection. “Fly, my babies,” he said. “It is time for you to touch the skies.” The birds cooed loudly as they emerged from their cages, filling the sky with their gray-and-white bodies.

“They are like any other pets,” he said smiling. “They need to get out for a while. I am sure they will all return.”