A Conversation With: Leena Gita Reghunath, Editorial Manager at The Caravan Magazine

By Raksha KumarFebruary 10, 2014 No Comments

NEW DELHI — From 2006 to 2008, a series of bomb attacks hit civilian targets around India, the deadliest of which was on Feb. 18, 2007, when 68 people died on a train traveling to Pakistan. Swami Aseemanand, a former activist with the influential Hindu nationalist group Rashtriya Swayamsevak Sangh, or R.S.S., has been charged with plotting five of these attacks, which collectively killed 119 people.

Leena Gita Reghunath, editorial manager at The Caravan, a monthly newsmagazine, interviewed Swami Aseemanand four times over the course of more than two years while he was in prison in Ambala, Haryana state, pending trial. Her cover story for the February issue of The Caravan contains explosive revelations from Swami Aseemanand, who told Ms. Reghunath that the attacks were sanctioned by senior Rashtriya Swayamsevak Sangh officials like Mohan Bhagwat and Indresh Kumar. The organization has denied the report.

Since the story was published, The Caravan’s offices in Mumbai and New Delhi have received threatening phone calls. On Friday afternoon, about 100 people gathered in front of the magazine’s office in New Delhi and burned copies of the latest edition of The Caravan.

Meanwhile, in a handwritten letter to TV news channels, Swami Aseemanand has denied giving any such interviews to The Caravan. In response, the magazine released audio tapes and transcripts of the over nine hours of interviews.

Ms. Reghunath spoke with India Ink by phone and email on Monday about the reaction to the story and how it has affected her. 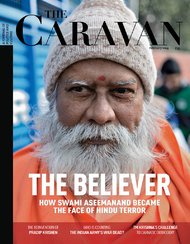 Q. What made you interested in this story?
A. In early 2011 when I was looking for a story idea, I got very curious, first with Aseemanand’s confession that he was among the main conspirators who planted a series of bomb attacks, including the Indo-Pak peace train, Samjhauta, which together took the lives of over a hundred people. His voluntary confessions in front of the magistrates made news, and his retraction made more news. As a journalist, I was interested in the life story of Swami Aseemanand, a lifelong R.S.S. worker and a sanyasi[hermit].
Q. When did you start work on it? How?
A. I started my research around the end of 2011. I read up all the details and newsreports on the cases and investigations, and talked to reporters who had covered the Dangs [in Gujarat, where Swami Aseemanand lived] in the 1990s, and the C.B.I. [Central Bureau of Investigation] and N.I.A.[National Investigation Agency] investigations on Samjhauta attack. The swami had a history of violence.

I went about collecting documents of the cases, wherein I came across the very interesting chargesheet of Samjhauta. And then I wrote a 150-word pitch and submitted it to the editor. And he agreed to send me on a recce to know whether I could meet the Swami.

Q. How easy or difficult was it to gain access to the Swami?
A. In the first one or two months I met his lawyers and hung around the Panchkula court, building contacts. Once they started trusting me it was easy to gain access to Swami.
Q. Why did he agree to speak to you? Did his lawyers know you were meeting him?
A. That was pure luck. Of course, his lawyers knew that I am meeting him. If you check the transcripts, one of them was even in the room when the first meeting was going on
Q. Several media reports and analysts have questioned the timing of the article, a few months before the elections? Your comments?
A. I didn’t pick the time. Aseemanand did. The story wasn’t complete in September 2013 when I filed the first draft. I went and met Pragya Singh, another accused in the same case. Then I went back to Aseemanand again. In January, I had a final closing interview with Aseemanand, where he went ahead and told me the most shocking bit of news, on Bhagwat approving of the terrorist attacks that he was part of.

And so I had to go back to hear it again from Aseemanand to make sure he really meant it, and there it was, he repeated it once again to me, sticking to his lines. And then we realized the story reached its peak of the reporting, and we did whatever we could, and then we had to get it to the public at the earliest.

Q. Did you expect this kind of fallout to the story?
A. I knew the bit I had was very sensational and knew that for any R.S.S. person this would be a blow to the head. But my reporting has opened my eyes to the way they function. It is an organization which seemingly says one for public consumption, and does and believes in another thing, in private.
Q. What are the reactions you are getting now — from the media, from your readers, from political parties?
A. Media, unfortunately tried to play the story down, and I will have to thank the readers and social media for getting after them on this and thereby forcing them to discuss/telecast it at prime time. I received a lot of appreciation from the reporter/writer fraternity and am grateful for their solid support to the kind of journalism that Caravan practices.

It is very worrying that the so called secular parties—the Congress and the Left included—are so guarded in their reactions to the very threat to democracy that this article exposes, and are shying away from their responsibility to this country and its people.

Q. Do you feel a threat to your life now?
A. Of course, I do feel threatened by the violence that they are proud to be practicing. And to top it there are abuses on editors and threat phone calls made to the publishers. After the story became controversial, I haven’t gone back to stay at my place.
Q. What do you expect the course of the investigations to be now?
A. Either the N.I.A. could wait for the public to forget this interview, and go on as if nothing happened – which I doubt. Or they could take this further from here and call Indresh and Bhagwat for an interrogation. Whatever Aseemanand has told me about Indresh, part of it he has also told to the magistrates in the confession and has been faithfully reproduced in the chargesheets. Even then there have been no arrests or even interrogations in this so far. So one can only hope.

(This interview has been lightly edited and condensed.)