Years of living dangerously: Being gay, Indian, in Dubai

By Raksha KumarFebruary 10, 2014 No Comments 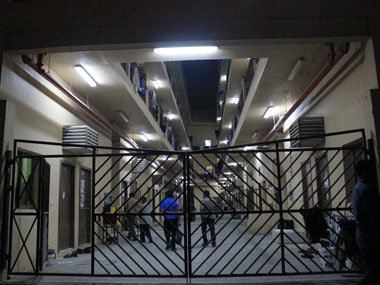 The labour camp in Sonapur, Dubai. Photo by Raksha Kumar

Nadeem sat in front of an imam, lowering his head and not daring to make eye contact. “I have sinned,” he said with a heavy voice, “how do I atone for it?”

Despite repeated polite quizzing by the imam, Nadeem couldn’t get himself to tell the religious man what he was guilty of.

“How could I have told him? Homosexuality is a crime in Islam! I could have been killed,” said Nadeem, who left India to seek work as a construction labourer in central Dubai.

He says there are several of his friends have been living under a shadow of fear for several decades now. “For those who are rich, it is easier to have their secret sex lives irrespective of their sexual preferences and not be intimidated by others. But for us with little money, we are always scared,” says Pasha who came to Dubai 25 years ago.

While Dubai appears modern and advanced in terms of technology and architecture, it is still a young, developing city. According to Article 354 of the Federal Penal Code of the United Arab Emirates consensual sodomy is punishable by death.

For both Nadeem and Pasha the threat is lethal. Sitting in front of a supermarket in Sonapur, a labour camp in West Dubai, Nadeem narrates the story of another man from India who was caught having a sexual relationship with another man by the warden of the camp. “They say both were executed,” he said.

He lives in Sonapur, a labour camp to the west of Dubai. This thirteen square kilometre area houses workers who build the Manhattanesque Dubai that shows off its glamour to the world.

Six out of every ten manual labourers who live in the United Arab Emirates come from India. Others come from Bangladesh, Pakistan, Sri Lanka, and the Philippines.  Most workers live in 12 feet by 12 feet rooms with bunk beds that accommodate eight to ten people and work long, gruelling days in the sweltering heat.

Most of them visit their homes for about a month every two years. They only have to live with each other until the periodic visit home. By some estimates, more than 5000 men live in this area.

When Nadeem first came to Dubai from South Asia, he was 24. He said he had several boys who were his friends in his village, and they played together, swam in the river together and teased each other about marriage. And he didn’t feel intimidated by them. But, “when I first came to the camp, the men here ragged me. They asked me if I liked to sleep with men. I wasn’t sure what to say to them. It took me time to realise that I actually liked to,” he said. He says despite the pathetic conditions he has to live under, the one thing he is glad about is that he discovered his sexuality in the camps.

These camps are overcrowded, have mud roads in several corners, about three mosques where men gather every evening for prayers and a handful of supermarkets.

“There are conservative religious people who reside in the camps who threaten us,” says Nadeem, who met me after a lot of persuasion in a location that was about 35 kilometers away from Sonapur. No one in the camp knows about Nadeem’s sexual orientation, but several people suspect it. “Pyaar chupaye nahi chhupta,” he smiled. It is hard to hide love.

Presently, he has been in a committed relationship with a man who also resides in the same area for more than 2 years. “We are very happy,” he says. Nadeem says his partner is the only reason he looks forward to going back to the ruthless camp.

Since Nadeem and his partner are from different countries, they do not live in the same room. Rooms are allotted according to nationalities. Nadeem sneaks into his partner’s room when his partner’s seven roommates are away. “And that happens once in a blue moon,” he said. They walk in the camps in the evenings, muttering romantic words into each other’s ears. They do get some alone time, if they go out to watch movies over the weekends. “But, I have to send money home, and I rarely can afford a movie,” says Nadeem.

Nadeem’s partner was not willing to meet me, but he sent word that it is unfair that he is having to hide his love for Nadeem.

The country seems less unfair for the wealthy members of the LGBT community.

A wealthy Saudi Arabia national who frequents Dubai met me at the crowded Dubai Mall for a quick interview. “I book rooms at the Hilton or Sheraton when I feel like,” he said. There are also unofficial gay hangouts that circulate the web and are open to people with connections, he said.

Amidst the tension of maintaining secrecy in Sonapur, some find a light moment.

“Back in our country, the source of entertainment and relaxation was sex, before TV came into our homes,” said Pasha and laughed. “I just think it is no different here, given many of us cannot afford televisions,” he added.

Pasha is married and has two children who study in government colleges.