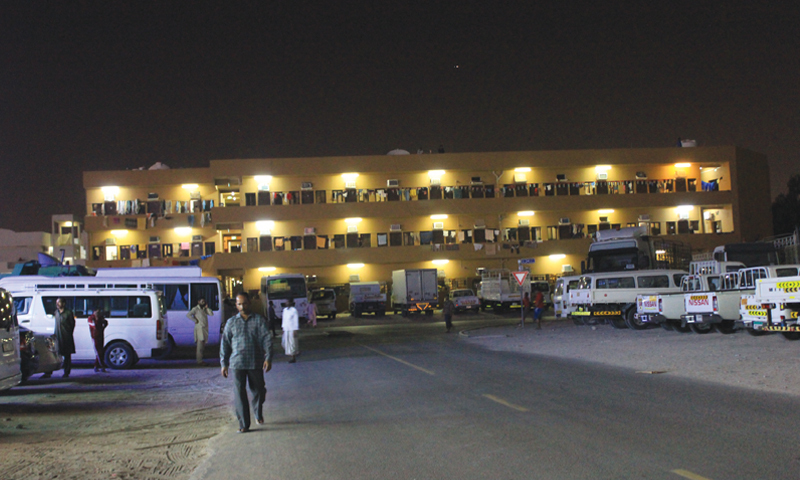 Beyond borders: Chatai, chillum and chai

It is a long queue to the toilet at 5am. While Surender Kumar reserves a position in the line, Mansoor Khan makes some chai for both of them, filling two glass tumblers to the brim and bringing them to Kumar.

“If he doesn’t bring me my cup of tea now, I will not have the time to drink it till about 1pm,” explains Kumar. Both of them have buses waiting to drop them to work at 6am. They work without a break till 1pm.

That’s the standard routine for those who live in this labour camp in Dubai’s Sonapur area. The dazzling high-rises in Dubai are built by a few hundred thousand immigrant construction workers who live in these bare and Spartan labour camps. Sonapur, once a burial ground, is now a collection of tenements accommodating more than 150,000 workers, mostly from India, Pakistan and Bangladesh.

A 12 by 12 feet room in these labour camps accommodate about six people, there are at least a dozen such rooms lining up dank and poorly-lit corridors. Almost all rooms house people from the same country. Therefore Kumar, 32, who is from India and Khan, 28, from Pakistan live in neighbouring rooms. “We are more comfortable with each other than with some of our roommates,” says Kumar. “But, it is the tradition here to live with men from our own countries,” he adds.

Much has been written about the pitiable conditions of these labour camps. As if to battle the unclean common bathrooms, lack of private space and cheerless food is not challenging enough, the workers here have to combat the dizzying Dubai heat for about 12 hours every day. When they return home from a hard day’s work, they seek comfort in their friends and cohabitants. The travails of their daily routine make them forget territorial and political differences.

“There are several people who walk up to us and tell us about what is happening in our respective nations, we don’t care if the bus via Kashmir is running still or if our prime ministers are meeting and discussing issues,” says Kumar. “All we care about is whether the stipulated 140 Dhirams are reaching our houses at the end of every month,” he adds. Kumar has a wife and three children in India, who await his return every two years. He has been living in Dubai for more than eight years now.

Khan is the quieter one. He says he thinks of his village near Karachi very often and when he wants to reminiscence he looks for Kumar who is from Uttar Pradesh. “When we talk about our respective villages we talk of the same things — chatai, chillum and chai,” he says. They talk for hours as if they are talking about the same place. “And, at times, we forget that we are in a third country,” adds Khan.

Khan has a wife and a daughter back in Pakistan, but the person he misses the most is his elderly mother. He left his home country six years ago.

On most evenings, sitting on a four-foot tall wall in their labour camp, they discuss everything — marriage, children, family and life in general. It was in one such conversation that Kumar found out that Khan’s mother was suffering from blood cancer. “I remember he offered all his savings to me instantly,” recalls Khan, “and I couldn’t hold my tears back.”

According to some estimates, about 32 per cent of the UAE’s population is Indian and Pakistani. Therefore, food items and spices catering to their tastes are readily available in many parts of the country.

“Sometimes Khan makes daal that one can die for,” says Kumar. “However at times, when he is in a bad mood, he adds too much salt or too much chilli powder,” he laughs.

One of them cooks once a day for both and they pack the same dish for lunch. Food is cooked on gas stoves attached to propane cylinders in shared kitchens.

Sometimes, they help each other at work as well. Their company, which has a joint Indian-Emirati ownership, has strict rules about taking leave from work. “If one is sick, the other pitches in and works for them, so that the wages are not cut,” Kumar says.

All mushy stories about camaraderie between Indians and Pakistanis have to have a bad guy — cricket. However, in this small corner of the world cricket unites the residents of Sonapur. “We watch the cricket matches together at some community centres or in the rooms of friends who have television sets,” says Kumar. When Pakistan is playing any other country, we want Pakistan to win, he says. But, when Pakistan plays India, we want India to win; he adds and winks at Khan. Khan makes noises of disapproval.

However, the football fever in the Middle East has gotten to most people here. “We appeal to the Indian and Pakistani governments to encourage football. We should have teams that would compete at the world level,” says Khan. “If both Indian and Pakistani football teams play the FIFA World Cup finals, I will surely support Pakistan,” he adds and winks back at Kumar.