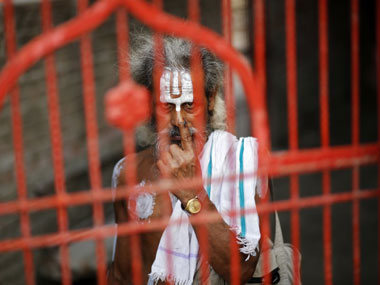 A sadhu shows his ink-marked finger after casting his vote in Ayodhya. Credit: Reuters

Ayodhya: One of the enormous blots on India’s fine, long-standing democracy is the demolition of the Babri Masjid by thousands of riotous Hindus in the cold month of December in 1992. Twenty-two years and six general elections later, when Ayodhya was voting in yet another general elections, I decided to tour the city that changed Indian politics irreversibly.

While the city slumbered through the sultry day, only the polling booths saw some activity. Being sensitive to the city’s history, I asked for directions to the Ram Mandir or the Ayodhya Mandir, but the locals seemed brazen about calling it the Ram Janmbhoomi.

There was no doubt in their minds that the spot was indeed where Lord Ram was born, never mind that the existence of the mythological character is itself in doubt.

Navigating my way through the twisting streets that lead to the Ram Mandir, I reached the first ‘check point’ where all my belongings, including the camera and phone, needed to be deposited. “Security measure,” the person manning the deposit lockers smiled a toothless smile. Security has seamlessly entrenched itself as an essential part of this temple city — making the walk to the Ram Mandir gridlocked.

Then began the long journey from checkpoint to checkpoint — where I was stopped for a full body search and some random chit chat about my profession before I was allowed to go further. While the first four check points are walled by the Uttar Pradesh state police, the last two closest to the temple are manned by the CRPF.

Old timers in Ayodhya gesture with open arms about the expanse that used to be around the erstwhile Babri Masjid. “We could see the river from the Masjid,” said a man who was sitting on a stone bench that was covering the open sewage outside his house.

Now, the maze of barbed wire and grilled pathways that lead to the disputed Ram Janmbhoomi cover a major part of central Ayodhya. The disputed site cannot be spotted from anywhere close by. It remains finely hidden.

Every step I took in that high security zone seemed to nullify the meaning of the votes that were being caste in the city that day. Democracies are not meant to stand back and watch as religious passions are being kindled. Democracies are not meant for the majority community alone. And democracies do not allow the bloody violence that erupted in other parts of the country killing thousands in the name of Ram Lalla and Kar Seva.

When I reached what remains of the mosque, the priest began an elaborate narration of the incidents that led to the demolition of the Babri Masjid. Looking at the tent that housed five statues of Ram, Sita, Laxman, Bharat and Shatrugn — one couldn’t help but wonder why the priest was giving a political discourse to the worshipers and not just the blessing like in other temples. What he hopes will be a Ram Mandir one day, is a plain simple cloth tent today.

“Several people took the bricks of Babri Masjid home,” he proclaimed. Why? “Well, the answer to the ‘why’ is not uniform he said. Some of them kept those bricks in their bathrooms, showing their distaste for the Mosque that was built in place of a temple. While others kept it close to the idols in their homes, with reverence as they were bricks from the place where Lord Ram was born,” he smiled.

So, did those who keep it in the bathroom offend those who didn’t and vice versa? “Hinduism accommodates diversity,” he said. “We give space to people, I am sure you know that as a Hindu,” he retorted, his smile gone. The irony in his speech escaped him. As it has escaped most of the town on the banks of river Suryu.

When asked where Muslims stay in Ayodhya, those that were lazing around in the late afternoon on the narrow streets, looked shocked. “Perhaps on the other side of the river,” said a young boy all of 12 years.

Walking through the city, talking about the fateful day in 1992, just as swarms of people were leaving the polling booth seemed like an anti-thesis to a democratic set-up.

Ayodhya falls under the Faizabad constituency, where there is a strong fight between the Samajwadi Party, BJP, BSP and the Congress. While all the candidates either claim to help aid the building of the Ram Mandir or its stalling, no one is talking about abating the below-the-surface tensions in this temple town.

“We have now gotten used to living with the flood security forces in our town,” said Ram Badri. “It is the price we pay for living in the city that was pivotal in shaping national politics in the 1990s. Whether the temple is built or not, I don’t see serenity returning to this town,” he added.

Published in: FirstPost
Published on: May 15, 2014
Link: http://www.firstpost.com/politics/visiting-ram-lalla-in-ayodhya-on-election-day-1525715.html