By Raksha KumarDecember 11, 2015 No Comments

The Ban on Foreign Clients

One warm morning in October, a usually crowded junction in South Delhi was completely jammed. Close to 100 Indian women, at various stages of pregnancy, took to the streets to rally against the Indian government’s proposal a few days earlier to ban foreign couples from hiring Indian surrogates. Those protesting were surrogate mothers seeking to protect their livelihoods.

Although there is no official estimate of how many surrogates there are in India, let alone the number of surrogates for foreign couples, it is an estimated $400 million industry and growing at roughly 20 percent a year. Women who carry children for Indian couples make anywhere from 80,000 to 200,000 rupees ($1,198 to $2,995), whereas those who work for foreign couples can earn up to 500,000 rupees ($7,488).

Susheela, 28, whose last name has been withheld to protect her identity, is working as a surrogate for the second time. She has carried children for foreign couples on both occasions. Protesting outside the office of the Indian Council of Medical Research (ICMR), a regulatory body that has been entrusted with the responsibility of framing surrogacy laws in the country, Susheela looked determined. “I carried the child of an Australian couple five years ago,” she said. “Now, I am carrying this child for a German couple. And, I have not been denied payment or kept in bad conditions or been ill-treated.” 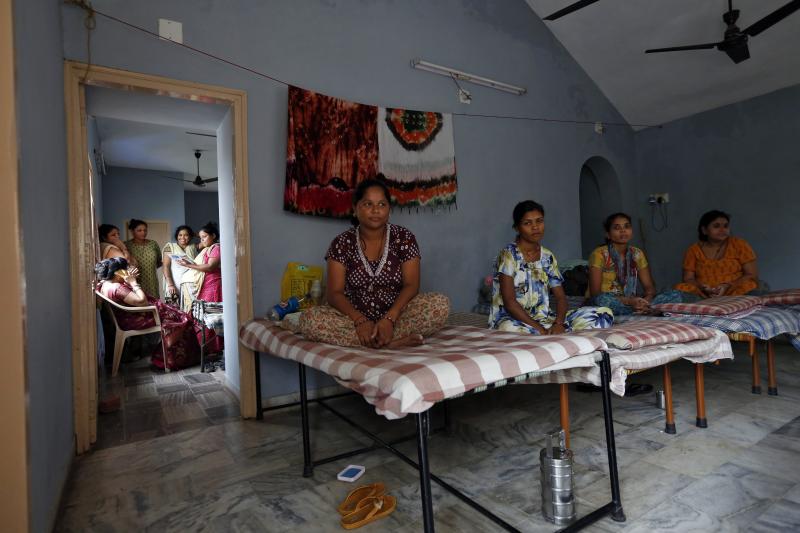 Her words bear a striking contrast to the public interest litigation filed by lawyer Jayashree Wad in India’s Supreme Court, which claims that Indian surrogates from poor and lower-middle-class households are exploited, especially by foreign couples. Stories of abuse include foreign parents neglecting to pay the surrogate or abandoning the newborn after learning of birth defects, creating, in effect, “stateless” children.

India’s first surrogacy case took place in 1978 when a woman in Calcutta agreed to carry a child for her daughter, who was incapable of bearing one. In the early 2000s, India became a favored destination for commercial surrogacy, a process that involves implanting a lab-developed embryo in the surrogate’s womb. The trend was driven by the availability of excellent medical facilities for extremely low prices and the fact that the procedure was not banned there as it was in many Western countries such as France, Germany, and Spain.

In India, the industry remains unregulated, barring a few guidelines drawn up by the ICMR. The recommendations include the provision of psychological assistance to the surrogates and steps that a fertility clinic needs to take in order to register a surrogacy. These guidelines have now been incorporated into a legally enforceable contract, which the surrogate signs with the commissioning parents in the presence of medical professionals.

Yet this document is no insurance against exploitation of a surrogate, especially if she comes from a less privileged background, according to Ranjana Kumari, director of the Centre for Social Research in India. Many surrogates are illiterate and do not understand the terms of the agreement, she says. Susheela, for example, who worked for a posh South Delhi clinic, signed her contracts in English but says she understood little of it since she can read and write in Hindi, her native language.

Still, Kumari believes that banning foreign couples from hiring Indian surrogates will not solve the problem of poor regulation. “A ban will only help in the flourishing of a black market,” she says. “When you try to make anything illegal, it will only find back channels.”

Gita Aravamudan, the author of the 2014 book Baby Makers: The Story of Indian Surrogacy, agrees. Although she has heard of Indian women complaining that they fell ill after being injected with too many hormones, the issue is not to ban surrogacy but to offer better oversight of the practice. “The way out of that is to ensure that the contracts that they sign are enforced,” she says. “Not banning foreign couples who pay more than Indian commissioning parents.” In the United Kingdom, for example, commercial surrogacy is banned but is allowed if done on a voluntary basis. In fact, says Aravamudan, “People tell me that a lot of money is paid under the table. Corruption doesn’t happen only in India. It happens everywhere.”

This precautionary step is absent when it comes to Indian commissioning parents. Observers, including Aravamudan, believe that the absence of this step raises the potential for abuse among Indian couples.

For example, on the condition of anonymity, one doctor at a fertility clinic in Mumbai told me that in 2010, one clinic accidentally implanted the wrong embryo inside the surrogate. The mistake was not discovered until after the baby was four months old. When the couple found out that the baby was genetically not theirs, they abandoned it.

Framing laws on surrogacy is no easy task because it involves adding new definitions to existing laws and making sure all parties involved—the genetic parents, the surrogate, and even the child—receive protections. No country in the world has a legal framework for commercial surrogacy. If India manages to legally regulate commercial surrogacy, it will be the first.

At the moment, India is pioneering a draft surrogacy law, called the 2014 Assisted Reproductive Technology (Regulation) Bill, and it is pending discussion in the Indian Parliament for the summer of 2016. It has been revised three times since its introduction in 2008, and it seeks to ensure better living and medical conditions for the surrogates, among other things.

“Most existing laws in India are inconsistent with the needs of surrogacy,” says Hari Ramasubramanian, chief consultant at the Indian Surrogacy Law Centre. For instance, he says, minute details such as the legal definition of a “mother” would need to be altered to specify that biological mothers and legal mothers need not always be the same. Therefore, passing a law on surrogacy requires changing existing laws on parenthood.

Also, there are many participants in this industry whose rights are even trickier—for instance, the rights of the surrogate child. “The child has not asked to be born,” says Aravamudan. “Therefore, its rights are something that needs to be taken into account. For instance, in India the eggs need not be of the woman who commissions the baby. If the child wants to find out its biological origins after many years, there is no way it will be able to given the current guidelines.” 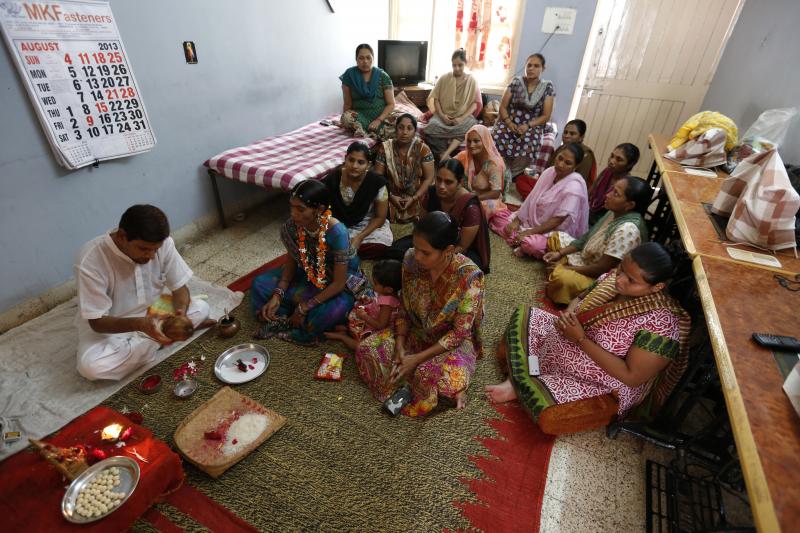 Since surrogacy is a maze of complex legal and ethical issues, Ramasubramanian feels that it should be decided on a case-by-case basis. “The right to have a child should be decided based on whether the couple can be good parents,” he explains. “We should ensure the children are not being given to pedophiles or drug addicts, etc. It should not be decided by citizenship.”

The ICMR denied an interview request, claiming that the case was due for hearing in the Supreme Court and that they did not want to comment until a judgment was handed down.

For her part, Susheela is from a small village in western Uttar Pradesh. After being married at the age of 16, she had to stay behind in the village when her husband went to Delhi to support them both. After four years of hard labor as a construction worker, he finally saved up enough to rent a small shanty in Delhi for the two of them. A few months later, a man approached her, explaining that he was “an agent” for a fertility clinic in Delhi.

At first, Susheela, not understanding the science behind surrogacy, expressed shock at the idea of carrying someone else’s child. However, when the doctors at the fertility clinic explained to her that she would not have to engage in sexual intercourse, she realized that it was an incredible and lucrative opportunity for her.

“What my husband earned in four years, I managed to earn in the one year that I carried a child for the Australian couple,” says Susheela. She was paid 120,000 rupees ($1,797) when she delivered the child. There are other perks as well. Susheela was given paid vacation time in a surrogate home, a specially designed residence that belongs to the fertility clinic to ensure that the women are well-fed and cared for. At the surrogate home, Susheela received hot meals and could sleep as much as she wished to. When she carried her own child, she had to wash dishes in a local restaurant over a mile away from her house. “Even when I was seven months pregnant with my child, I was washing the dishes for about seven hours a day,” she says.

A number of women like Susheela have also benefited a great deal by working as surrogates. Bina Bai, from Darbhanga in the state of Bihar, was also protesting along with Susheela. She is a first-time surrogate and says she is enjoying the process. She receives hot meals three times a day and will receive 200,000 rupees ($2,995) after she delivers the child in three months. That is equivalent to almost three years of harsh agricultural labor back in Bihar.

Like these women, Susheela feels that the surrogacy industry should flourish, even though she might never be a surrogate again. The rule allows a woman to be a surrogate only twice in her childbearing years. “I didn’t have to sleep with any man to make that money,” she says, alluding to India’s growing prostitution industry. “I got it in a dignified manner. That is all I care about.”