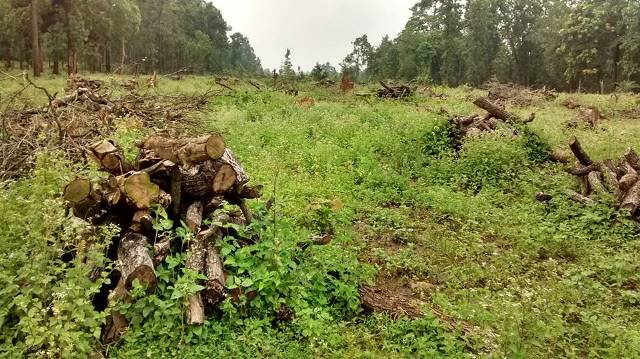 In the shadow of an upcoming iron ore mine in Chhattisgarh, people live in fear of the gun

By Raksha KumarFebruary 1, 2016 No Comments

Increased BSF presence and arbitrary arrests are muting the local resistance to the mining in Rowghat range of hills.

When Anup* of Albeda village was walking home at dusk one July evening, seven policemen approached him from behind and told him he was under arrest. He says he was beaten brutally and taken to the Kanker police station. No case was filed against him. For ten days he was made to squat on the floor and kept tied to a table. “I repeatedly pleaded with them to at least tell me why I was arrested,” he said. “But the police were mum.”

After ten days, he was summoned by the superintendent of police Jeetendra Singh Meena and forced to sign on a blank sheet of paper. “They said if I do not sign on the paper, I could not go home,” Anup said.

While his family was tense about his whereabouts, they could not approach the police. They knew better. “Just weeks before my husband was arrested, our neighbour was picked up,” said Anup’s wife. “When his wife approached the police, she was harassed and sexually abused.” He was eventually set free after 28 days.

The superintendent of police was not available for a comment at the police station and has not responded to phone calls from Scroll.in.

The residents of Albeda village in Chhattisgarh’s Kanker district suspect the reason for Anup’s arrest was his close connections to the Rowghat Sangharsh Samiti, an organisation that has been opposing the Rowghat iron ore mines since the mid-1990s.

Iron ore for the steel plant

About 150 kilometres south-east of the state capital Raipur, the Rowghat range of hills form the border between Chhattisgarh’s Kanker and Narayanpur districts. The hills contain an estimated 700 million tonnes of iron ore spread over more than 1,700 hectares, one of the largest deposits in the country. The Steel Authority of India wants to mine the iron ore to feed its highest profit-making unit, the Bhilai Steel Plant, located more than 200 kilometres north of Kanker.

Currently, the plant gets its iron ore from the mines in Dalli-Rajhara, located halfway between Bhilai and Kanker. In the early 1990s, the Central government had allocated a portion of the Rowghat mines to the Steel Authority of India. But the company did not get environment and forest clearances till mid-2000s.

“Ever since the Bhilai Steel Plant was allocated these mines, the villages in the surrounding areas have seen a steady increase in security forces,” said Keshav*, a resident of Chhote Jaitpuri in Kanker district. In November 2012, the Bhilai Steel Plant took it upon itself to “fund barracks” of the paramilitary forces near the mines and all along the rail line that would connect Rowghat to Jagdalpur, the largest commercial centre in Bastar district.

Travelling west from Jagdalpur, over the Keshkal hill range, the stretch of 26 kilometres from Antagarh to the forested hills of Rowghat is lined with Border Security Force personnel on both sides of the road. There are about half a dozen BSF camps here. Most vehicles are stopped for checking.

The BSF camp closest to the hills of Rowghat – beyond which are the dense forests of Abujmarh – is in Sarangipal Village. An armed BSF guard enters the details of any vehicle and driver who cross that camp and go beyond in a register titled “Bhilai Steel Plant register”.

“It is because of the forces that the opposition to the Rowghat mines has been successfully quelled,” said Lachchu Ram, a resident of Kumhari village. 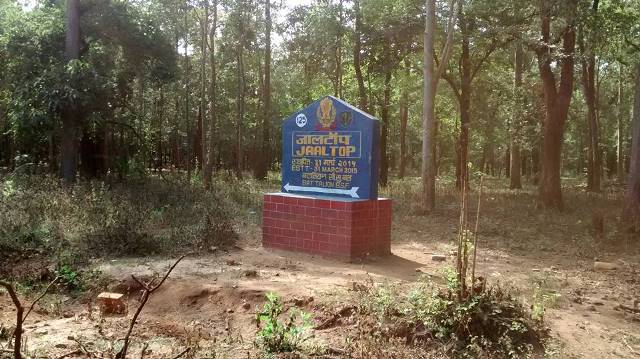 Opposition to the mines

Many villagers are opposed to these mines for environmental, religious and political reasons. If the government has its way, 2,029 hectares of reserved forest land in the region, according to Chhattisgarh’s forest department, would be flattened to dig up iron ore buried under it. The forest department of Chhattisgarh found pug marks of four tigers in the forests of Rowghat in November. Rowghat is religiously important for the local Gond community – their three-day annual festival Sesa is celebrated here every February, attracting thousands of adivasis.

Rowghat hills line Abujmarh, which is considered the citadel for the banned Communist Party of India (Maoist). According to a BSF officer, who requested anonymity since he is not authorised to speak to the media, it is important to gain influence over Rowghat so that they can cordon off Abujhmarh and limit the Maoist influence in the region.

As preparations to start mining in the area began, villagers questioned the need for the mines at public meetings, engaging with the sarpanches of the villages and holding discussions with the mine workers.

One person who stood out amongst the villagers was 40-year-old Badri Gawde from Antagarh in Kanker district.

Gawde was a political activist who had supported Vikram Usendi of the Bharatiya Janata Party in the 2013 assembly elections. Subsequently, however, he had switched to the Congress party, and was also an active member of the Rowghat Sangharsh Samiti, where he organised many protest meetings.

While Gawde was walking in Kanker one evening in January 2014, a police jeep slowed down next to him and policemen picked him up. He was taken to the local police station and booked under the Chhattisgarh State Public Security Act and the Arms Act, and shifted to the jail in Jagdalpur. In June 2015, a local court sentenced Gawde to seven years’ imprisonment for harbouring Maoists.

After Gawde’s arrest, Dharam Korche, a farmer from Hapra village, began to lead the agitation. But his protests weren’t allowed to last long either. In June 2015, around the time Gawde was convicted, Korche was arrested. He is currently in Jagdalpur prison. “Look at the documents submitted to the court that book Korche in this case, they are so weak and random that it almost feels as if the police do not want him convicted,” said Isha Khandelwal, Korche’s lawyer.

According to the legal aid group JagLAG, which works in Jagdalpur, arrests are an intimidation tactic. “Conviction is not important,” said Shalini Gera of JagLAG. “People should merely be scared of the forces.”

It isn’t just the leaders of the anti-mines movement who have been arrested. Shivram*, a subsistence farmer in Kanker, had been vocal at public forums for the need for fair compensation for those being displaced by the mines and the railway line. In September 2015, he was arrested for “disturbing the public peace”. He was released 12 days later. “Since my arrest, I am even scared to stand on the road and chat with friends for more than five minutes,” he said, visibly shaken. “They might book me for spreading political views.”

An NGO worker who spoke on the condition of anonymity said, “The harassment of those who oppose the mines intensified after the prime minister visited Bastar in May this year and signed an MoU for the extension of the second phase of Rowghat-Jagdalpur railway line to Dantewada further down south.”

Fear of the gun

People associated with Gawde and Korche are not willing to make their names public for fear of being arrested. “We are always living in fear that is worse than the fear of the gun,” said a resident of Albeda village who worked closely with Gawde. “It is easier to die than to be arrested by the police. They not only torture, but also humiliate in such a manner that a person’s self-image is completely broken.”

Ram Singh Kureti*, 35, who felt strongly against the Rowghat mines was arrested in August and after about a week in prison was let go. He says he is hesitant to visit Gawde in prison as that can give the authorities an excuse to arrest them on the grounds that they maintain relations with the Maoists. “I am now on their radar, I have to tread carefully,” he said.

The residents of several villages that this correspondent visited, such as Rohindargra, Chhote Jaitpuri, Dangra, Bhaisangaon and Gondbinpal, among others, complained of harassment from the Chhattisgarh police and the BSF deployed in the area.

According to a 2012 study by the People’s Union for Civil Liberties, the armed personnel to civilian ratio in Antagarh is extremely disproportionate. “If one considers the entire population of Antagarh block, which is 64,820 as per 2001 census data, this amounts to a ratio of one soldier per sixteen civilians,” the report states.

“When they fell trees in our backyard, the entire area is cordoned off by the BSF,” said Siddhu Achla, 28, a resident of Gondbinapal. “We cannot go out of our houses.” The trees will make way for the 127-kilometre-long rail line from Dalli-Rajhara to Jagdalpur. They are cut mostly at night and local police join the BSF men to keep watch. Another resident of his village said that the scene almost looks like they are doing something illegal.

“I will never be political again,” said Anup, with a decisive nod. What changed him was the birth of his youngest daughter on August 28, just a day after he was released. “I love my family too dearly to enter a tunnel which has no light at the end of it.”

* The names of villagers have been changed to protect their identities.