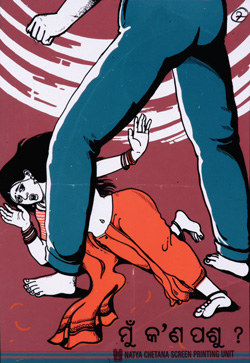 By Raksha KumarSeptember 10, 2012 No Comments

Every time you think the society couldn’t degenerate any further, there is an example that proves you wrong. Justice Bhaktavatsala, a Karnataka High Court judge, was one such example that came up this past week when he justified wife beating, reportedly in a matter-of-fact way.

However, the light at the end of the tunnel became brighter as all family court matters, including child custody and guardianship, was shifted from him to other judges by the end of the week. This came as a result of many online petitions and protests by Women’s Rights organisations.

That is not the end of the story. If anything, it is the beginning. When a qualified man speaks frustrating non-sense with effortless ease, it is sign that the society needs a serious revamp.

Addressing a woman in a marriage dispute case, Justice Bhaktavatsala had said, “Women suffer in all marriages.  You are married with two children, and know what it means to suffer as a woman. Yesterday, there was a techie couple who, reconciled for the sake of their child. Your husband is doing good business; he will take care of you. Why are you still talking about his beatings?” he said to a woman who had accused her husband of excessively beating her.

When I first heard about blatant gender bias in the Karnataka High Court, a part of me was in denial. I wanted to believe that Justice Bhaktavatsala’s blasphemous comments were an aberration.

But, no. Bhaktavatsala’s idea of justice includes several other gems of patronising, male chauvinistic thoughts. In August, the same judge told a young woman lawyer who was trying to argue in a marriage dispute case, “Family matters should be argued only by married people, not spinsters. You should only watch. Bachelors and spinsters watching family court proceedings will start thinking if there is any need to marry at all. Marriage is not like a public transport system. You better get married and you will get very good experience to argue such cases.”

Unfortunately for women, there are many in the rank and file of the judiciary who consider women subordinate to men, and as instruments meant to comfort and please men. The question here is of law versus justice. Can having stringent laws to protect Women’s Rights change outlooks and provide women with the justice they deserve? A well implemented law is more important than a law on paper. The Convocation on the Elimination of All Forms of Discrimination Against Women (CEDAW), believes that Indian law ranks much higher than most countries when it comes to the issue of gender justice.

However, justice is a combination of enactment of laws responsive to the changing needs of time, their effective enforcement and their proactive interpretation and application. How can justice be strengthened if not by educating the dispensers of it? The Justice Bhaktavatsala incident is a wake up call for the Indian judicial system that it is not enough to merely have stringent laws, but also to genuinely educate the dispensers of justice so as to open their minds to the changing times.

When less qualified men make gender biased statements, we put it down to their lack of exposure and conveniently ignore them. Once, an auto-rickshaw driver had said to me, “poore kapde pehenegi to koi chhedega nahi, (you will not be teased if you are fully covered)” gaping at my jeans and cotton top. I had smiled at his perspective and disregarded it, knowing that saying anything will fall on deaf ears.

If things are as bad today, I can’t help but wonder how things would have been without decades of arduous Women’s Liberation movements across the civilised world. Or did they help at all?