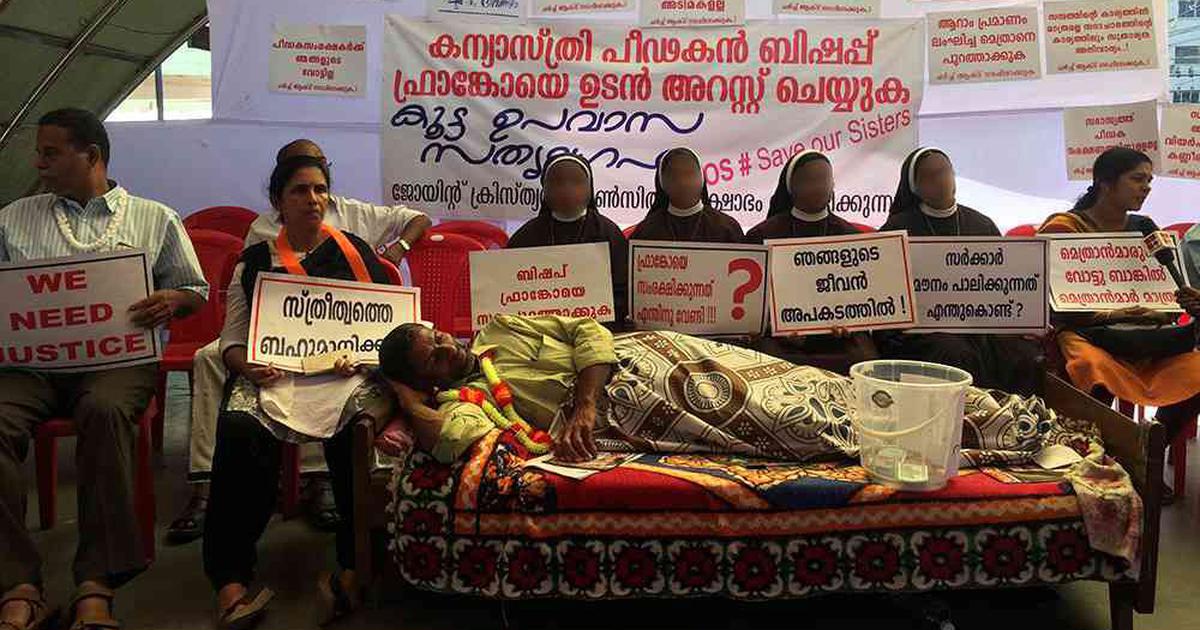 Kerala nun says she wants Church to admit she was wronged: ‘I had moments when I asked god, why me?’

By Raksha KumarDecember 10, 2018 No Comments

In an interview, the complainant and her five fellow nuns say they won’t give up the fight against rape-accused bishop.

There is one question many want to ask the nun from Kerala who has accused a bishop of raping her: why did she not speak up earlier? After all, when the police in Kerala’s Kottayam district registered the 44-year-old nun’s complaint on June 27, she alleged that Jalandhar Bishop Franco Mulakkal had sexually assaulted her 13 times between 2014 and 2016.

In an interview to Scroll.in at her convent in Kottayamon November 13, the nun from the Jalandhar-based Missionaries of Jesus congregation had a simple answer to the question. “Because I was scrambling for support and initially found almost none,” she said.

But eventually, she did. In early 2017, five nuns from her congregation came out in her support. Over the course of the year, they sent written complaints to various authorities of the Catholic Church in India, including Ernakulam-Angamaly Archbishop George Alencherry, Bishop Joseph Kallarangatt of the Pala diocese in Kerala, and the mother superior of their congregation. Between January and June this year, they also wrote a letter to Pope Francis and two letters to Vatican authorities demanding action against Mulakkal. When the Church did not act against the bishop, they went to the police.

On September 8, the nuns took the unprecedented step of staging a public demonstration in Kochi’s Vanchi Square, protesting the alleged delay in police action against Mulakkal. Around that time, an umbrella movement of lay people took shape in Kerala to fight the nun’s case.

The Kottayam Police arrested Mulakkal on September 21. A day before the bishop’s arrest, the Vatican had, on his request, temporarily relieved him of his duties at the Jalandhar diocese. Less than a month later, on October 15, he was granted conditional bail by the Kerala High Court and released from jail a day later.

The nuns’ actions may now have an impact far beyond the confines of the Church in India. In October, a public interest litigation was filed in the Supreme Court, seeking directions to bring religious places under the purview of the Vishakha Guidelines, according to which employers are required to have mechanisms in place to redress sexual harassment in the workplace. The petition, by advocate Maneesh Pathak, also sought background checks on religious leaders so that the women working with them feel safe.

“I never knew my complaint would take matters this far,” said the nun. “All I wanted was for the Church to recognise that I was wronged.”

The complainant and the nuns supporting her live in the same convent in Kottayam where she was allegedly abused by Mulakkal. The building, surrounded by banana and coconut trees, is guarded by three policemen.

Speaking to Scroll.in, the complainant looked back on the last few years. “We are taught that questioning the bishop is akin to being satanical, so when I began resisting him, I thought I was evil,” she said.

She also spoke of how she had become a nun. At 15, she enrolled in a religious school, she said. After five years of training, she became a temporary member of the congregation. Another five years later, she was made a permanent member. “It never occurred to me to be anything other than a nun,” she said, explaining that she came from a staunchly Catholic family with two priests – her uncle and a cousin. Giving herself up for god gave her life purpose, she added.

Sister Anupama, one of the nuns supporting her, recalled the founder of the Missionaries of Jesus, Reverend Symphorian Keeprath, having noticed the complainant’s kindness and selflessness early on. She was eventually made a mother superior and given the responsibility of all the other nuns, a charge she held for nine years.

Another nun remarked, “She took keen interest in our well-being, physical and spiritual.” She added, “It is because she was such a kind soul that when she was wronged, we supported her wholeheartedly.”

When the nuns started their fight for justice, attempts to discredit the complainant swiftly followed. Anupama alleged that on November 14, 2017, Mulakkal held her in a room for close to eight hours and tried to get her to write a letter falsely implicating the complainant. “He repeatedly asked me to write that she was lying and that the rape charges were wrong,” she said. “That is when I decided that we cannot remain silent.”

But the nuns said they have also received overwhelming support. In September, “Save Our Sisters”, a collective of eight independent church organisations, was set up in Kerala. It drew support from various civil society groups.

In October, PB Binoo, a lawyer from Thiruvananthapuram, started working on a draft bill that seeks to expand the provisions of the Sexual Harassment of Women at Workplace (Prevention, Prohibition and Redressal) Act, 2013, to include religious institutions.

The same month, the nuns received a letter of support from an 86-year-old priest, who requested a meeting with them. “When he came in a state government bus, took an auto and walked the last few miles to meet us was when we realised that we are not alone in this fight,” said Anupama, requesting that the priest not be identified to ensure his safety.

On November 9, the Indian Women Theologians Forum wrote to the pope “seeking justice and expressing deep concerns over the manner in which sexual abuse is handled within the Church in India”. The letter was endorsed by 800 Catholics from around the world, including 500 from Kerala. The signatories included 71 priests from India. The letter also called for immediate implementation of the Catholic Bishops’ Conference of India’s 2017 guidelines on addressing sexual abuse in the Church.

Then, on November 14, more than 250 people marched to the Kerala Government Secretariat in Thiruvananthapuram to demand an unbiased enquiry into the nun’s allegations.

But there has also been some pushback against the nuns. In October, the Kottayam-based Catholic Federation of India threatened to launch a movement to evict them from the convent, accusing them of staying there illegally. Then, a news report on November 23 said the mother superior of the Missionaries of Jesus had written to the Kerala Police saying the congregation did not have the “financial capabilities” to meet their demands for additional security for the nun and her five supporters at the convent. She suggested that the six nuns be moved to a government facility.

The death of a key witness in the case, Father Kuriakose Kattuthara, added to the drama. Kattuthara, who had deposed against Mulakkal, was found dead in Jalandhar on October 22. His family has filed police complaints alleging that he was harassed by Mulakkal and sought an inquiry into the 60-year-old priest’s death. The Jalandhar Police have said there were no injuries on his body, according to ANI. The final postmortem report is yet to be released.

For the six nuns, the case is now the centre of their lives – a departure from the previously ordinary lives dedicated to god, truth and spirituality that they had chosen for themselves.

“I had several moments when I asked god, why me?” the complainant said. “But, after a while, I realised god had chosen me as an instrument to ensure that nuns do not suffer this way in future.”

Expressing the hope that her case would act as a deterrent, she said, “No nun should ever have to go through this.”

All six nuns have faced hardships since they decided to take on the powerful within the Church. They said they have had false complaints filed against family members, had their characters and intentions questioned. More than anything, said Anupama, “We don’t like living in captivity.”

The nuns said they do not venture out of the convent unless it is to see a doctor. As for the complainant, she has started taking walks in the convent premises only since the beginning of November.

The nuns are aware the court battle will be long, but they are not willing to give up the fight. “If your husband is ill, would you leave him to die?” asked one of them. “We are married to the Church that way, we know it has major illnesses and we are hoping to help it cure itself.”

The complainant said her intention initially was not to go public. “Even now, I maintain there should be an internal mechanism within the Church where we can complain,” she said. “That will ensure the Church does not face public humiliation.”