Making child’s play out of banking in India

By Raksha KumarNovember 19, 2014 No Comments

Sarjan Bank, run by local children under 13, teaches other poor children in Ahmedabad how to save for crises.

Ahmedabad, Gujarat – A pioneering Indian bank is teaching the impoverished children of an overcrowded Muslim neighbourhood in Ahmedabad how to save for a crisis.

Sarjan Bank bank at Sankalit Nagar in the neglected western neighbourhood of Juhapura is proving highly popular with local pre-teens – who are also helping to run it.

Operated by a non-profit organisation, the bank has provided families that have fallen on hard times or been victims of the city’s periodic bouts of inter-communal violence a lifeline – literally.

“The other day, my teacher told me that I could use the money in my account in case my mother needs medicines when she is ill,” says little Zia Mirza, whose father is a rickshaw driver.

“And a month later, it happened! My mother fell ill and wanted medicines and my father didn’t have any cash. So, I came here and withdrew Rs 200 ($3.25),” says the nine-year-old with an accomplished smile.

Sarjan Bank can be found down a muddy, restricted road in Sankalit Nagar that leads to a decrepit building ironically named Gudiya Ghar – the Doll’s House

The unlikely home of this bank for children also houses a creche for toddlers, computer classes for teenagers and a centre for self-employed women.

The bare white walls of the Doll’s House have seen better days, the floor is uneven and the stench of cow dung and spoilt vegetables hang heavy in the air.

Yet that does not stop children in the neighbourhood rushing to the building every day after school to visit the bank as customers, but also to help run it.

“It is a bank for us children, so we come here every day. We not only meet our friends at the bank, but it is also nice to take stock of our savings,” says Zahira, who has amassed the grand total of Rs 450 ($7.30).

It may not seem much, but even such small amounts could make the difference between life and death in this poverty-stricken ghetto, confirming the importance of the bank’s motto: “Our savings are for our difficult times.”

“One realises the value of that amount during difficult times – at that time even Rs 450 seems like 45,000,” says Madina Ben Solanki, a representative of Sarjan Trust, the non-profit organisation that has run the bank since 1976.

The children are repeatedly told stories of how their savings could be used during times of crisis, in order to encourage the habit of saving.

Today, the bank has just Rs 21,000 ($340) under management – but its 11-year-old manager Amreen Kalubhai Sangaria confidently insists that it is growing. 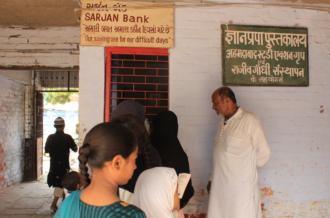 Despite its small scale, Sarjan Bank has provided an important safety net for some local families facing both poverty and the consequences of inter-communal violence.

Farzana Sheikh, 42, who was the first manager of the bank back in 1976, believes it has played a valuable role in helping the community to survive.

“We, as children, always felt the need for spare cash – whether we were in trouble due to natural calamities or religious riots,” she said. “Even saving Rs 50 ($.81) used to be a big deal for us.”

Juhapura evolved as a cluster of slums and villages on the western part of Ahmedabad but began to grow rapidly in 1973 when it became the site of relief camps for victims of massive flooding of the Sabarmati river.

After religious riots in the city in 1985, Muslim migrants from other parts of Ahmedabad flocked to settle in the district following every communal clash.

It grew and is today a crowded locality housing more than 240,000 people who comprise up to a half of Ahmedabad’s Muslim population, according to scholar Christopher Jeffrelot’s book Muslims in Indian Cities.

But it remains cut off from the city, lacking infrastructure, clean drinking water or regular electricity – creating bleak economic conditions for local people.

Haji Mirza, one of Juhapura’s three councillors, says people line up in front of his office every day demanding safe drinking water but his ability to help them is limited.

“Due to such situations, sometimes in crisis, parents are forced to dip into the minuscule savings of their children – instead of saving for the young ones’ future,” he says.

And after 2000, Ahemdabad was plagued by the threat of strife, culminating in the 2002 riots in which an estimated 3,000 Muslims were killed, according to NGO figures, while official government figures state that the number is more than 1,000.

Nilofer Ben, who was then aged 12, began making greeting cards at a neighbouring shop to add to the family’s income. The Rs 5 ($.08) she made every day regularly went into her account at Sarjan.

When Juhapura was hit by three days of bloodshed in 2002, referred to locally as toofan –  literally, hailstorm in Hindi – Nilofer’s family was badly affected and her mother, Jameela Ben, was left lying in a pool of blood on a street corner.

Nilofer rushed to the Doll’s House to ask Solanki if she could withdraw the Rs 400 ($6.49) that she had painstakingly saved in her account.

“Jameela Ben got her first aid because of her daughter’s timely savings,”  Solanki says. “She is alive today because of that.”