By Raksha KumarNovember 9, 2014 No Comments 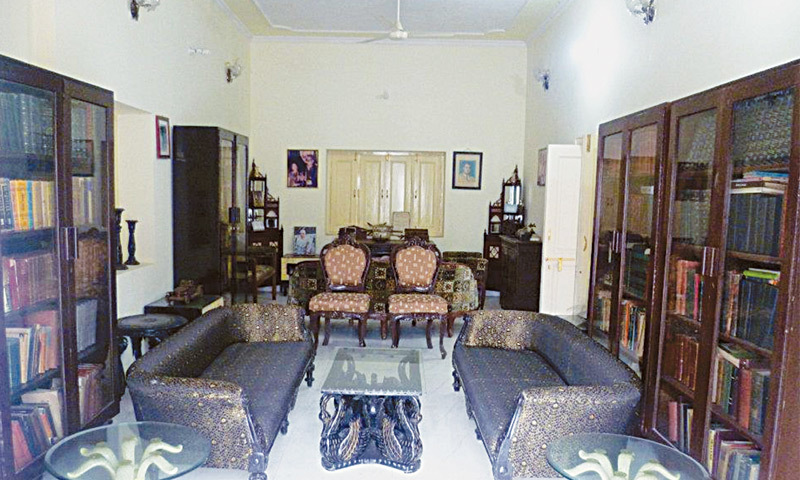 In the 19th Century, the residents of Old Delhi (or Shahjahanabad), who were contemporaries of Ghalib and Zouq, stood nonchalantly in street corners to share and appreciate their poetry. With chai in one hand and chillum in the other, they chattered away into the evening enjoying the way the words of poetry hung amidst the slight winter winds.

It was at one such informal poetry meet of four friends, in Central Delhi, that a friend casually recited:

“Kya baat hai!” we exclaimed in chorus! The innocent question in the third line of the qataa and its dejected but quick withdrawal caught our attention. Thus, our introduction to Jaun Elia was brief, but compelling; enough to form a life-long bond.

Hungrily, we rummaged through the internet to search and savour his couplets, we shared them eagerly with each other every day. Within in no time, we began to idolise him.

Several months of hasty hunting for his published works came to naught. Just as we were about to give up, a small shop in a cramped street of Chandni Chowk proved to be a beacon of light. We bought five of his titles and managed to read through them in record time.

The titles of his books — Gumaan, Lekin, Shayad, Ya’ani and Goya — rife with uncertainty and insecurity, are nothing like the poems inside. Few poems in those books reflect ambiguity, and most are assured in their cynicism, clear in their sarcasm and composed in their melancholy.

The greatest draw towards Jaun’s poetry was his inimitable style which is a drastic departure from the traditional Urdu poetry of Ghalib, Meer and Zouk to Faraz and Faiz. His poetry seemed bereft of the self pity that is abundant in the traditional Urdu poetry. His idea of romance was that it is merciless and passionate at the same time, as exemplified by this couplet:

The idea of bemoaning an indifferent beloved, something that has become a defining character of popular Urdu poetry, has been turned on its head in many of Jaun’s couplets.

For Jaun, life was a bigger misery than unrequited love. One can’t help but wonder if he was the aloof lover that many traditional Urdu couplets admonish. 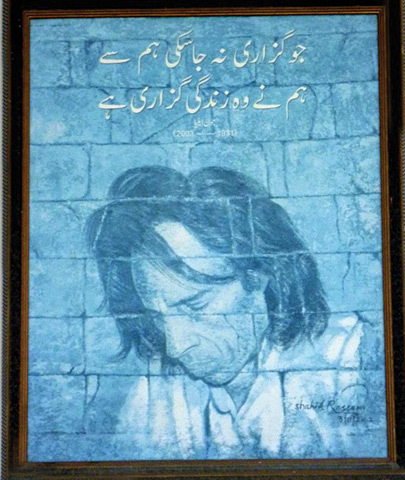 These enticing and fresh ideas made us curious about the man, his thoughts, his beliefs and his life. He died on the November 8, 2002, about four years before we accidentally discovered his seminal work and therefore meeting the man will remain an unfulfilled dream. We decided, however, that we would explore his ancestral home and speak to the relatives he left behind in India before he migrated to Karachi in 1957.

Hopping into a car, ignoring the chill of a January morning, we sped towards Amroha — 150 kilometres southeast of Delhi. Going past the joyous mustard fields we reached a decrepit town, with fervour in our hearts, like devoted pilgrims.

“Jaun Sahib did come to India a few times after he moved,” said Ali, the person who takes care of the ancestral home of Jaun Elia and Kamal Amrohvi, the acclaimed filmmaker of Pakeezah fame. The two cousins shared a great equation, according to several people of the household.

While the rooms on the ground floor are museum-like with items that were used by Kamal Amrohvi’s family, those on the first floor accommodate guests. Standing in the courtyard, gazing at the shy blue skies, we thought of Jaun’s childhood days spent running through this very space and his youthful days spent here reciting his soulful poetry.

While we drank our cups of tea, Jaun’s nieces and nephews scrambled through their memories to find the slantest of references to him. From several testimonies, we found that one common thread in his life was despair at not being able to find his ideal partner. We didn’t need to go to Amroha to understand that; his poetry is full of such despondency.

After returning from Amroha, we spent several evenings raising a toast to the man and his spirit. An essential element of many of our parties still remains the few YouTube recordings of Jaun reciting his own poetry. Drunk on misery and dejection, Jaun sways as he recites his poems in a mushaira, just a few years before his death. The malnourished-looking almond shaped face is covered by black sun glasses that efficiently hide his sad eyes.

“Charasazon ki charasazi se …”, he says in his sorrow-laden voice, and pushes his shoulder-length hair behind his ear. “Dard badnam to nahin hoga …”, he completes a misra.

Calling the attention of his fellow poets on the stage, he continues, tears rolling down his eyes,