Seeking justice for rape by the state in Bastar, India

For tribal women living in the Bastar region of central India, sexual abuse at the hands of security forces has become routine. The state government has now been challenged to take responsibility. 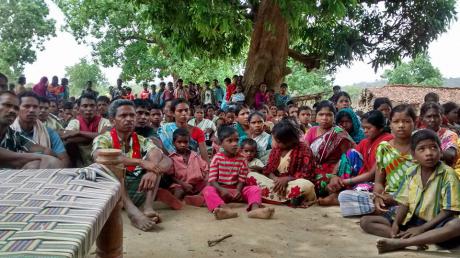 People gather in a village in Bastar to discuss atrocities by security forces. Credit: Raksha Kumar

I work as a reporter in the central Indian state of Chhattisgarh. Chhattisgarh is now home to the most militarized zone in India, Bastar, and has been mired in conflict for around three decades. The reason? The government wants to start work on one of the largest iron ore mines in India, among other industrial activity. The Maoists, a left-wing guerrilla movement that has operated in the country for more than fifty decades, are opposing mineral extraction in the region, as well as other forms of corporate industrialisation. The troops have been positioned in the state to contain the Maoist violence.  However, as is the wont of militarised societies, the security forces are running havoc in the region. They are accused of extra judicial killings, fake arrests, pillage and sexual violence.

On the 7th of January, the National Human Rights Commission, a national statutory body tasked with upholding human rights, said that sixteen women were subjected to rape, sexual and physical assault by security forces in Bijapur district of Chhattisgarh in October 2015. The onus is on the state government to prove the security forces did not overstep their duties. This is a step in the right direction, as rape in Bastar occurs so frequently that it is often ignored by the authorities, as well as the national media.

For example, between February and May 2016, from the district of Kanker, the stories of five rapes in four villages in the Antagarh region of Bastar reached me through word of mouth. Local journalists and non-profit organisations claimed to be ignorant of the situation. I decided to do a tour of the four villages – Bade Pinjodi, Pusagaon, Hurra Pinjodi and Marma – on a motorbike and by foot.

There are no roads that lead to these forest villages. Some of the houses are so scattered that each hill in the village has only one house. While most of the villagers knew of the stories, no one was willing to give any details. The fear of the paramilitary camps near their village was too strong. With polite offers of water and tea, they would change the subject. “This is a recent phenomenon. Villagers would never go mum earlier,” said Sushil Sharma, editor of Bastar Bandhu, a newspaper published from Kanker. “People don’t speak anymore as they know that they will have to face the brunt of the situation later.” Finally, in a weak moment, one man from Bade Pinjodi said woefully, “no woman is raped in this village. Not even my wife.” 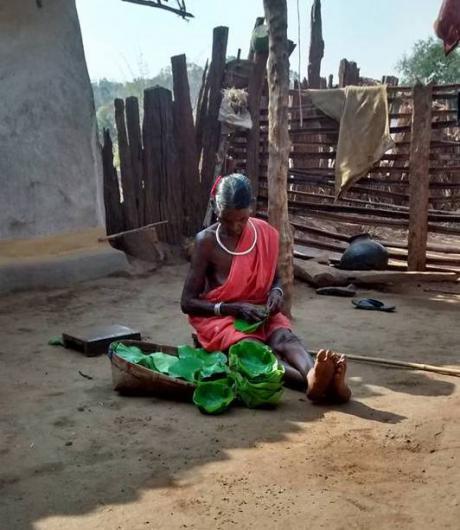 An old lady makes vessels out of leaves, used widely in the region of Bastar. Credit: Raksha Kumar

A culture of silence and impunity

A long history has led to the present culture of silence.

One of the worst recent instances was in October, 2015. While on patrol, paramilitary forces reached Kunna, a sparsely-populated village in South Bastar, and forced themselves into the houses of the villagers. They began looting chicken, rice and other grains. However, they didn’t stop at that. They demanded that the women of the village sleep with them, mockingly asking if the women wanted to conceive. They squeezed the breasts of several women to see if they were lactating or not.

Such physical torture and sexual violence is common in Bastar. Justice for these women is a distant dream as state structures break down in this conflict-ridden region. The difficult terrain, scattered with remote villages, make it almost impossible for news of such exploitation to be made known soon enough.  After three decades of conflict, it was only a year ago that the first police complaint was filed against some of the men in the paramilitary forces. Women from Bijapur district of the state, including a teenage girl, had filed the complaint against security forces.

In January 2015, thirteen instances of gang rape were reported by the women of Bellamnendra village in Bijapur district. A report by an independent collective, Women Against Sexual Violence and State Repression, on the Bellamnendra rapes reads:

“All rapes were gang rapes with many of the rapes happening simultaneously. At least four to five groups of men at different homes committed rapes. One would keep watch, some would pin down the woman and another would rape her. Some rapes took place when the women pleaded with the forces not to take their poultry and rations. Older women tried to help women who had been raped, sometimes even confronting the security forces, but even these women were targeted. In one case a mother and her daughter were raped in the same room.”

Given the brutality of this crime and the pressure by civil society groups, FIRs (First Information Reports) were filed in these cases against ‘unknown armed personnel’. However, the investigations have not progressed much since.

It is very difficult to ascertain the total number of women who have been sexually violated in Bastar for various reasons: police do not generally file FIRs, victims rarely report such crimes owing to taboos, and many villages are not easily accessible. Most women are routinely disrobed, molested, beaten and subjected to verbal abuse. They don’t see the value in trying to lodge such complaints. Civil society takes notice and tries to protest only if rape is heinous. “Sadly, for people outside to take rape in Bastar seriously, it needs to be inhuman. Brutal,” said tribal leader Soni Sori.

A report by, Women Against Sexual Violence and State Repression (WSS), which conducted an independent fact finding mission in the region, said:

“Sexual Violence in Chhattisgarh is reaching alarming levels. The combing operations of the security forces inevitably involve large scale sexual violence against adivasi (tribal) women. The police on the other hand refuse to file even an FIR, thus all the energy of women is directed into getting their complaints heard. The purpose of sexual violence then is not just to humiliate, but also display physical control over the body of the subjugated by male security forces.”

The majority of those living in Bastar are tribal peoples. Seventy years ago, on the 15th of August, India ceased to be a British colony. However, many have questioned if all the citizens of this vast and diverse democracy have enjoyed the fruits of independence. Indigenous people of India certainly cannot claim to have benefited a lot from the freedom. Minerals, forests and land that they inhabit are being taken away for industrial purposes without their consent. In turn, they are subjected to physical abuse and torture.

A tribal woman in Bastar who spoke about large-scale sexual atrocity by the security forces in her village, Dornapal. Credit: Raksha Kumar

Following the rape and murder of 23-year-old Madam Hidme by security forces in July last year, the people of Bastar decided to draw attention to this point. About a hundred tribals and non-tribal people walked 180 kilometres to Gompad, Hidme’s village, and hoisted India’s national flag six days later on Indian Independence day.

In May last year, about three dozen women made the treacherous journey on foot, in tractors and by bus from their village in Korcholi to the district headquarters of Bijapur to file complaints. But the police refused.

One of these women – we will call her ‘Mangli’ – said she was raped by three security men. She was initially reluctant to file a complaint. “I am scared for my husband’s life. If I file a complaint, they might come and attack us,” she said. Later however, egged on by activists and other villagers, she decided to approach the Superintendent of Police of Bijapur to narrate the traumatic incident. The officer asked her if she had any proof that supports her claim. He made her wait for three hours in the police station before he returned to say that he could not file the complaint.

Section 154 of the Indian criminal law makes it mandatory for a police officer to file a First Information Report upon receipt of any information of a cognizable offence such as rape. However the police told many villagers that they would need to conduct preliminary investigation before filing a report. “This is also in violation of the law as no preliminary inquiry is permissible in such cases,” said Shalini Gera, a human rights lawyer practising in the region. “By refusing to file an FIR, the police can be held culpable,” she added.

However, those that raise pertinent questions about the police usually also find themselves under threat. For example, journalist Malini Subramanium, activist Bela Bhatia and lawyers Shalini Gera and Isha Khandelwal have all been forced to leave the region.

Despite the damage it has done, the militarization of Bastar is only intensifying. In the past three years, paramilitary forces have almost doubled their presence in southern part of Bastar. There is now one armed personnel for every 16 civilians. As Somi Hidme, a 34-year-old resident of Sukhma district (no relation to Madam Hidme) asked: “They rape our women and walk away to receive medals from the government for bravery. Why is this irony lost on everybody?”