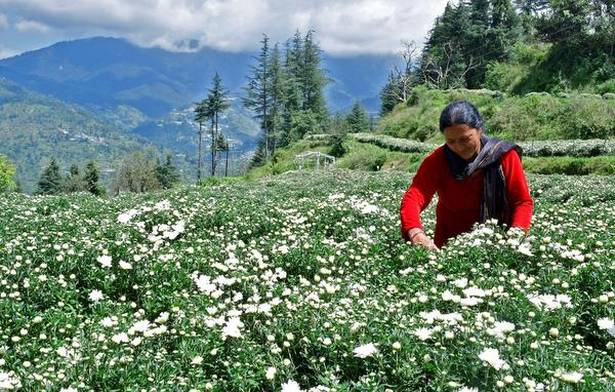 By Raksha KumarOctober 6, 2018 No Comments

Bhuira’s women are coping with the higher workload by creating vastly more flexible family and community structures. And they are simultaneously pushing towards modernity much faster than their neighbours. 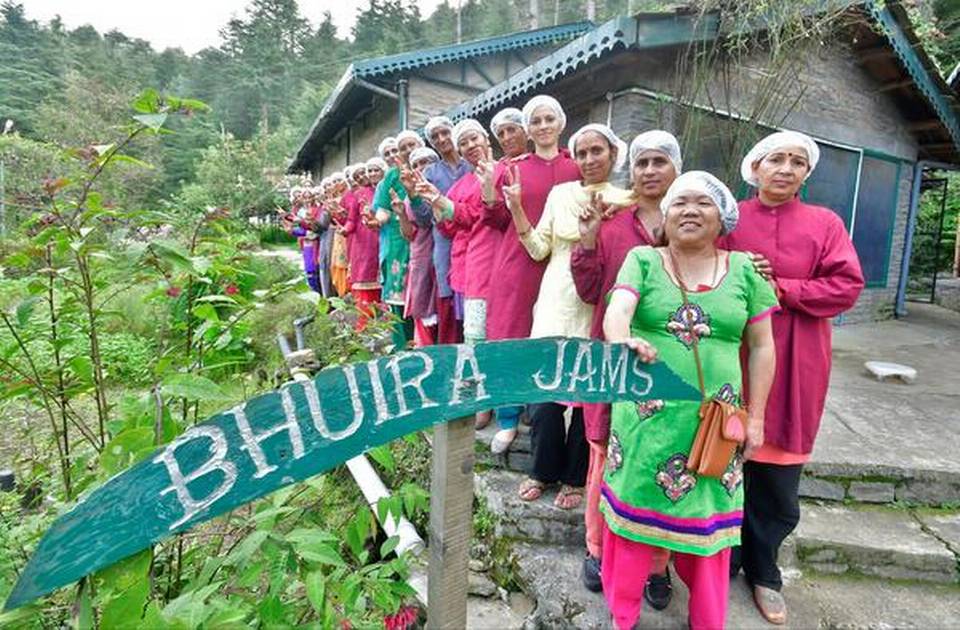 Everyone in the village sneaks a glance when Upasana Kumari drives her White Maruti 800 to work. “Driving a car is intoxicating,” says Kumari. A winding, muddy, single lane road that starts from the edge of the hillock where Kumari’s house is, passes in front of the jam factory, approximately 4 km away.

For the 15 minutes that she drives, Kumari confesses that she feels like a woman with wings. Free to fly away.

Kumari is 27 years old has a bachelor’s degree in Information Technology from a college in Rajgarh, the closest town, as well as a long-distance diploma in IT services. She works at the Bhuira Jam Factory as an office administrator.

The factory looms large in the lives of Bhuira’s women. Located in Sirmaur district on the border of Himachal Pradesh and Uttarakhand, the sparsely populated Bhuira village has no more than 135 families on its 980 acres.

Out in the field at Bhuira village. Photo: Akhilesh Kumar

Each hillock has just one or two houses. They are surrounded by fruit trees and flowering plants that grow on shallow terraces carved out to limit soil erosion during untimely rains and landslides. Less than 300 women live in the village. And as in other parts of the country, women in Bhuira too shoulder most of the emotional and household labour in their family, which goes largely unaccounted.

On the warm September evening I am in Bhuira, 11 members of Kumari’s family are celebrating their patriarch’s birthday with home-made cake. Immediately after returning from eight hours of work at the factory, Kumari makes sugary tea to wash down the cake. “I made the cake too, before I left for work,” she smiles.

Kumari has a three-year-old child, works hard at the factory, and cares for her parents-in-law. It’s a lot to do. Better education has meant more jobs, but it has also meant that Bhuira’s women have to be ‘superwomen’ who do it all.

Interestingly, though, a social change is also germinating in Bhuira. The women are coping with the higher workload by creating vastly more flexible family and community structures. And they are simultaneously pushing towards modernity much faster than their neighbours. Their lives hold interesting lessons for the rest of the country.

A 2015 World Bank Group study titled ‘Scaling the Heights: Social Inclusion and Sustainable Development in Himachal Pradesh’ reads: “We are often asked: ‘what does social inclusion and sustainable development look like?’ While the question really doesn’t have a clear answer, because it is so context-specific, we use Himachal Pradesh as something of a benchmark.”

Social inclusion is impossible without female literacy and employment. In Bhuira, female literacy rate has gone up by 11% in the past decade as opposed to a 3% increase in male literacy. Higher literacy rates mean greater employment opportunities outside the household. To compensate for this, work within the house is shared by the other women in the family.

Take, for instance, Vidya Tomar, the anganwadi teacher at Bhuira. A B.A. degree got Tomar the anganwadi job 11 years ago. She still has to cook breakfast and lunch, but the other household chores are handled by her stay-at-home sister-in-law.

In many villages of Himachal Pradesh, water still needs to be carried uphill in buckets, cows and buffaloes have to be taken for grazing to the higher slopes, and vegetables fetched from fields many hillocks away. “Maintaining a household is a full-time job,” says Tomar. “When we cook, we cook for not less than 10 people.”

Tomar’s family encouraged her to take a job when she got her degree, and compensated by taking on some of her household burden. “If my sister-in-law did not manage the work at home, I could not be out here with the security of a government job,” she says, as she prepares the children at the anganwadi to pose for a picture. She is grateful that her sons are being brought up by her sister-in-law.

According to Kumari, this is how Bhuira differs from cities. “We are employed because there is someone at home,” she says. “We help each other with the household chores.”

The effects of female employment on gender equality now appear to be trickling down to the next generation. Tomar’s two sons help their aunt before going to school in the morning. At 13 and 16, they are put to task to tending the cattle, cooking and cleaning.

Unlike other parts of Himachal Pradesh, Sirmaur, located in its southern reaches, is not driven solely by tourism. Since the local population does not have to constantly cater to the demands of increasing numbers of people from metropolises, they chart their own paths towards development and modernity.

Until 20 years ago, Bhuira was as obscure as any Himachali village. In 1999, a British woman, Linnet Mushran, decided to make and sell jams from the fruit grown locally. Today, Bhuira Jam Factory produces up to 250 tonnes of jams and preserves a year, employing only local women. There are 10 permanent employees, and up to 100 women are employed during peak season when production increases.

Being part of a women-only enterprise changes the perspective of the village women significantly. “We understand each other’s problems well,” says Sarita Devi, who has worked at the factory since its founding.

From their salaries, the women contribute to a fund every month. Anyone in need of urgent finances can withdraw from it at a small interest. “It’s our own chit fund,” says Sarita Devi. 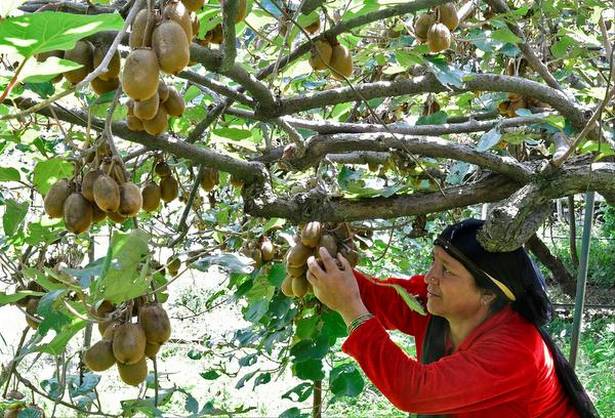 The jams are sold to high-profile brands such as Fabindia, Devans, a popular coffee shop in Delhi’s posh Khan Market, and L’Opera, a French patisserie. In many ways, the jam factory can be credited with ushering in modernity into an otherwise quaint village. The jams themselves are made in the old-fashioned, labour-intensive way, with minimal use of machinery. Sorting the fruit, washing, cutting and cooking is done by hand.

The preserves are checked for quality and sealed in glass bottles. Photo: Akhilesh Kumar

Since agriculture is still the mainstay of this largely rural economy, small industries like the jam factory, which integrate farm produce into the economic chain, work well. All the fruits used for the jams are bought from local farmers; only certain citrus fruits are bought from outside.

Floriculture is also one of the occupations. Photo: Akhilesh Kumar

Sirmaur, boosted as it is by floriculture and fruit production, has better human development indices, a better sex ratio, and higher income levels. It contrasts with districts like Chamba, in northern Himachal, which falls in the ‘most backward districts’ list.

Districts like Sirmaur are responsible for the high rank Himachal Pradesh enjoys in government and non-government assessments like the 2011 Indian Human Development Report which ranked the State third after Kerala and Delhi.

“In 2011–12, about 63% of rural women in Himachal Pradesh reported themselves as employed,” reads the World Bank Study Report. “This places Himachal Pradesh second in female labour force participation in the country, after Sikkim, and significantly above the all-India average of 27%.” 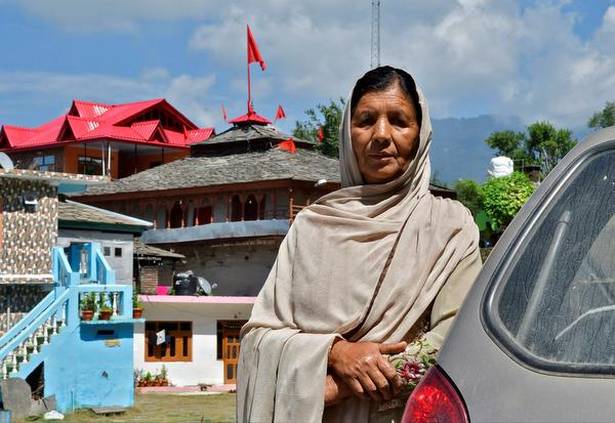 Kamla Devi is the head of the village council. As Pradhan, she oversees five villages, including Bhuira. “In my younger days, I could not have imagined that a woman would be Pradhan,” says Kamla Devi. Three years ago, when Kamla Devi, a widow, won the Panchayat elections, Bhuira was reserved for female candidates.

However, the next time, she hopes to win even if Bhuira is not a reserved constituency. “People recognise that women are better administrators. We approach our work with a degree of sensitivity that men don’t,” she says.

Kamla Devi oversees several government programmes in the five villages she runs. And these seem to be working well in Bhuira and neighbouring villages. Whether such programmes ensured higher female employment rates or whether literate women demanded such programmes is uncertain for now.

One programme trains teenage girls in handicrafts and tailoring. Every day at 11 a.m., several such girls in navy blue salwar kameez hurry to the Panchayat Bhawan in Bhuira. Giggling and excited, they pull out portable sewing machines and begin sewing. “We made our own kurtas last month,” says 17-year-old Payal Kumari. “A qualified teacher comes to teach the girls, who are enthusiastic to learn. We have all the supplies such as a sewing machine, threads and the like,” says Kamla Devi.

The Panchayat building shares a wall with the only primary school of Bhuira. Sitting in rows chanting the multiplication tables, students keep glancing at a large clock on the wall. It will be lunchtime soon.

When the children run out, through the playground and towards a hall where lunch is served, Sarita Devi smiles with satisfaction. “See! There are more skirts than pants,” she says. Sarita Devi managed to study till Class XII before she was married into a Bhuira family. With no avenues for higher studies, she signed up for a distance learning programme in computer studies from Karnataka University. “I love to study,” she says.

Sarita’s 22-year-old daughter had to drop out of school after Class XII because she had a hearing problem. Now, she learns sewing at the Panchayat. Is Sarita Devi worrying about her daughter’s marriage yet? No, she smiles. “She might like someone, why should I dictate terms in her life.”

Upasana Kumari talks about how she wants to raise her son responsibly, paying attention to how he behaves with girls and imbibing in him a sense of gender equality.

Ranjita Punder lives in Bhuira and takes a bus from the village to the factory. Like the other women of Bhuira, her thinking too has evolved dramatically. “I began my silent revolution towards gender equality 14 years ago,” she says.

Two rickety buses ply the snake-like mountain road connecting Bhuira village to Rajgarh town. One at 8 a.m. and another at 5 p.m. From Monday to Saturday, Punder gets off the bus at 8 a.m. in front of the jam factory where she has worked for the past 14 years.

“I used to work here before my husband succumbed to cancer. And I continue to work here,” she says. Unlike Kumari, Punder’s earning from the factory contributes largely to running her household. Her two sons and brother-in-law are the men in her family. “They share the burden of domestic labour.”

“When women earn, men should do the household chores,” says Punder. “This ensures that balance is maintained.” In a tiny corner of Himachal Pradesh, the old rules are being rewritten.

Published in: The Hindu
Published on: October 6, 2018
Link: https://www.thehindu.com/society/it-takes-a-village/article25143392.ece