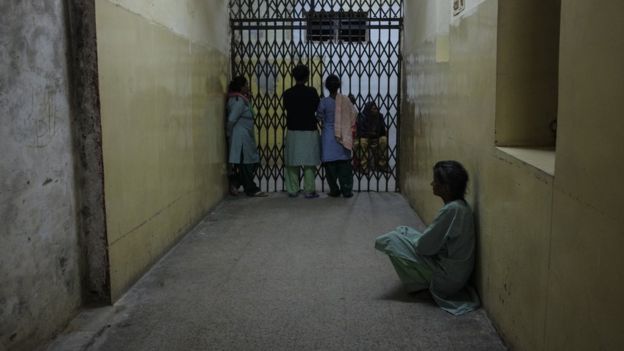 Mental illness is often neglected in India because of stigma and poor care. But women are the worst affected and are mostly abandoned by their families. 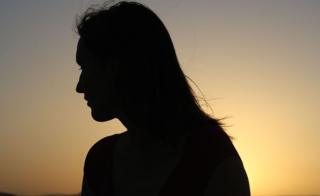 Nearly 14% of Indians are mentally ill and at least 10% of those need immediate intervention.

Ramaa (whose name was changed upon request) turned 45 on 20 August 2018. Her birthday is one of the few details she remembers from what she calls “her past life” – when she lived with her husband and two sons in the western city of Mumbai.

“When people say they love their families and cannot live away from them, I just don’t understand it,” she says. Her marriage, she explains, was tumultuous and her sons were not very affectionate towards her.

A few days before she turned 30, Ramaa’s husband brought her to the Regional Mental Hospital in Thane, a suburb of Mumbai. She was diagnosed with bipolar affective disorder, a condition that causes extreme mood swings.

“He said he would return with medicines for me. He never did,” Ramaa recounts in a flat voice.

According to mental health professionals in India, it’s common for women to be abandoned if diagnosed with a mental illness.

Nearly 14% of Indians are mentally ill and at least 10% of those need immediate intervention, according to a study published in 2016 by the National Institute of Mental Health and Neuroscience (Nimhans). And in 2017, the WHO estimated that 20% of Indians may suffer from depression at some point in their lives.

But few reach out for professional help or care because of widespread social stigma and poor access to mental healthcare. 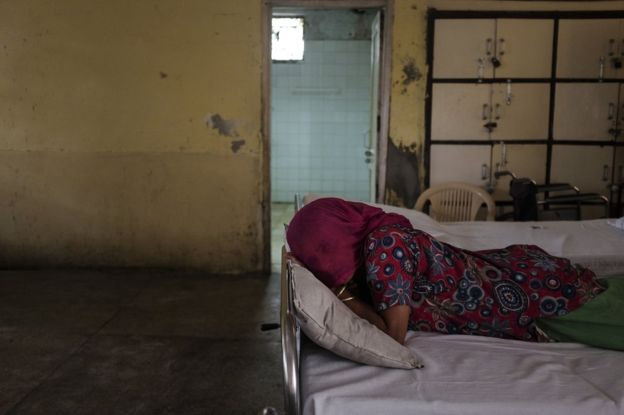 A young woman who developed psychotic symptoms after being gangraped is seen lying facedown on a bed in award at a mental health facility in Delhi. She was thrown out of her parent’s home after she was diagnosed. Image copyright: Cheena Kapoor

“If the patient is a man, a mother, a wife or a sister is usually there to care for him,” says Reni Thomas, a researcher who has studied women’s mental health in India. “Many mentally ill women are (seen as being) not of any use to the household. On the contrary, they become a burden on their families.”

“Families are not necessarily always villains in this story,” says Dr KV Kishore Kumar, who heads a non-profit which works with abandoned women diagnosed with mental illness.

“The state has failed the family and, therefore, the families have failed their women,” he adds. Family support, according to Dr Kumar, will only increase if there is better housing, employment opportunities and readily accessible mental health facilities.

Ramaa, for instance, lived in a slum in Mumbai and worked as a domestic help in nearby homes. Every time she made a trip to the hospital, she had to forego half a day’s salary. The cost of the commute came from her meagre savings.

According to a 2016 report by the National Commission for Women, families that wilfully abandon mentally ill women do so mainly because of social stigma. Other reasons include a lack of space in the house, the old age of caregivers or because they fear for the safety of the women themselves.

“Most of these factors are gender specific,” says Ms Thomas. “Very few men are left to live in a shelter home because his parents fear for his safety in their homes or because of a lack of space.”

Ramaa, who at one point lived in a shelter home in the southern city of Bangalore, says she doesn’t know how she got there. The city has only two state-funded shelter homes for women that together can officially accommodate about 220 women. But as of August 2018, they collectively housed about 300 inmates.

While these are designed to house homeless women, some of whom have jobs, the shelters have also become a refuge for those who have been diagnosed with mental illness. But the supervisors at these facilities are not trained to care for or treat mentally ill women.

“Mentally ill women in these shelters are made to live in the same facility as those without any mental illness,” says Febna Moorkath, a researcher at Nimhans.

In Dr Kumar’s estimation, 40% of the patients voluntarily come for treatment. The others, he says, are brought in by the police when they are found wandering on the streets “if they have reason to believe they are ‘dangerous’ to themselves or others, or incapable of taking care of themselves.”

In such cases as well, the police mostly bring in women or young girls – the commonly held belief is that a man can care for himself or, at least, won’t be at risk on the streets.

“But it’s assumed that a woman needs protection and (she) is sometimes forcefully brought into a shelter home” says Ms Thomas. “The sad part is, that perception is true in some cases.”

India passed the Mental Healthcare Act in 2017, which permits involuntary institutionalisation under specific circumstances, like if the person in question could potentially hurt themselves or others.

But, according to Dr Pratima Murthy of Nimhans, such a provision can work against women. “Often women come here on their own, along with their families. But they do not want to stay at our in-patient facility voluntarily.”

She adds that many of the female patients in the wards live by themselves and care for themselves. “We see that with such patients there is a severe loss of purpose. Who should they get better for?”

With sustained medication and care, many women do recover. But even if they recover, they are often not confident enough to step out into the world. Nimhans then has no option but to move them to a government-owned or private shelter home if their family does not return for them. And some of them cannot leave these homes because they have no money and no family.‘

Ramaa recalls the time when she felt better and wanted to leave her shelter home. But in order to do so she needed to be close to a health facility which would provide the medicines she needed.

“I finally made up my mind and went with a friend to a garment factory in Bangalore,” said Ramaa. “The next day I had a job!”

In that moment, Ramaa says, she decided that this was her “second life”. She now works 10 hours a day, rents a one-room apartment and earns enough to sustain herself. When has some extra money, she buys and distributes chocolates to children in the neighbourhood.

“I want to believe that my sons would have come to look for me if my husband had allowed them,” she says. “I have nothing against them.”

The reporting for this story was supported by the International Women’s Media Reporting Grants for Women’s Stories.