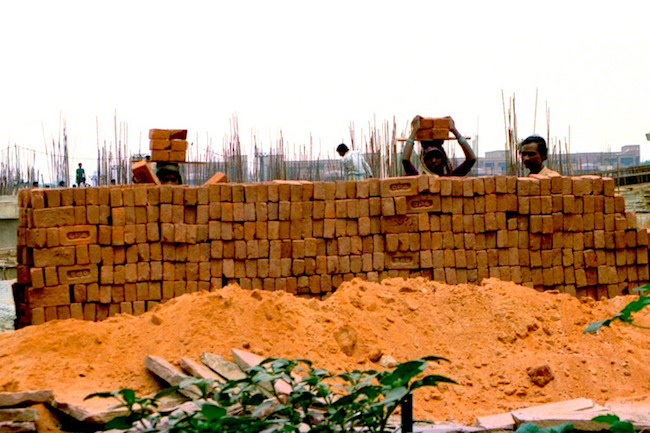 Trafficking is not just for sex work: A hard look at India’s forced labour problem

By Raksha KumarSeptember 16, 2017 No Comments

There are many myths about trafficking, and one of them is that women and girls are mainly trafficked for sex. The truth though is more banal and sinister.

Human trafficking conjures up images of women being smuggled out of their deprived villages, only to land up in exploitative brothels. From bad situations to worse conditions, goes the narrative.

Lawmakers of the country focus largely on trafficking for forced sex work. The anti-trafficking discourse amongst activists has also revolved around what is being termed as “sex-work exceptionalism.” And the media, too, is unduly obsessed with stories around sex trafficking and disseminates them with some zest.

While it is not wrong in all instances, most Indian women who are trafficked within the country do not end up in forced sex work. In fact, many of them are found lifting sand and bricks in the scorching heat, or working relentlessly for several hours every day as domestic help.

But, the proposed law on trafficking still remains patronising towards trafficked people, and still, heavily tilted toward addressing sex trafficking.

Why? Dr Prabha Kotiswaran, a Senior Lecturer in Law at King’s College London, believes it is because labour trafficking requires tackling complex industrial structures and addressing economic imbalance between regions. These, she said, are tougher than invoking morals and using an abolitionist approach towards sex trafficking.

Exactly how large is the problem of trafficking for exploitative labour?

The report goes on to say that “within India, some are subjected to forced labor in sectors such as construction, steel, and textile industries; wire manufacturing for underground cables; biscuit factories; pickling; floriculture; fish farms; and ship breaking. Thousands of unregulated work placement agencies reportedly lure adults and children under false promises of employment for sex trafficking or forced labor, including domestic servitude.”

About 18.3 million people fall in that bracket, according to Walk Free Foundation’s 2016 Global Slavery Index. That’s as many people as currently residing in the city of Mumbai.

The 2016 anti Human Trafficking Bill has a skewed focus on “rehabilitation” of trafficked persons. However, labour trafficking has causes rooted in economic inequality, caste differences and lack of information on safe migration. Rehabilitation is not as simple as sending someone back home, said Kotiswaran. 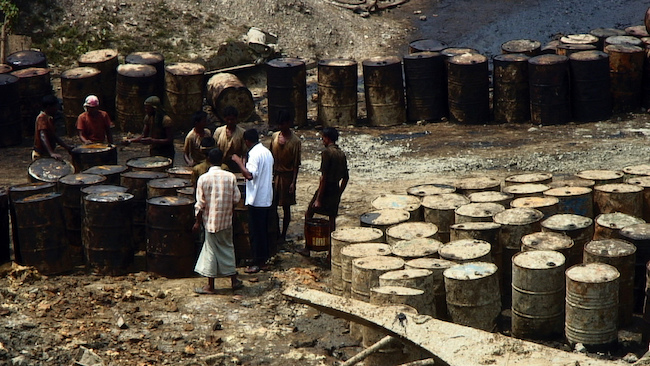 Voluntary migration is not merely a human trait, but is imperative for the development of economies as well. However, the problem arises when the migration is either forced due to economic reasons (such as poverty, underdevelopment, failure of healthcare etc) or for non-economic reasons (treachery, cheating etc). And sometimes, the lines are blurred.

Take for instance the story of 27-year-old Shabana* from Assam.

Shabana fled an abusive marriage in Assam and boarded a train to Delhi. She had just one suitcase and her four year old daughter with her. Soon after landing in Delhi, she realised that people would give her domestic work, unless she had someone to vouch for her. “I only knew my neighbour from back home in Assam. And he refused to guarantee potential employers of my honesty,” she said.

She approached a placement agency. “They promised me Rs 50,000. It was unbelievable! How could anyone offer me such a huge amount of money!” she said.

What she didn’t know was that the sum of money was for a period of two years. Her only problem: who would care for her child? She dropped off her daughter at an orphanage in Delhi and promised to visit her every weekend.

But that was not to be. The agency found her a job in Bengaluru. She was asked to board a train, which she did. “I would have said no to the job, if they had told me I will be 3000 kilometres away from my daughter,” she said. Shabana had no idea where she was headed when she stepped into the train. She cannot get out of her contract now. The agency abuses her every time she asks to go back to Delhi.

She speaks to her daughter on the phone and has even visited her twice. “I dream of seeing my daughter all the time. She is the only reason I am living,” said Shabana. She said she had been paid Rs 10,000 in a year of her being with the family in Bengaluru.

Incidents like Shabana’s are very common. Sitting in her basement office in Bengaluru, activist Geeta Menon is flooded with phone calls from women complaining of abuse and trafficking. “Our organisation alone handles at least four such cases a week,” she said.

It’s important to understand in Shabana’s case that while it is her constitutional right to migrate and seek employment elsewhere in the country, the minute her consent is overridden, it is considered trafficking. 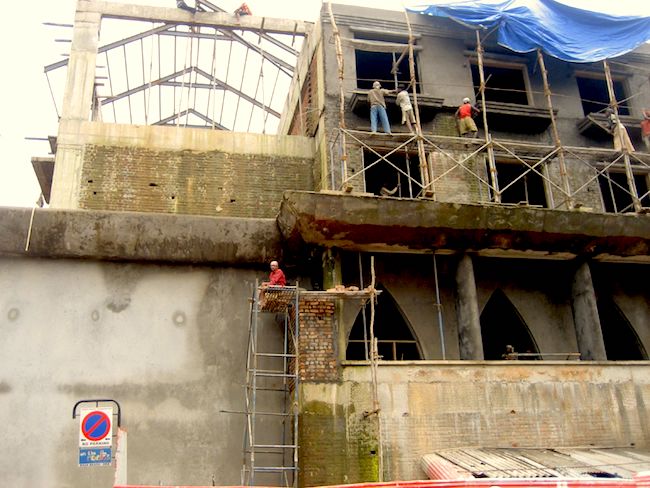 During our interactions with trafficked people, it was observed that a person can be trafficked at various stages of migration. What was initially voluntary migration could later turn into trafficking. This makes it tougher for law enforcement agencies to counter trafficking.

In Santosh’s* case, he was trafficked when he was 22, even though he left home at the age of 14.

At 14, Santosh ran away from his home in Jalhalli village of Raichur district. He found himself sleeping on railway platforms in Bengaluru for a few weeks before he managed to find a job at a wire-making factory near Tumkur. “All the while, I had the satisfaction that I had done what I had wanted to. Even if it meant I went through hell,” he said.

However, when he was 22, he met Shankrappa, who promised him “a decent job” in Bengaluru. 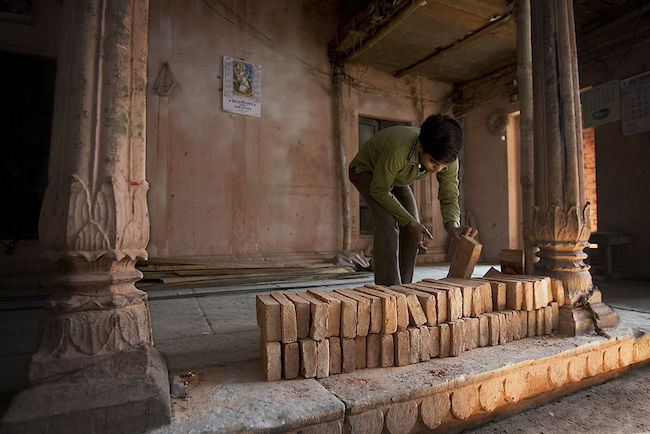 By Jorge Royan, via Wikimedia Commons

Once in Bengaluru, Santosh claims he was made to live with thugs. “They asked me to rough up a small store-owner or beat up a college-going boy,” he said. Santosh realised that he had been ‘sold’ to the gang. But, he says, despite his years of living on the streets, he could never muster courage to rough someone up. “I was bullied, all the time,” he said. By ‘bullied’, Santosh means he was raped several times by the thugs in the two years that he was with them. Careful not to mention who these thugs were, Santosh says, “Suffice to say these are thugs that the politicians hire,” said Santosh.

Trafficked persons do not always need rehabilitation in the way the law defines it, says Geeta Menon, founder, Stree Jagruti Samiti. “Some people might need new jobs, some might just need to be in safer spaces and certain others might be minors who would need to go home,” she says. But, the law tends to paint everyone with the same brush, she adds. 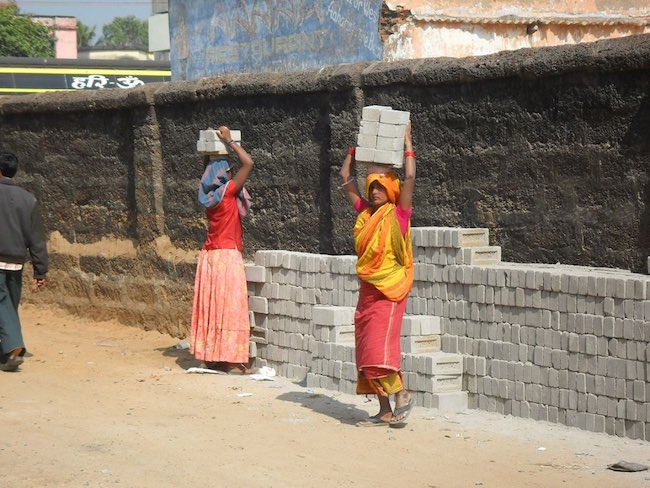 By Milei.vencel (Own work) [GFDL or CC BY-SA 3.0], via Wikimedia Commons

Government efforts to tackle trafficking overlooks another crucial point: Most people who end up in exploitative labour conditions are from so called lower castes. But there are no targeted efforts to stop the trafficking of Dalits and other disadvantaged people.

The US Department of State report says, “The majority of India’s trafficking problem is internal and lowest caste Dalits, members of tribal communities, religious minorities, and women and girls from excluded groups—are most vulnerable.”

In many villages we visited, Dalits and other lower caste people who were either landless labourers, daily wage earners or scavengers were trafficked.

According to Menon, aspiration is a main motivator for those who move – a better job, more money, better social standing. And therefore, traffickers take advantage of the lure of a better living coupled with caste-vulnerability.

“If you are comfortable in your social and economic position, why would you want to migrate? And if you don’t show any intention to migrate, then you are not prey to traffickers,” explains Sharada*, 23-year-old woman from Akividu village of West Godavari District.

Sharada was talking about upper caste people in her village who are self sufficient and have a social status. “Even if they want to migrate, they know where to go and who to go with,” she says. “They are better educated and connected”

Sharada was trafficked a year ago and found herself in Kolkata. She was “rescued” and sent back to her parents’ house in the village. “There were many women from Andhra in Kolkata, in placement agencies, in brothels etc. But, they were either Golla, Katipapala or Gosai or some such.”

In the case of domestic labour, Sharada explains that if you worked in the houses of people who were of the same caste, they would help more. “No one ever sees a Kamma or a Brahmin amidst us,” she says. “But, if there is a one-off chance that a Kamma works in a Kamma house, that person is paid better and given better facilities,” she says. 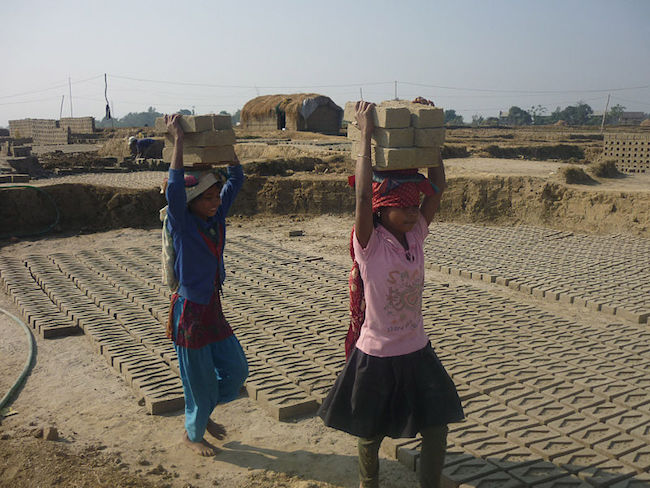 By Shresthakedar (Own work) [CC BY-SA 4.0], via Wikimedia Commons

How children are trafficked

The situation is not drastically different for children. Since most traffickers are known to the families, a man from a particular caste ends up trafficking children from the same caste.

The National Crime Records Bureau figures showed a 27% rise in the number of trafficked children in 2016 when compared to the previous year. But, there is no data to show the caste of those trafficked.

A year ago, a man approached a couple who work on agricultural lands in Vijayawada district. He had a tempting proposal for them. He told them they could send their teenage daughters to work in a brick kiln and they will earn as much money as the parents, or may be even more.

The following week, Lakshmi* and Bhagya*, ages 17 and 16, were sent away with the man to Kondapur, Rangareddy district of Telangana. While the parents’ names were enlisted as employees to flout the child labour law, the girls do all the work.

“Our parents are technically employees here, not us,” say Lakshmi and Bhagya. They work for about six hours everyday and stopped going to schools when they began menstruating. “Since our parents are recruited here, they get the pay. Not us,” says Bhagya.

Like most other children who work there, the girls are petrified to venture out to the town square. They say they would be ‘punished’ if they were caught speaking to strangers. “We do not like it here. But, working here is our only way to make a better living in the future,” says Bhagya.

Published in: The News Minute
Published on: 16 September, 2017
Link: https://www.thenewsminute.com/article/trafficking-not-just-sex-work-hard-look-india-s-forced-labour-problem-68499