‘We know what Naxals are like. She is not one of them’: Support for researcher Bela Bhatia in Bastar

Last week, a mob in Chhattisgarh’s Parpa village had shouted slogans against the social scientist, accusing her of working for the Maoists.

It was just another day in the sleepy village of Parpa, eight kilometres south of Jagdalpur in Chhattisgarh’s southern region of Bastar. But that was only until around 4 pm on March 24 when four jeeps, five autos and a pick-up truck drove into the village with nearly 100 people. They were carrying banners which said, “Naxal samarthak Bastar chhodo” (Naxal supporter, leave Bastar). The men and women shouted “Bela Bhatia murdabad.” Down with Bela Bhatia.

Bhatia is a reputed social scientist with a PhD from Cambridge University in the UK. She has been an honorary professor at the Tata Institute for Social Sciences, Mumbai, and has served on a central government panel to look at governance challenges in areas facing Left-wing extremism.

The 53-year-old researcher has been living in Parpa for the past four months. Before she moved to the village, she spent more than a year in the town of Jagdalpur.

When the protesters came to the village, Bhatia was in Jagdalpur. They distributed bundles of yellow, blue and green leaflets which said: “Janiya aapke beech mein rahne waali Naxali dalal Bela Bhatia ko.” Know the Naxal broker Bela Bhatia who is living amidst you.

Why are some people agitated about the presence of Bhatia? What does she do that makes them think of her as a Naxal supporter?

Last November, Bhatia and a few other activists travelled to interior villages in Bijapur district of Chhattisgarh to investigate allegations that security forces had raped adivasi women. The activists recorded the testimonies of several women, which became the basis of a first information report. The police investigation of the alleged rapes is underway.

A month after the case was registered, Bhatia’s landlord, a tailor who had a contract to sew uniforms for the Central Reserve Police Force, asked her to vacate the Jagdalpur house. The reason he cited was that her dog was noisy. Bhatia moved out, even though she was intrigued at the reason, since, until that point, the landlady used to feed her dog and take care of it when Bhatia was away in the villages. Bhatia moved to Parpa village.

Then, in January this year, she travelled to Bijapur district headquarters only to find a few hundred people had gathered to shout slogans against her. “Bastar chhodo, Bastar chhodo, Bela Bhatia Bastar chhodo,” they said. Leave Bastar, Bela Bhatia. The group later identified itself as Naxal Peedit Sangharsh Samiti, or the Committee of Naxal Victims.

“Some people are actual victims of Maoist violence, and their case needs to be heard too,” said Bhatia when asked about the protest. However, they cannot incite people to violence, she added. She clarified that she is against violence of any kind, whether by the state or by the Maoists.

But it is probably easier to oppose state violence because it has set parameters, she admitted. “The state has some rules to follow and if they overstep it, human rights defenders jump in,” she said. While one can condemn Maoist violence, there are no redressal systems in place to fight against them, she explained.

“We live in a polarised society,” said Bhatia. “If you constantly oppose one camp, you are automatically assumed to be from the other.”

The only way to end the polarisation of viewpoints, according to Bhatia, is to engage in a dialogue with those differing from her. “I believe in democratic dissent,” she said. “I believe that they have as much claim to their thought as I do. We should sort this out through dialogue.”

Faced with a mob outside her home, however, Bhatia was forced to complain to the district collector, who assured her that the matter would be investigated. Said Amit Kataria, the Collector of Bastar district, “I have personally pulled up the troublemakers to ensure this won’t happen again.”

In the past, though, assurances by the district administration have amounted to little. The protest against Bela was preceded by similar protests last month against lawyers Shalini Gera and Isha Khandewal, and Scroll.in contributor Malini Subramaniam. A mob shouted slogans against Subramaniam, followed by stones being hurled at her house. Pamphlets were distributed calling Gera a Naxal. Eventually, the lawyers and the journalist were forced to leave Jagdalpur.

Support on the ground

The group that has led the protest against Bhatia and others in Jagdalpur is called Samajik Ekta Manch. It claims to speak on behalf of the people of Bastar, but even within the town, it is evident that not everyone shares its view.

In the neighbourhood where the lawyers of the Jagdalpur Legal Aid Group, or JagLag, lived, several people defended them. “We know for a fact that JagLag was becoming uncomfortable to the administration and therefore was shunted out,” said an auto-rickshaw driver who lives in the area. “We don’t buy that they were Naxal sympathisers.”

The owner of a general store near Bhatia’s old residence in Jagdalpur said that she was a quiet lady who did her own work and didn’t meddle in other people’s business. “She always bought bread for her dog from me,” he said, adding that he would be shocked if she supported anything violent. 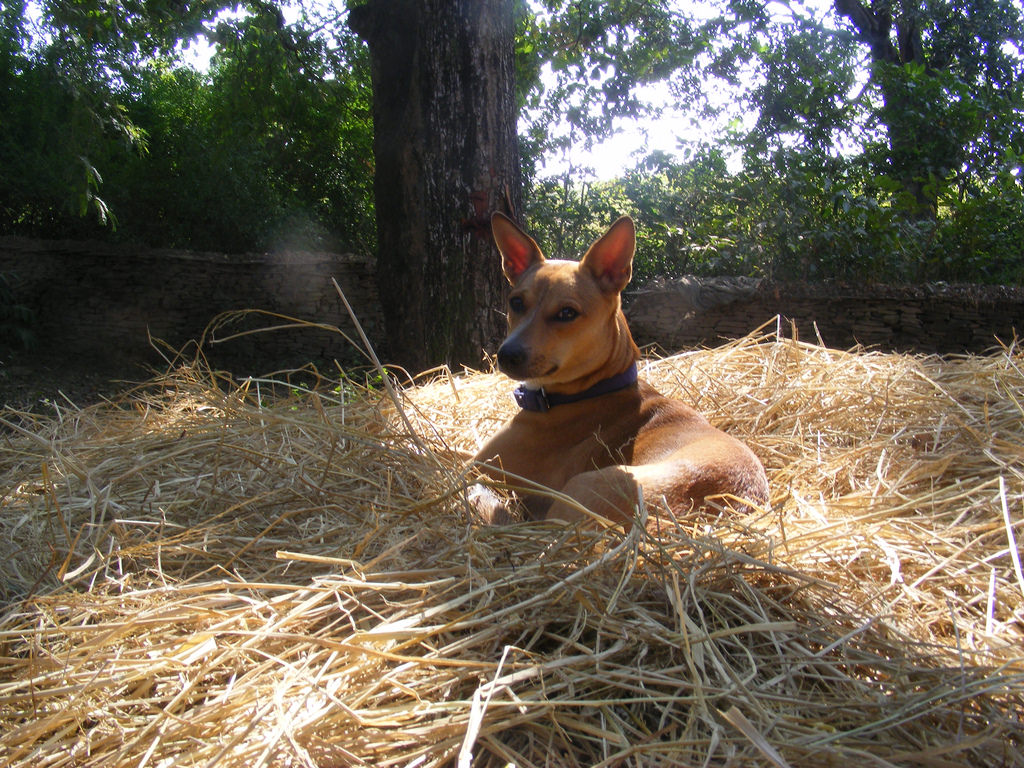 Somari, Bela Bhatia’s dog sitting on a haystack in the backyard of her home in Parpa.

According to Samajik Ekta Manch’s Subba Rao, 90% of the protestors who shouted slogans against Bhatia were from Parpa village. “The village doesn’t want her,” he claimed.

But in the village, people identified the mob as outsiders. The protesters asked Bhatia’s landlady why a Naxalite “aatankwadi” (terrorist) had been allowed to rent a room there, and advised her to evict Bhatia. The landlady, however, stood her ground.

“When I returned from Jagdalpur, my landlady, a gentle Gondi woman who speaks in Halbi like other Gonds in this village, related what had happened,” recalled Bhatia. “She said, ‘They said you are a Naxalite. I told them that you bought your own rice and dal and cooked yourself. You lived quietly. There were only books and papers in your room. How could you be a Naxalite?'”

The protestors also spoke to other villagers. But the leaflets and discussions seem to have had limited impact on the people of Parpa.A single storied block of a house stands close to the village road. There are paddy fields on one side and tamarind and mango trees on the other. A hand-pump, the main source of drinking water for the village, stands in front of it. Women line-up regularly in front of that house to fetch water. When asked about Bhatia, a woman at the handpump said, “We were worried for her. We know what Naxals are like. She is not one of them.”