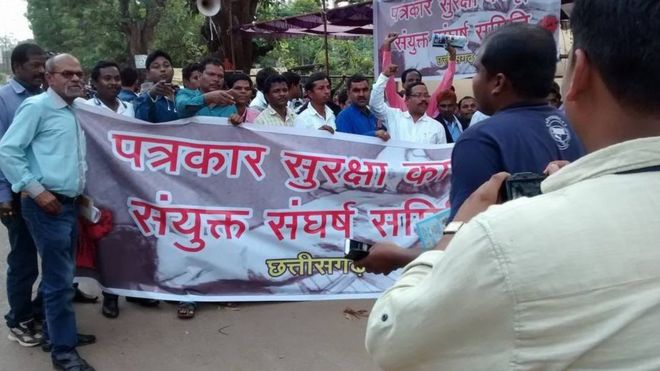 Why journalists are leaving India’s Chhattisgarh

Journalists are concerned over the arrest of their colleagues in Chhattisgarh

About 50 journalists from the central Indian state of Chhattisgarh recently gathered in Delhi to demand an end to intimidation at the hands of the authorities, and urged the government to provide a conducive environment for independent reportage.

Since July 2015, at least four journalists have been arrested, two others left the state and many more continue to face harassment daily.

“The large number of journalists who have quit their profession in the past six months is probably unprecedented and that shows how grave the fear is,” said Kamal Shukla, president of Patrakaar Suraksha Kanoon Sanyukt Sangarsh Samiti, a group fighting to bring a law to protect journalists in the state.

The Chhattisgarh government on 20 May announced the formation of a high-level committee, consisting of journalists and civil servants, to investigate the arrests.

Even though this move seems like a successful culmination of their protest, journalists say they will wait to see the working of this committee before rejoicing.

Why are journalists facing threats?

The mineral-rich state of Chhattisgarh has witnessed an armed conflict for more than three decades. While the government encourages mineral extraction industries in the area, an armed left-wing rebel guerrilla group, called the Maoists, opposes it.

The rebels say they are fighting for the rights of indigenous tribespeople and the rural poor who, they say, have been neglected by governments for decades.

The southern Bastar region of the state is the epicentre of the violence. The conflict intensified after the state government signed agreements in mid-2015 to set up mega steel plants in the region.

Activists say that to implement these agreements, the government had to weaken the rebels. Pledging to “eradicate Maoists from the region” by the end of 2016, the police launched an all-out attack against everyone they felt were Maoist sympathisers. 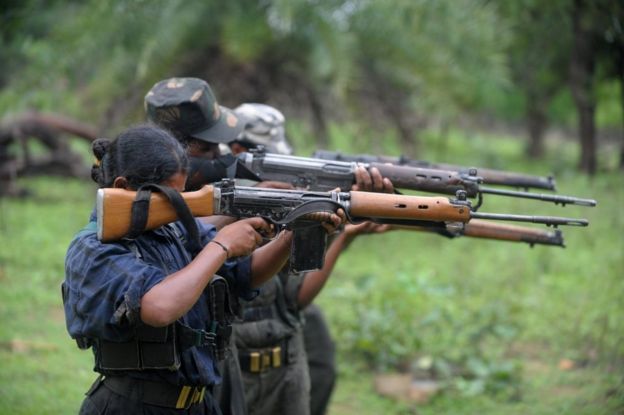 Maoists say they are fighting for the rights of indigenous tribespeople and the rural poor. Getty Images

“Under the garb of attacking those supportive of the Maoist cause, the state began to indiscriminately target innocent tribal groups, so they could be coaxed into leaving their lands and migrate,” said Bastar-based Aam Aadmi Party leader and human rights activist Soni Sori.

“In order for the state to win its bloody war against the tribal groups, any witnesses to their exploitation needed to be removed,” she added.

Journalists in Chhattisgarh are often the only credible source of information from far-flung areas.

The northern and southern parts of the state have many remote villages, which are often unconnected by roads. In these forest-covered villages, people speak tribal languages, making local journalists, who work as freelancers for national newspapers, significant news gatherers.

When tribal journalist Somaru Nag was arrested and charged with “anti-state activities” in July 2015, it largely went unnoticed. His family was informed about the arrest after three days.

But activists started seeing a pattern after more journalists were subsequently arrested. Santosh Yadav, a freelancer for a Hindi newspaper, was arrested last September on more severe charges than Mr Nag.

“There was a lot of pressure on him to become a police informer and report on Maoist movements in his area,” said Isha Khandelwal, Mr Yadav’s lawyer.

“He had made the administration uncomfortable by reporting on state excesses,” she told the BBC.

However, Amit Kataria, the district collector of Bastar, insisted that Mr Yadav was a Maoist.

Mr Yadav’s arrest was enough to make other journalists anxious.

On 10 October, about 300 journalists from all over the state protested in the capital city of Raipur. They sought the release of their arrested colleagues and demanded a legislation to protect journalists. The government did not respond.

The protest was repeated in December in Bastar’s largest commercial city, Jagdalpur. The state gave meek assurances, but nothing significant was announced.

In January, a group of men belonging to a civil vigilante group began harassing Malini Subramanium, a contributor for news website Scroll.in. She was later forced to leave Bastar. 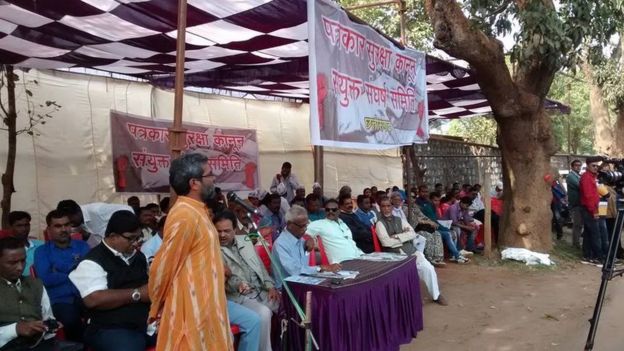 Journalists in Chhattisgarh want a law to protect their colleagues

BBC Hindi’s Alok Putul got into trouble for his reports over the threats to Ms Subramanium.

He was also investigating an alleged extrajudicial killing in Darbha Valley in Bastar when he was forewarned of a threat. A month later, Mr Putul was forced to move to Raipur to ensure his safety.

In March, within a span of a week, two journalists – Prabhat Singh and Deepak Jaiswal – were arrested on different charges.

The four arrested journalists continue to be in jail.

In a report released in late March, the Editors’ Guild of India said they could not find “a single journalist who could claim with confidence that he/she was working without fear or pressure”.

“The state government wants the media to see its fight with the Maoists as a fight for the nation and expects the media to treat it as a national security issue, and not raise any questions about it,” the guild said in its report.

The fall of journalism in Bastar

In a press conference in Raipur in February, the Inspector General of Police of Bastar region, SRP Kalluri, said he expected journalists to aid his fight against the Maoists.

“We don’t care about the national media. You have a different way of looking at things. We work with the media in Bastar, that sits with us, eats with us, and comes in helicopters with us,” he said. 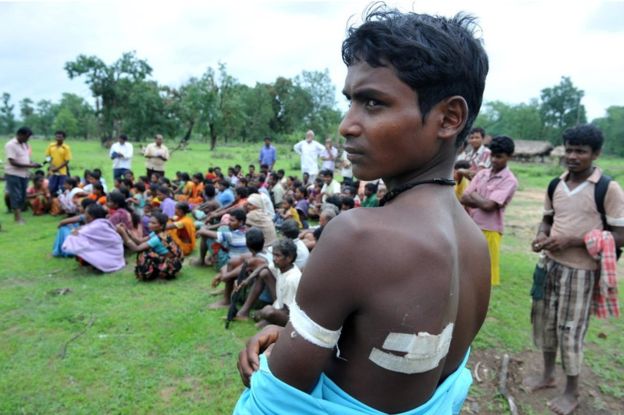 Villagers are often caught in the crossfire between Maoist rebels and security forces in Chhattisgarh. Getty Images.

With several Hindi newspapers in circulation in Bastar, there is no dearth of information. However, what kind of information reaches the ordinary man in the region needs inspection.

With hotels in Jagdalpur denying rooms to journalists and their phones being tapped indiscriminately, gathering news has become a challenge.

“Now, it is getting tougher for those from Delhi and other places to come to tell our stories,” he added.