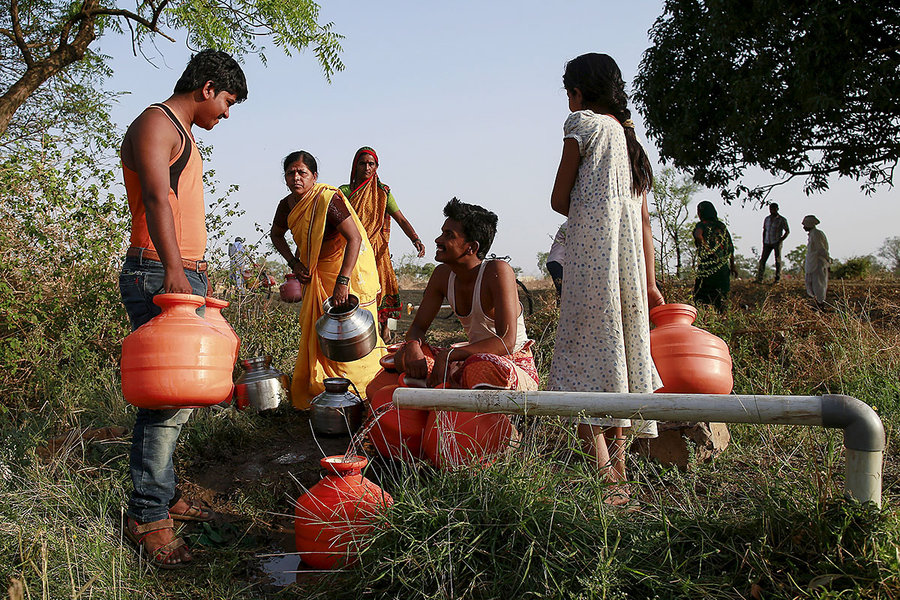 June 29, 2017 Mandya District, Karnataka, India—Sowbhagyamma wears her husband’s checked shirt on top of her sari. Tying a towel to her head so that it fully covers her thick black hair, she plunges into a large swamp of weeds.

“This is dirty work. I want to cover my body as much as possible,” she explains.

Sowbhagyamma is one of dozens of women working under the scorching sun every day to clear weeds, mud, and pebbles from a 6.5-acre plot in the Mandya District of southern Karnataka state, India.

“Only older people in this village remember that this used to be a lake,” says Shankrappa Gowda, the contractor for project.

Three thousand women are enrolled in the effort to revive lakes, ponds, and irrigation tanks in 31 villages across the district – crucial work in a region facing drought for the third year in a row, the worst in decades. Today, the lakes are just dry, empty beds. But cleared of the silt that’s accumulated over the years, the lakes will store more rainwater, they hope – when it rains again.

India relies on two monsoons: the southwestern and the northeastern. Neither produced much rain last year, leading to a severe water crisis in India’s southern states – a region home to more than 150 million people. In April, the local government announced that water would be provided only for drinking purposes. Reservoirs in the region’s five states had just 8 percent of their total storage capacity in early June, according to a report from the Central Water Commission. In Karnataka this spring, all irrigation tanks in several districts went completely dry.

Southern India relies heavily on agriculture for employment, and its states are large cultivators of rice, a staple grain. Now, thousands of acres have been left waterless. In just over a year, more than 500 farmers’ suicides have been attributed to drought-related woes.

It’s a problem that touches almost everyone. But “when the farm community is affected, it is always the women who get their hands dirty to get work done,” says Sowbhagyamma.

‘We have to do something and do it fast’

The women in Mandya decided to revive age-old methods of water storage, like desilting lakes and ponds, to replenish groundwater and ensure water for irrigation. On any given day, about 30 women take to the waterbeds, now dry, using spades and shovels to dig up silt and mud. Shovels full, they trek about 200 feet to deposit it, then return – back and forth under the sun, all day. In about a month, they will have created a depression the size of a soccer field: a new pond in which rainwater can accumulate.

It all started with one woman: Chandramma, of the Kalaburagi district, who purposefully strode into a weed-covered area last October to clean it. “People thought she was mad,” says KS Vimala, secretary of the Janawadi Mahila Sanghatane, an organization working with the women to clean the lakes of Karnataka. But soon, people saw the value of what the 67-year-old woman was doing. The tract of land she cleared now holds enough water to serve the purposes of 120 neighboring households.

But it took a long time for people in other parts of the state to duplicate this experiment. It was only in March that a women’s team in Mandya district began to desilt lakes. Another began to do so in Kolar district, about four hours northeast, only in May.

In the past, the women in Mandya said, they never had to dig borewells or tubewells to obtain water. But in the past five years, almost all the houses in the village have needed to dig one.

“That is when we realized we have to do something and do it fast,” says Ramgamma Bevanahalli, who is working on lake rejuvenation in Kolar. They drew inspiration from Chandramma.

Mr. Gowda recruits anywhere between 50 and 200 women per day, who earn a daily wage of about $1.80. A government welfare scheme for manual labor, the Mahatma Gandhi National Rural Employment Guarantee Programme (MGNREG), is paying for the women to rejuvenate these water bodies. But the women had to fight with the administration to ensure their work was covered under the program.

“They wanted to use the money from MNERGA for other infrastructure projects like road construction,” says Ms. Bevanahalli. “But, we insisted that they should pay for work related to water bodies. This is what we need the most,” she added.

Their next fight was to get the authorities to pay them on time – which some women say continues to be a battle.

On March 23, Irrigation Minister of Karnataka T B Jayachandra announced that 34 of the 176 districts in Karnataka have seen improvement in groundwater levels – thanks, in part, to desilting.

“It is important that the rejuvenation of water bodies benefit women,” says S. Vishwanath, an expert in water resources management who runs the Rainwater Club, an organization encouraging people to collect rainfall. “Instead of working on water bodies which help in the irrigation of lands, they should first work on those tanks that provide drinking water,” so women do not have to walk as many miles to fetch water, he says.

“The question to be asking is, ‘Where are the men in this?’ ” he adds, suggesting that they have left the collective problem for women to solve on their own.

Politicians and judges, too, have a role: for more than 60 years, Karnataka and the neighboring state of Tamil Nadu have fought legal battles over sharing water from the Kaveri River, the lifeblood of south India – battles that have reached the Supreme Court, and sometimes spark real violence, as protesters take to the streets over rulings to release or withhold more water.

But in Mandya, at least – more than 1,300 miles from the Supreme Court – the women are toiling away, one shovelful at a time. Temperatures reach up to 110 degrees in the summer months of March, April, and May in the Kaveri basin. But they continue dawn to dark, with a break only for lunch.

“We will do anything to save our crops,” said Sowbhagramma.