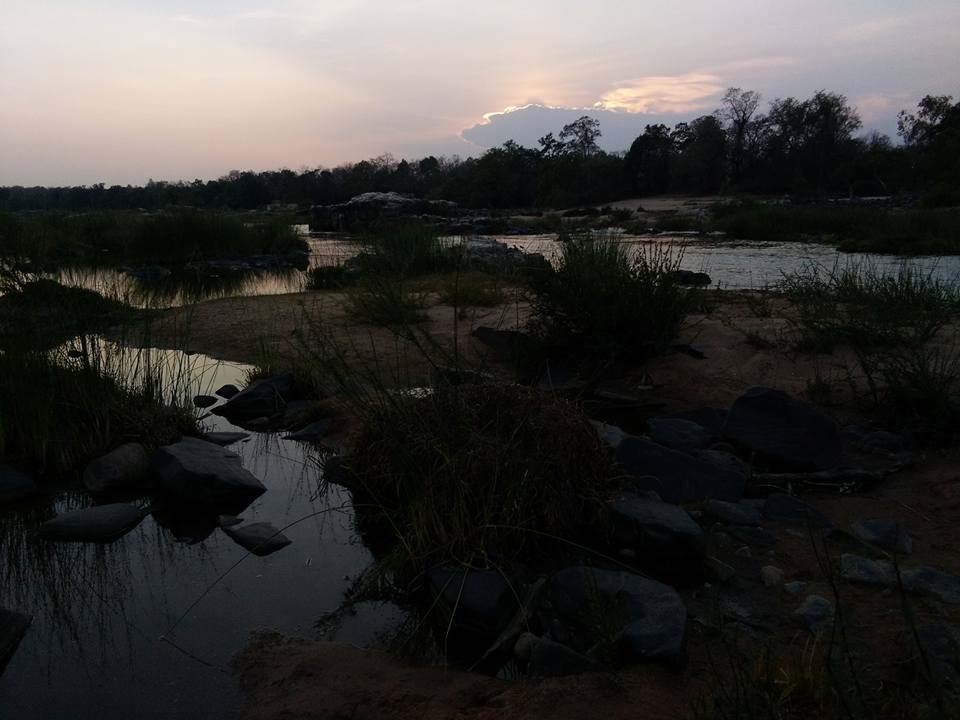 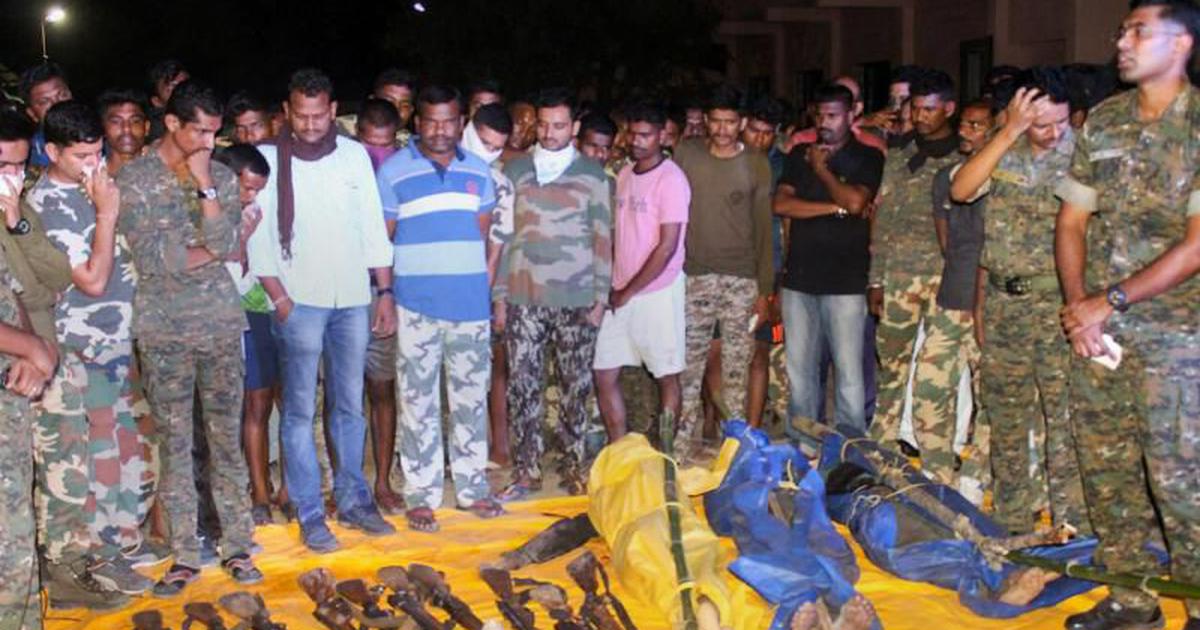 In the front yards of all homes in Boria village of Bhamragarh tehsil in Maharashtra’s Gadchiroli district, some poultry, cattle and armed C-60 Commandos shuffle around. The commandos, Adivasis recruited into the state police specifically to fight Maoists, are the latest addition to their households.

On May 5, at a house bordering the village’s paddy fields, a woman was drawing water from a well. Approached by this reporter, she dropped her aluminium bucket and stared at the commando in her front yard for just a second before running indoors.

Boria has 45 houses and at least 60 commandos. The neighbouring Kasansur village has a similar security presence. “They have been in the villages since the fake encounter began drawing attention,” said Lalsu Soma Nogoti, a Zila Parishad member.

On the morning of April 22, a team of police and paramilitary personnel gunned down over a dozen alleged members of the outlawed Communist Party of India (Maoist) in the forests between Boria and Kasansur. The two villages, four kilometres apart and connected by a narrow jungle road, are within the jurisdiction of Tadgaon police station. The next day, the security forces killed six more people about 80 km away. In subsequent days, as more bodies were discovered, the toll from the two encounters rose to 40.

A commando said that since the tip-off that led to the killings had come from the villagers, they needed security. Since he was not authorised to speak to the media, the commando asked to remain anonymous.

Gadchiroli is no stranger to such battles between the state and the Maoists. The rebels have been opposing large-scale mining and industrialisation in the region for over four decades. In recent years, they are said to have turned Gadchiroli and Bijapur district across the state boundary in Chhattisgarh into their strongholds. The two districts are separated only by a river and thick forests.

In a statement, the Maoists described the killings as the “biggest blow” to the “Gadchiroli revolutionary movement” since it was launched 38 years ago. The police claimed them as one of their “biggest successes” ever against left-wing extremists in central India.

However, there are different versions of what exactly happened on April 22 and April 23.

On April 22, the police claim, they were tipped off about a “Maoist camp” in the forests. They ambushed the guerrillas and killed 16 of them. The following day, they killed another six Maoists about 80 km to the south at Rajaram Khandla in the Jimalgatta forests. On April 24, they recovered 15 bodies from the Indravati river. These bodies, the police alleged, were of other Maoists killed on April 22. Subsequently, three more bodies were found in the river. So, in all, the police claimed to have killed 40 Maoists.

The Maoists contested this claim, saying only 25 “are recognised by us and 22 of them were party cadre.” The three recognised non-cadres were ordinary villagers, they said in a statement that was issued on April 26 but reached the media on May 5. About the rest of the people killed, the statement did not say anything.

Both the Maoists and the police, however, agree that at least three senior rebels, who allegedly had a combined bounty of Rs 86 lakh on them, were killed. Sainath, also known as Dolesh Madhi Atram, was commander of the Communist Party of India (Maoist)’s Permelli Dalam. The Gadchiroli police chief Abhinav Deshmukh claimed Sainath had been promoted as divisional committee member sometime before he was killed. Srinu and Nandu are said to have been ranking members of the party. Nandu was reportedly killed in the Rajaram Khandla encounter.

The youth never got to the wedding.

On April 27, two days after their parents filed missing persons reports at the police headquarters in Gadchiroli, they discovered that their children were among those killed in the “encounter” in Kasansur-Boria on April 22. The police claim they were being recruited by Sainath. “It is not true, but even if it were, why kill them?” the father of one of them questioned. His identity is not being disclosed for security reasons.

Gattepalli’s residents believe their children, aged between 16 and 21, were ambushed in the jungles in the intervening night of April 21 and April 22 and killed by the commandos. “Later, when the police found they had killed innocent youth from Gattepalli, they tried to add their deaths to Maoist encounter deaths of April 22,” said a village elder who asked to remain anonymous.

Now Gattepalli, like Kasansur and Boria, is patrolled by C-60 Commandos.

These villages are used to seeing Maoists walk their muddy streets. “We have to feed the Maoists if they ask us to when they stop by,” said Rekha Atram in Gattepalli. “There is no way we can refuse them food and water just as we cannot refuse the police food and water. They are both armed.”

She was walking in the dead of the night to her brother’s house a few meters away as the commandos were spending the night of May 6 in her home. “My parents thought it was safe for my sister and me to spend the night away from the house because three commandos are staying there,” she said.

The C-60 Commandos, first raised in the early 1990s, are a district-level force like the District Reserve Group in Chhattisgarh. The Greyhounds of Telangana and Andhra Pradesh and the Special Operations Group of Odisha, both of which are anti-Maoist forces are well, are state-level outfits.

While some of the senior Maoist leaders operating in Gadchiroli and Bijapur are from Telangana and Andhra Pradesh and are thus not well versed in the local languages of Gondi and Marathi, the C-60s tend to know both and are more familiar with the traditions of the region.

Remains of the ‘Maoist camp’ by the Indravati. Photo credit: Raksha Kumar

Indravati is a seasonal river originating in the forests of central India. It runs almost dry during the harsh summer months of April and May – Gadchiroli and the neighbouring district of Chandrapur have already recorded temperatures of 45-48 degrees Celsius this year – and gets flowing again when the rains come in June.

On the prickly hot sand that is the dried-up river’s bed now, a torturous walk of six kilometres from Boria leads to the Tumargunda forest in Bijapur. “On one side of the river is Maharashtra and on the other is Chhattisgarh,” said Nogoti.

In the jungles on the Chhattisgarh side is the alleged encounter site. “Technically, this encounter site falls in the jurisdiction of Bedre and Pharsegarh police stations in Bijapur,” said a Bhamragarh gram sabha leader who spoke anonymously. “But all the media have got it wrong because no one bothered to trek through the river onto the other side.”

A huge rock lies by the bank and a 200-meter semicircle around it was the site of the alleged encounter. There are bullet marks on tree trunks, some empty cartridges are strewn on the ground and a few green plastic bottles wrapped in cloth to keep the water cool are lying around. Steel cups for tea are in a heap and some newspapers of April 21 are stuck to the wet mud.

While the police have presented these articles as evidence of a Maoist camp, a fact-finding team of activists was not convinced. “Important evidence of the alleged encounter, including letters, photographs and identity cards appear to have been left lying around for days after the encounter,” the team said in its report. “No photographs of the original site or that of the bodies had been made available during the press release by the police on the 22nd April 2018. It also seems suspicious that 15 bodies were found on 24th April, two days after the said encounter, and all at the same spot”.

Some former policemen with experience in anti-Maoist operations have also questioned the police’s story. “If there were two DVC level leaders, there is no way they would not have had sentries keeping watch around the area,” said a former policeman in Gadchiroli who requested to remain anonymous, referring to the senior Maoist rank of divisional committee member. “The sentries alert the leaders much in advance so they can flee.” 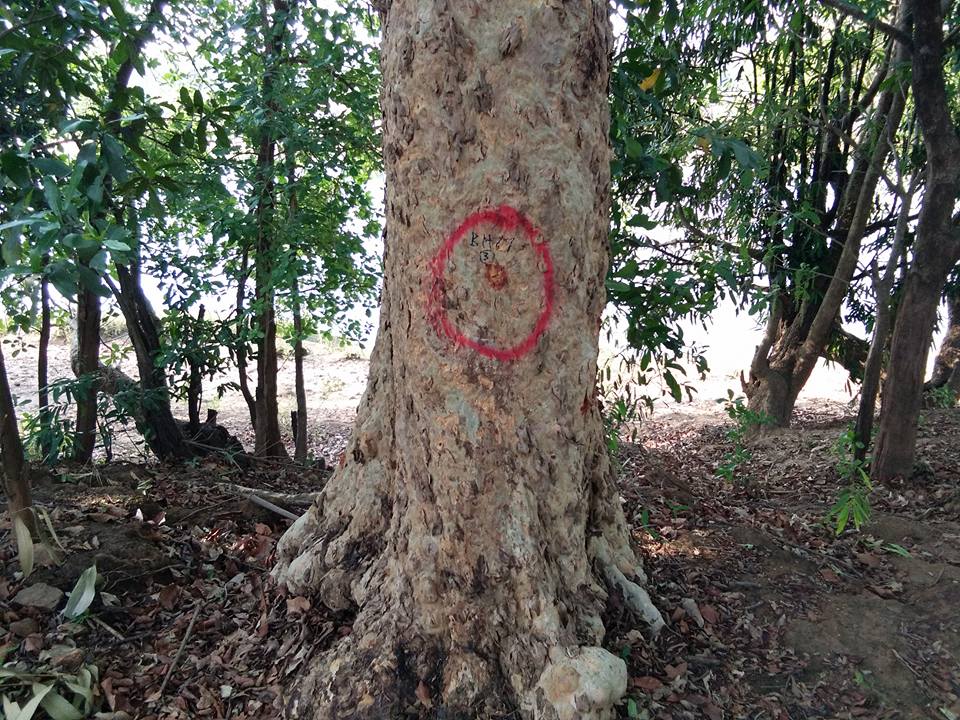 A bullet mark on a tree near the site of the killings. Photo credit: Raksha Kumar

The second encounter in Rajaram Khandla raises more questions. One of the six people killed was identified as Nandu from Arkapalli. His father Buchcha Malla Atram said a fellow villager, Jairamlinga Atram, got a call from Gadchiroli police station on April 22 saying Nandu had been captured. Arkapalli is about 15o km from Gadchiroli town.

When Buchcha Malla Atram was informed he decided to go meet his son the next day. “But on April 23, we got a call saying our son had been killed in an encounter in Rajaram Khandla,” he said.

Nandu’s sister’s Lacchi Atram asked, “When my brother was captured, why was he not produced in court?”

She had not seen her bother since 2004 when he joined the Maoists. “I would have loved to see him at least once,” she said.

Nandu’s father also said when his son’s body was handed over to him it was badly decomposed. “It had a massive axe mark on the right shoulder,” he added. “Why was there an axe mark if they shot him in an encounter.” 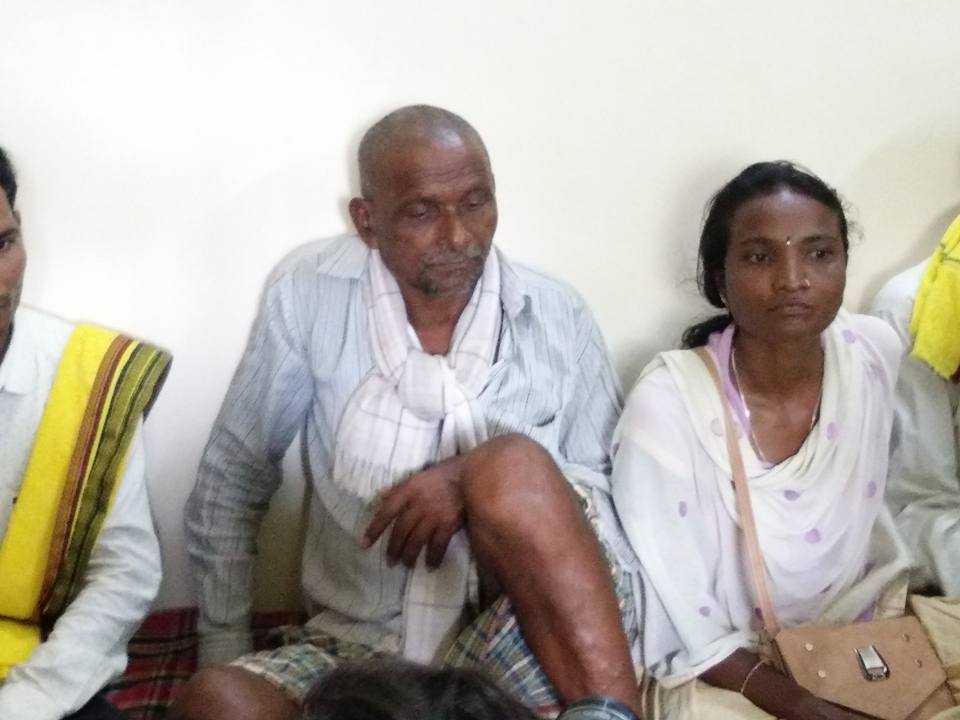 Shekhar Singh, district collector of Gadchiroli, said he has taken note of the questions raised about the authenticity of the encounters. On May 1, Singh ordered separate magisterial inquiries by sub divisional magistrates of Etapalli and Aheri tehsils, where the two encounters took place.

According to the 2014 Supreme Court judgement in People’s Union of Civil Liberties vs State of Maharashtra, there are guidelines to be followed to investigate police encounters. One guideline states:

“If the family of the victim finds that the above procedure has not been followed or there exists a pattern of abuse or lack of independent investigation or impartiality by any of the functionaries as above mentioned, it may make a complaint to the Sessions Judge having territorial jurisdiction over the place of incident. Upon such complaint being made, the concerned Sessions Judge shall look into the merits of the complaint and address the grievances raised therein.”

However, with such a heavy presence of C-60 Commandos in Boria, Kasansur and Gattepalli, no family member of the accused will come forward to lodge a complaint with the sessions judge if they are dissatisfied with the enquiry, said the lawyer Jagdish Meshram.

On the afternoon of May 5, about three dozen people gathered in Boria and shouted slogans against the Maoists. They also carried hand-written placards reading “Naxal peedit, Gadchiroli” [Victims of Naxals].

Meenu Atram, a teacher from Gadchiroli town, was among them. “Why do people not notice that the Maoists unleash terror on us too?” she asked. A flurry of human rights activists rush to whenever a few Maoists are killed and draw the attention of the authorities, she complained, but they ignore the violence the Maoists “commit against us”.

Just a few yards behind Meenu, an Adivasi woman stood inside her house, holding her infant son. A few commandos stood in her front yard, chewing tobacco. 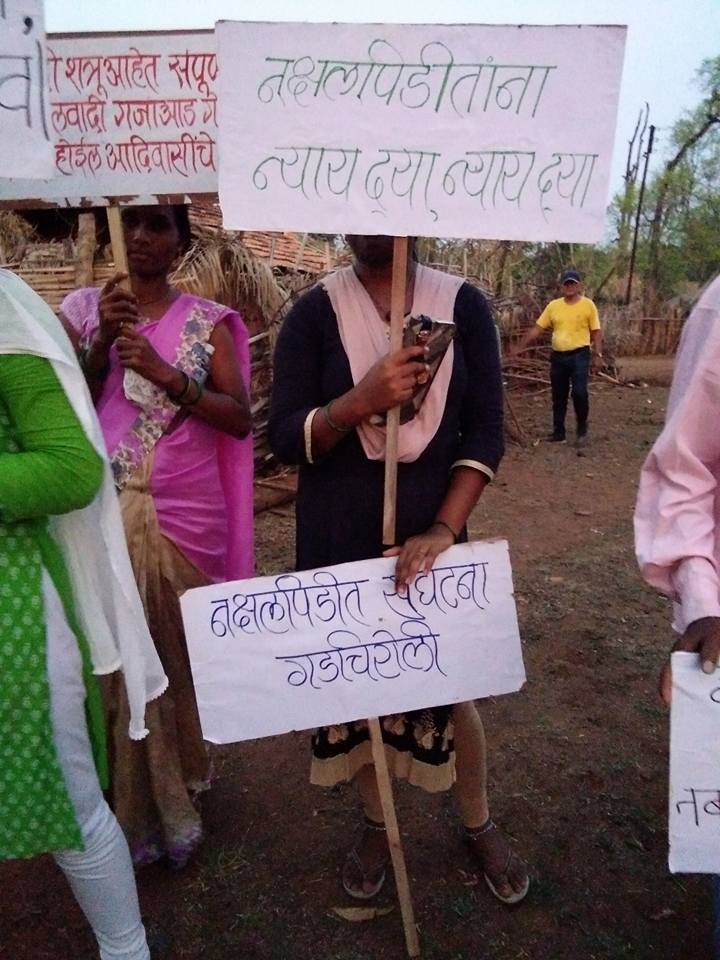 A protest against the Maoists in Boria. Photo credit: Raksha Kumar

Published in: Scroll.in
Published on: May 12, 2018
Link: https://scroll.in/article/878469/after-biggest-maoist-encounter-commandos-fear-and-troubling-questions-stalk-gadchiroli-villages