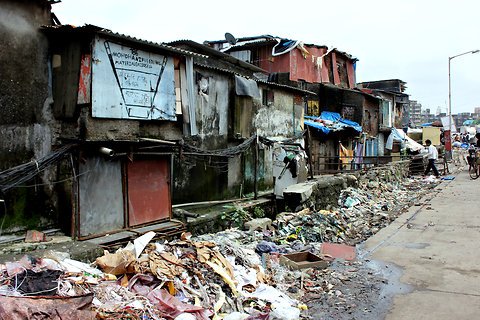 By Raksha KumarNovember 15, 2011 No Comments

Piles of garbage in front of shanties near Mahim East, Mumbai; the cost of these dwellings ranges from $35,000 to $58,000. Photo: Raksha Kumar

You reach the house of Indu Prakash Vaidya, a 32-year-old housewife, by trekking down a two-foot-wide alley through an inch of stinking, wet mud, filled with plastic bags and kitchen scraps.

Her 200-square-foot shanty, in Rajiv Gandhi Nagar, in the Dharavi neighborhood of Mumbai, has faulty electrical lines, no water supply and a non existent sewage system. Still, Ms. Vaidya’s house is her most prized possession. “If I decide to sell it, it will fetch me more than Rs 10 lakh” rupees, or about $24,000, she estimates, based on the offers she has been getting.

Ms. Vaidya isn’t alone. Many of Mumbai’s slum dwellers, some 60 percent of the city’s 21 million people, are living in hovels that suddenly command high prices.

An aerial view of Mumbai, where wealth and extreme poverty have long been close neighbors, would show expensive high-rises poking through a mass of slums. In a city where commuting is a battle that millions face every day, slums are well-connected and are easily accessible to India’s finance and entertainment hubs. These neighborhoods are among the few spaces where builders and real estate investors can expand, as the city’s population has almost doubled in the past 20 years.

Ms. Vaidya’s house is a single room, with a miniscule bathing area in one corner. A television is mounted above the three small cupboards that store all of the five-member Vaidya family’s belongings. The cement floor doubles as a bed for the family when a thin coir mat is unrolled at night. In another corner, Ms. Vaidya has built a makeshift kitchen – a two-burner gas stove, some jars of curry powders and some grains. She moves it around depending on what part of the roof is leaking at any given time.

“Shanties as small as 120 square feet, located on the 90 Foot Road that is perpendicular to the Bandra Kurla Link Road, are as expensive as $93,000,” says Dinesh Prabhu, who owns a construction company and has conducted an extensive survey of Dharavi real-estate prices. The 90 Foot Road has commercial outlets spilling out onto the streets, frequent cattle blockages, and old worn-out buildings just behind the shanties.

Sharad Mahajan of the Pune-based nonprofit organization Mashal, which conducted extensive surveys on slum real-estate prices, says that no one can put a value on these slums — “all I can say is, given the current real-estate rates, those slums are invaluable.” Most slums that are said to be “gold mines” can be found in places like Dharavi, Colaba, Borivli, Andheri, Jogeshwari and Goregaon in the central parts of the city or in the western suburbs.

“We can reach Colaba in less than an hour, people would kill to be in a place like this,” said Sundar, a slum dweller who lives near the 60 Foot Road intersection in Malad East. “There are four local train stations close by. And the bus stop is a stone’s throw away,” he said.

The rising price of Mumbai’s slum housing is even more surprising considering that many slum dwellers don’t officially own the land on which their home is built. Amid unchecked migration, Mumbai’s slums often began as clusters of illegal dwellings on public property, including parks, roads and pavements. Local and state governments, seeing potential votes in the slums, helped to make them permanent by providing them with electricity and drinking water.

“Today, these documents can be obtained easily by bribing the concerned officials,” says Hari Ram, a real-estate agent who works in Malad East. “I can get those for you right now, if you wish,” he said. Despite the fact that more than 50 shanties share a toilet in some slum neighborhoods, the average price of a 300-square-foot shanty in central Mumbai is 20 lakh rupees ($46,000), he said.

A common toilet facility shared by over 300 people every day, in a Mumbai slum. Photo: Raksha Kumar.

While many of these shanties are home to daily wage laborers and poor migrants, other residents are people with better-paying jobs who could move to better housing, but stay for the convenience.

“It is simpler and less expensive to live here,” says Sankaralingam, a plastic merchant and a resident of Dharavi for more than 40 years, who estimates his annual income at around 4 lakh rupees, or $9300, with which he could easily move to a non-slum area.

For now, Indu Prakash Vaidya is holding on to her home, which is almost two feet below ground level and invariably floods during heavy rains. But she is certain she cannot hold on to her house for long. “I have three children, and their education and well-being need to be taken care of. Financial constraints can push me to sell this shanty in the future, then where will I live? I will have nowhere to go,” she says.