In Bihar, a land programme for Dalits improved many lives – until Nitish Kumar allied with the BJP

By Raksha KumarFebruary 22, 2018 No Comments

His government has eased off on Dakhal Dehani, which seeks to help Dalits reclaim their occupied land, allegedly to please his ally’s upper caste support base 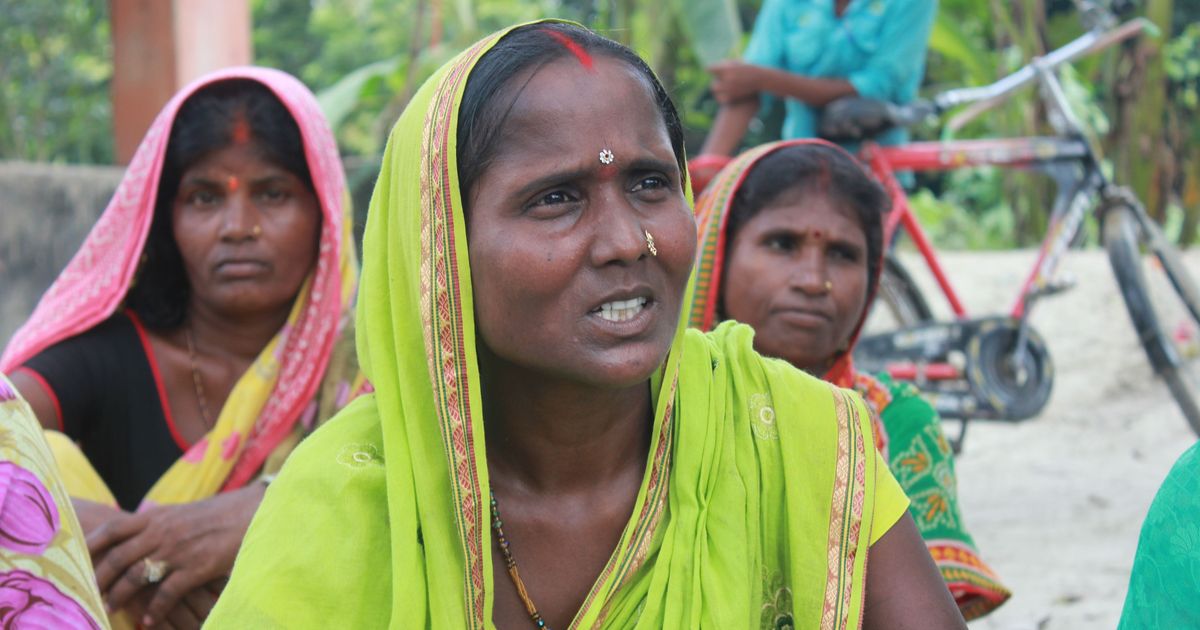 Lalti Devi in Beria village of Bihar’s East Champaran district describes how her family was beaten up and driven out of their land. | Raksha Kumar

It took the Baitha family in Chakniya village of Chakia block in Bihar’s East Champaran district three decades of struggle to get possession of an acre of land that the government had given them in 1987. Along with the Baithas, 11 other Dalit families had received tracts of unused land which they finally got hold of on February 4, 2015.

They had made several attempts to claim their land in the past, only to be chased away by the mostly upper caste families that had occupied it. But in 2015, guarded by police and civil officials, the Dalit families began building homes on their land. Subsequently, they began to cultivate it as well. Sanjay Baitha grows wheat and corn on his acre now. “When we occupied our land we felt as if we were creating history,” he said.

What helped them was a government programme called Operation Dakhal Dehani, which was aimed at helping Dalits take possession of land they had titles for.

The land that the Baithas and 11 other families of Chakia received had been leased to the Chakia Sugar Mill. After the mill went bust in the mid-1980s, the government claimed back the land and gave the 12 Dalit families titles to it. But the mill’s owners refused to vacate the land, said Baitha. Until, that is, the administration stepped in two years ago.

Under Manjhi’s predecessor, Nitish Kumar, the Bihar government had launched a programme in April 2013 to distribute three decimals of land – a decimal is one-hundredth of an acre – to the state’s Mahadalit families to build houses. It was later revised to five decimals. Dakhal Dehani, in contrast, did not provide new land. It only sought to help Dalits get hold of the land – provided by the state to build houses, called homestead land, as well as farmland – they had ownership papers for but that had been occupied by others.

Manjhi did not remain chief minister for long. He had been installed by Kumar in his place when he resigned in May 2014, owning responsibility for his Janata Dal (United) party’s poor performance in the general election. In February 2015, Kumar attempted to take back the chief ministership. By then, Manjhi’s government had initiated programmes such as Dakhal Dehani and rigorously implemented schemes that promised homestead land for Dalits. This had won him popularity, according to MN Karna, former professor at Tezpur University and AN Sinha Institute, Patna. Manjhi did not vacate the post for Kumar, causing a split in their party. Kumar anyway returned to power on February 22, 2015 after proving his majority in the Assembly.

“Dakhal Dehani continued even under Kumar,” said Amar, founder of Samajik Shodh Evam Vikas Kendra, a non-profit in Chakia. Precisely how many people it benefited, however, is difficult to ascertain. The websites of all 38 district administrations proudly declare dates for camps that Dalits could visit and claim their land – but there is no information about the beneficiaries. Several attempts to contact the Department of Revenue and Land Reforms in Patna to seek such details proved unsuccessful. In Chakia block, according to the records kept by local activists, 40 families had taken possession of their farmland until June 2017.

Bihar’s Economic Survey for 2014-’15 mentions the programme only in passing. “Operation ‘Bhumi Dakhal’ has also been launched to restore possession of land to those families who had been dispossessed of such land,” it reads. While it discusses other land distribution programmes at length, details about Dakhal Dehani are conspicuously absent. In the following year’s Economic Survey as well, the emphasis is on providing land to Mahadalits. “Under the scheme of homestead land to Mahadalit families, 2.34 lakh families have already been covered against a target of 2.43 lakh families, involving 7,061 acres of land,” it reads. There is merely a passing mention of Dakhal Dehani. In 2016-’17, there is no mention at all of the programme in the Economic Survey, even as it lists three schemes for providing land to the Mahadalits – Mahadalit Vikas Yojana, Grihsthal Yojana and Tribal Sub-Plan.

So, activists say, Dakhal Dehani is now in decline. A senior official in the revenue and land reforms department, who only agreed to speak on the condition of anonymity, confirmed that hardly any occupied land had been handed over under the programme in the past six months.

In July 2017, Kumar again resigned as the chief minister following differences with his coalition partner, the Rashtriya Janata Dal, and allied with the Bharatiya Janata Party. He was reinstated as the chief minister the next day. “This has changed a lot of the government’s priorities,” claimed Karn. It is now difficult for the government to have a clear pro-Dalit agenda, he explained, because it needs to keep happy the upper caste “Brahmin Bhumihar combine”, the core support base of the BJP.

Not just a lack of political will, the programme has also run into legal troubles.

Hutments of the Baithas and other Dalit families in Chakniya are a few hundred meters away from the homes of upper caste people. Photo credit: Raksha Kumar

East Champaran is one of India’s most backward districts. In its villages, caste segregation is still common. People belonging to the same caste live together and few marry outside their caste. The villages are structured to suit upper castes – their homes are closer to water bodies and fields, the roads in their neighbourhoods are better and, according to activists, they have easier access to village development funds.

Dalits generally live in the southern part of the village. “Because upper caste people did not want the winds that blow over Dalit homes to reach non-Dalit homes,” explained Amar.

In Chakniya, too, the Baithas and other Dalit family inhabit the southern part. Approaching the village, a cluster of three hutments comes into view. The rest of the homes are a few hundred meters away. “We are Musahars, the other villagers would never let us build our huts closer to theirs,” said Baitha. “More so now. Because we managed to successfully reclaim land that was rightfully ours, there is resentment against us.”

But for Dalits, the roadblocks to owning land are many. In Beria village, Chakia, about 30 residents gathered under a huge banyan tree to talk about how their lives had changed since the state programme to redistribute land started. While the women needed some nudging, the men began speaking in unison.

Lalti Devi described how the local sub divisional magistrate, the block’s executive and judicial officer, had settled a land dispute in her favour in March 2015. Her family of six sowed corn on the land. But within days, some strongmen from neighbouring villages turned up and ordered them out. When the Dalit family protested, they were ruthlessly beaten up.

Another Dalit family in her village had a similar experience. “In their case, they had appealed at the district level in the Commissioner’s Court,” Devi said. Although the court ruled in their favour, they were still unable to take control of their land.

Between 2014 and 2017, a local non-profit, Dalit Adhikar Morcha, had identified at least 150 such families in Chakia who had land documents handed to them in the 1990s but had been unable to take possession. The administration, however, has listed only 20 of them as eligible for land. As for the rest, the current occupiers of land have moved the courts. “The minute the fight goes to courts, costs shoot up,” said Amar. “And most Dalits cannot afford it.”

RK Khandelwal, commissioner of East Champaran, said the main problem was that Dalits feared the upper caste “dabangs”. No matter how much the administration helped them, he said, it would make little difference unless it was accompanied by wider social change.

One of the main legal tools at the disposal of Dalits is the Scheduled Castes and Scheduled Tribes (Prevention of Atrocities) Act, 1989. Its purpose is “to prevent the commission of offences of atrocities against the members of Scheduled Castes and Tribes, to provide for Special Courts for the trial of such offences and for the relief and rehabilitation of the victims of such offences and for matters connected therewith or incidental thereto”.

The Nitish Kumar government has set up an SC/ST police station at every district headquarters. For Dalits of Chakia, that is 30 km away in Motihari. “If the dabangs come and trouble you, you can go to that police station,” Amar told the villagers at Beria.

But most Dalit villagers, Amar said later, “do not know that such police stations exist”. “How will they access it?” he asked.

Moreover, Dalits cannot approach the police unless they have received a threat they can prove. Mostly, they cannot. “When we show our wounds to the police, they say we were beaten by our husbands,” said Devi. “It would be much easier if the government undertook land reforms and did not leave us at the mercy of the law we cannot enforce.” 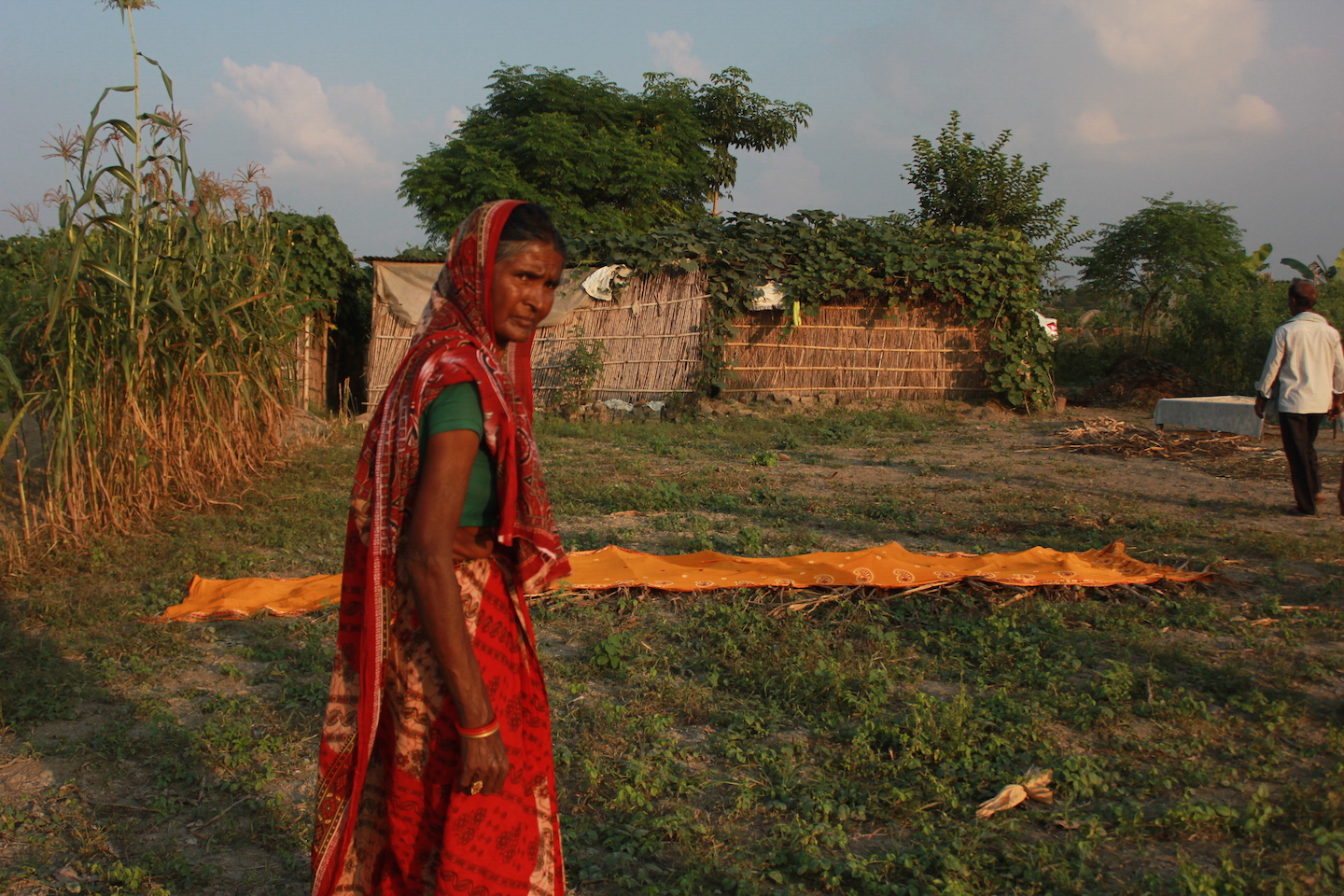 Attempts at land reforms in Bihar are not new. In the 1950s, when the Jawaharlal Nehru government initiated land reforms in the country, it encountered massive opposition in Bihar, where the ruling Congress party’s leaders were upper caste land owners. In the 1970s and 1980s, “land for landless” was the central demand of the Naxalbari movement, which was fuelled by the anger among agricultural labourers at their treatment by land owners and the general apathy of the authorities. It forced the state to initiate land redistribution, and many Dalits were handed land titles.

Baitha’s family, which now has 12 members, got the title to their acre in 1987. But they still built their hutments on common village land and farmland that belonged to Rajputs and Bhumihars, Baitha said. “Our parents could not dream of moving to land owned by upper caste people,” he said. “The piece of paper declaring them owners was of little value to them.”

In the 1990s, Lalu Prasad Yadav, a backward caste leader who had made land reforms a campaign issue, became the chief minister. His government distributed more such land titles among Dalits. Still, they remained owners only on paper. They were neither literate enough nor organised to take on the powerful upper caste land owners who occupied the land given to them. The authorities did not help much either. Meanwhile, with the backward castes getting more land, support for land reforms shrunk further.

Baitha’s family got their first chance to reclaim their land in 1993 when the patwari, or land records keeper, happened to mention to them that the sugar mill land was theirs. “Even though the sugar mill had shut, the land was retained by the owners,” said Baitha. “My grandfather, who was alive back then, was too scared to go ask for his land from the Bhumihars.”

In 2002, they tried to take possession of the land by building their mud huts there. “Fifty musclemen who we suspected were from the company came and threatened us,” Baitha said. “There was no violence because my family left.”

Three years later, Nitish Kumar took power and constituted a commission under D Bandhopadhyay – who had played major role in Operation Barga, a successful land reform in West Bengal – to suggest effective ways to implement land reforms. In 2008, the commission recommended allotting about 0.66 acres of farmland to most backward among landless agricultural workers. It also asked for a new law to give land to sharecroppers. The commission’s report was never implemented.