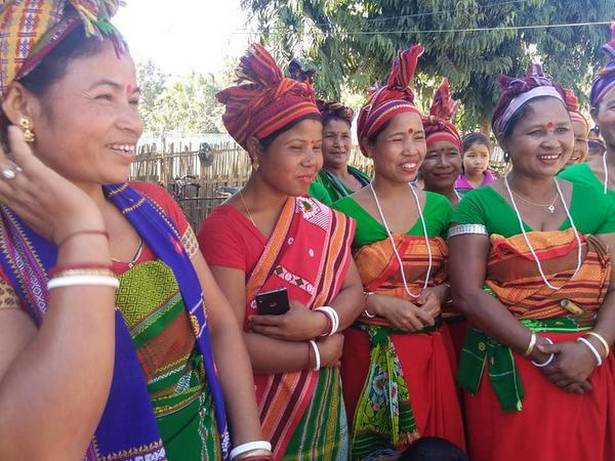 The Rabhas, so sure of who they were, where they came from, made me aware of my own urban rootlessness

A couple of months ago, I caught myself asking: “What is my identity?” A rather unusual existential question to be asking while sitting in the middle of a remote village set on the lush Assam-Meghalaya border. Especially unusual when you consider that I was enjoying a colourful and skilled theatre performance in this village.

A group of women dressed in traditional Rabha attire was spinning and whirling to a hypnotic, rhythmic beat. A village elder was singing the story of a wise bird. They were accompanied by folk instruments made of animal skin and bamboo sticks. I was munching on fresh fruits gathered from the surrounding forest.

Perhaps the loaded question had always been inside me, struggling to surface. And maybe sipping a glass of the heady, freshly brewed local liquor allowed the question to pop up in my head at just that moment.

Regardless, it got me thinking deeply about contrasting lives and identities. About how the identity of the Rabhas living in the remote village of Jimirigaon — and how do you define remote anyway — was so much in contrast with my own, a rootless, urban existence. The Rabhas seemed so much more sure of who they were, where they came from, and what they wished for from life.

The Rabhas are one of nine Schedule Tribes from the districts on the plains of Assam. The biggest concentration of their population is on the south bank of the Brahmaputra in the districts of Goalpara, Kamrup and Darrang.

I am in the village of Jimirigaon. Time seems to slow down here. And the identity of the Rabhas in this village is intrinsically linked to the slow pace of time. The process of living is savoured. The Rabhas have the look of satisfaction that comes from having reached the destination. They don’t appear to be in a hurry to reach somewhere, there’s no rush to do things, no struggle for survival.

As a city dweller, I am surrounded always by a stream of people hurrying through their lives; this seems normal to me. Rushing to catch a train, reaching work on time, finding time for entertainment and family. In the mad sprint, our identities — social, cultural, economic — get smudged. And the sole identity retained is that of a person rushing through life. There are many occasions when I don’t eat well or skip meals altogether because I have no time for it. Often, I am disoriented because I sleep in one city and wake up in another. I seldom get to see my loved ones because they are not my top priority in the long list of ‘to dos’. Staying still is not a part of who I am.

As we hurry through our urban lives, we say we are doing it so that we can form our own identity — become a doctor, engineer, fashion model. But when the pace of life consumes all, do we get close to what we set out to achieve? In Jimirigaon, the permanence of the tribal identity made me realise the transience of mine.

The village-dwelling Rabhas are who they are also because of the land they live on; which gives them livelihood and identity. Their food comes from these lands and forests. Their language refers to the soil they live on, the birds that flock the branches of these unique trees, the lakes that quench their thirst.

In contrast, it’s my transient relationship with location that is almost permanent. Constant movement seems to be my mode of living. Urban spaces are landless spaces. We live in vertical structures, separated even physically from the land.

I draw almost nothing from the land I inhabit at any point. On the move at all times, I barely have the time to learn about the history of the city I am in. Many times, I don’t speak the local language. I eat the same foods regardless of where I am. I use uniform, branded products across cities. And I enjoy the material comforts that all urban Indians of a particular socio-economic class get to enjoy.

On my way out of Jimirigaon, I encountered a construction labourer from Kerala who had come here on work. The juggernaut of “development” was slowly crawling towards communities such as the one in Jimirigaon.

It made me realise that while I was craving to halt, some of the younger villagers were yearning to run ahead. They wanted the freedom and anonymity and absence of history that urban spaces offer.

One such person was a dancer. We spoke, she did her best in broken Hindi because I could not understand either Assamese or the Rabha language. In a few minutes, the 17-year-old managed to tell me about her marriage to the man her father had chosen. Her craving for freedom was clear. We parted, each of us searching for new identities.

Published in: The Hindu
Published on: March 23 2019
Link: https://www.thehindu.com/society/jimirigaon-beats-the-clock-the-rabha-tribes-unhurried-life/article26607879.ece