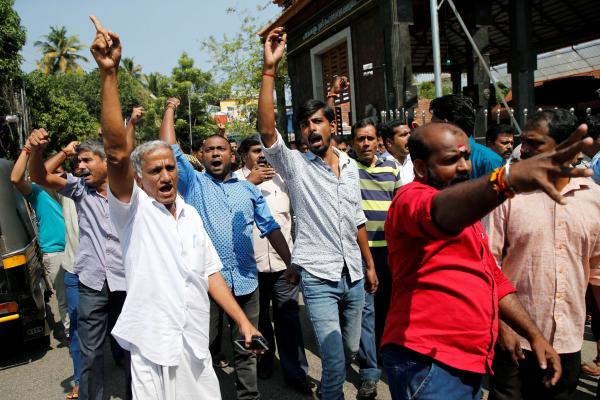 On New Year’s Day, more than 3 million women stood shoulder-to-shoulder across all national highways that crisscross the small southern Indian state of Kerala — 400 miles of smiling, excited, angry women formed what came to be called a “women’s wall,” protesting gender inequality and lack of access to the Hindu temple.

As the sun began to set, at around 4 p.m., women lined up on the streets. Some were holding placards in Malayalam in support of women’s entry into Lord Ayyappa Temple at Sabarimala, located south of the state, where women between the ages of 10 and 50 had traditionally been disallowed from entering.

“It was exciting,” said Nirmala V K, a resident of Kottayam district who was a part of the ‘wall.’ “I felt like I was being a part of something big and we could effect big changes.”

Considering that hundreds of thousands of women had to protest for hours merely to support their entry into a Hindu temple, one gets a sense of the high walls of patriarchy they were trying to breach.

Solidarity came in abundance; Nirmala said even her Catholic and Muslim friends joined in.

“After all, patriarchy is a part of all religions, so women have to unite to fight,” she said.

In September 2018, the Supreme Court ruled that disallowing women of “menstruating age” into the Ayyappa temple was unconstitutional. While the priests of Sabarimala temple claim the ban was an age-old custom, that custom only got legal sanction in 1965.

That law was challenged by Indian Young Lawyers Association, and the Supreme Court heard arguments in July 2018, 12 years after the case was first filed. While the government in Kerala supported the entry of women into the temple, the temple trust opposed it.

Ayyappa Seva Sangham, an organization in support of the temple, argued that the ban should be preserved so that other “similar customs” elsewhere remain undisturbed. Their claim was that Hindu temples across the country prohibit women from entering temples while they are menstruating, so making an exception for the Ayyappa temple would be problematic.

While any ban on menstruating women invites criticism, a significant difference was that the Ayyappa temple had a blanket ban for all women between the ages of 10 and 50.

“I am not religious,” said Beena Menon, a local school teacher from Kochi, who held hands with other women on Jan. 1. “I think religion is a personal issue. But, if women want to go to a temple, they should be allowed to.”

“It is a question of gender discrimination,” she added.

India houses a potpourri of religions, castes, sub castes, and denominations. While 80 percent of Indians are considered ‘Hindus,’ many smaller denominations, castes, and tribes are clubbed under the term. When the Court passes a judgement on one particular religious group, it could have a bearing on other groups as well.

Article 26 of the Indian Constitution gives protection to religious denominations (those sets of people who have a separate identity and practices despite falling under the larger umbrella of a religion) as opposed to religions. (There is a separate Article that guarantees right to freedom of religion as well). The temple trust claimed that they were a separate denomination of Hindus and they had a Constitutional right to manage their own affairs.

According to Supreme Court lawyer and Advocate on Record Pallav Mongia, the Court felt that the practice was discriminatory toward women and therefore had to be struck down.

A Supreme Court verdict usually means an end to the debate. However, since the Hindu Fundamentalist party, Bharatiya Janata Party, came to power at the Centre, certain violent activities have gotten tacit State sanction. For instance, when Muslim men were lynched by Hindu mobs on suspicion of illicit bovine trade, the central government or law enforcement agencies did not act soon enough. In many situations, they did not act at all. Such impunity gave confidence to Hindu organizations in Kerala to hinder the process of implementation of the Supreme Court verdict on the Sabarimala temple.

Protests against the Supreme Court verdict broke out all over the state. Violence ensued, as groups protesting the ruling erupted across the state.

The government in Kerala is headed by the Communist Party of India (Marxist), and the wall was their answer to the violence. In solidarity with the women, thousands of men also formed a parallel wall.

A few days later, violent fights between BJP and CPIM parties gained momentum. Houses of leaders of both parties were attacked and shops were vandalized in many parts of the state.

“On the 1st of January, we thought we have made it clear to the world that the women of Kerala support the Supreme Court verdict,” Nirmala V K said. “But, a day later when two women entered the temple and violence continued, we realized that we have more work to do.”

The temple is not open all days of the year. When it first opened its gates after the verdict, many women journalists went to cover the story. They were heckled, physically attacked, and their vehicles were pelted with stones.

Sabarimala Karma Samiti, an organization of many Hindu Right Wing groups including the Vishva Hindu Parishad, advised news outlets to not send women reporters to cover the story.

Despite the threat of violence, or perhaps because of it, Bindu Ammini, 40m and Kanakadurga, 39, bravely entered Sabarimala Temple on Jan. 2. Some Malayalam newspapers reported that the police and the state government facilitated their entry. It was the women’s second attempt: On Dec. 24, the two women got close to the temple but were stopped by protesters.

Bindu is an assistant professor at the Thalassery Palayad School of Legal Studies, Kannur. She is a Dalit, a historically oppressed section of the society. The temple trust conducted a “purification” ritual after she entered. By implication, it means that the temple is for upper caste Hindus and that a Dalit woman is “impure.”

After living in hiding for many days, the women attempted to go back to their homes. But, Bindu’s family refused to accept her. When Kanakadurga reached home, she was allegedly attacked by her mother-in-law with a wooden plank and remains hospitalized in Kozhikode.

With the help of lawyers, they filed a petition in the Supreme Court seeking police protection for all women who enter the temple. The court is hearing the petitions. Meanwhile, there have been unconfirmed reports of other women having entered the temple.

Women have known for ages that their battle against patriarchy will be sustained, slow, and often disappointing. The 3,500,000 women who began the year with some hope, now see it crumbling. Some though, are charged up.

“Women have always faced adversity,” said R. Midhuna, a resident of Kochi. “That doesn’t mean we give up. We need to see this through.”